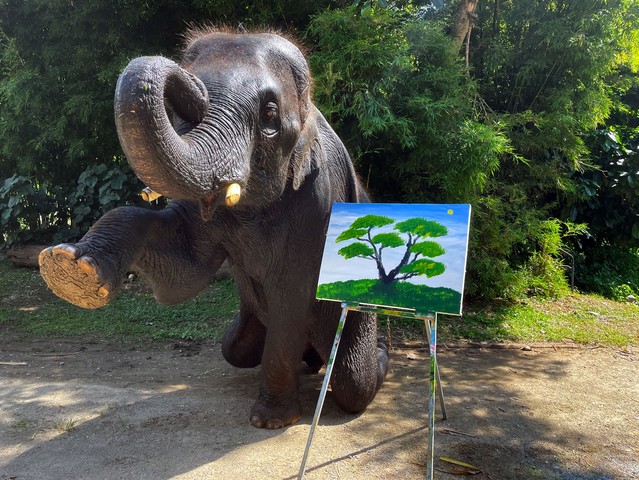 
Imagine if an elephant could show you what it sees, thinks and feels. Crazy thought?

An immensely talented 20 year old elephant named Suda, and a seven year old male counterpart named Tunwa can do just that ?? with paint ?? not just splashes of color either ?? but art with trees, animals, mountains, blue sky and other subjects beautifully rendered on canvas.

Before the pandemic, Suda and Tunwa were the star attractions at the Maetaeng Elephant Park & â€‹â€‹Clinic in Chiang Mai, Thailand, painting for dozens of visiting tourists at a time to raise funds to care for and feed more than 80 elephants. living in the park. Times were good.

Then Covid-19 hit, stopping tourism ?? the lifeblood and source of funding for caring for elephants. At first crippled by the events, the park quickly revolved and Suda the world famous painting elephant and Tunwa continued to paint for the health and welfare of their herd, but now for their website visitors. , Elephant Art Online, the original seller of Elephant Art in Thailand. Check out a sample of elephant art here.

Visitors who visit the site for the first time are often stunned by what they see. It doesn’t seem possible that an elephant could produce such beautiful works of art. And those who buy a painting are directly supporting the lives of Suda and all the elephants in the park who depend on the proceeds for food and medical care. Each painting is accompanied by photos and a video of the art in progress, in addition to a certificate of authenticity (QR Code). Elephant Art Online also offers free shipping worldwide.

Each painting takes just over four hours for an elephant to produce, including snack breaks and free time to wander the park and eat bananas, one of their favorite treats. Elephants never have to paint; when they lose interest, they come back later to start over.

Due to the popularity of non-fungible tokens (NFT) ?? digital assets representing real world objects like art (Tunwa and Suda paintings), music and videos ?? Elephant Art Online has founded an NFT branch called BitTrunks. BitTrunks recently released the world’s very first 1-in-1 NFT artwork, Tree of Life, made by Tunwa, along with a collection of 30 more pieces of authentic elephant paintings to purchase on OpenSea, the first and the largest peer-to-peer market for NFTs.

â€œThe value of every available artwork is immense, whether you’re a collector adding a crown jewel to your collection or a savvy trader looking to find a gem to resell,â€ said Dwain Schenck, Co-Director of BitTrunks . â€œFrom the moment a collector made a purchase from BitTrunks, she became the proud owner of what is easily one of the most unique NFTs in the world. From an investor’s perspective, buying an Elephant Art NFT is a bigger than life opportunity. . Our goal is to be able to use NFTs as a source of funding instead of relying on tourism. We plan to expand this concept and help other struggling wildlife parks in Thailand and elsewhere. “

Maetaeng Elephant Park was established in 1996 to help elephants that roam free but had nowhere to go after Thailand’s 1989 logging ban. Seeing an increasing number of elephants forced to roam the city streets and work in the illegal logging trade, the park decided to create a safe and friendly working environment where visitors from the Kingdom of Thailand could see these majestic animals up close and help support the park’s efforts.

The elephant has been a national symbol of Thailand for over 800 years and is an icon at the very heart of the history and culture of its people. Elephant populations have experienced significant declines over the past century. It can be argued that a well-run elephant camp like Maetaeng Elephant Park provides a safe and caring environment for elephants and supports the mahouts and their families, who take care of the animals. Elephant Art Online is also raising awareness of the importance of animal welfare and the preservation and protection of animals ?? especially the elephant.