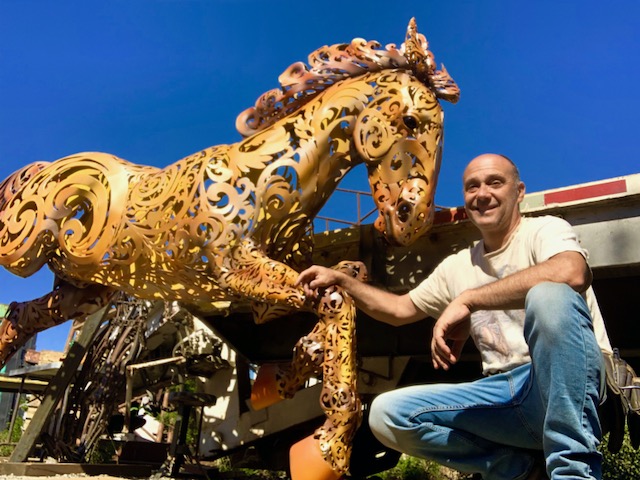 Each year, tens of thousands of people from around the world gather in Nevada’s Black Rock Desert for Burning Man, an experimental festival focused on art, self-expression and community.

The week-long event allows participants to arrive with their own shelter, food and water, and supplies to make their own artistic creations. It culminates in the burning of a massive human-shaped effigy.

This year marks the first time Burning Man has been held since 2019, and among the many sculptures scattered across the desolate landscape is one created by Watsonville metal sculpture artist Pierre Rich.

Dubbed “Golden Opportunities,” the 10-foot-tall piece, made of cut metal sheets, depicts a prancing palomino horse. Once installed at Burning Man, he will be one of 10 horses that will make up “Wild Horses of the American West”, an exhibit aimed at raising awareness among wild horse populations.

According to the coalition, the overpopulation of feral horses in the West has led to environmental impacts, road deaths and horses due to drying up of water resources.

“I love sculpting horses because they are beautiful, powerful creatures, but also have an incredible historical connection to humans,” Rich said. “There are not enough resources to help the wild horses right now… They are undervalued and overcrowded. We hope this project will make a statement about what is happening.

Rich said he was able to create the piece thanks to a grant from the Coalition for Healthy Nevada Lands. A friend told her about the grant just two days before the deadline, giving her just enough time to make a proposal.

“It’s not a huge grant, but it’s enough to get me some materials and inspire me to put in the time,” he said. “I had also just sold another great sculpture, so I had enough resources and funds to continue.”

“Golden Opportunities” took Rich three months. He worked there almost every day, preparing a jig, creating a rough drawing and manipulating sheets of laser/plasma cut steel plate around the frame.

Rich, who attended and participated in Burning Man on and off between 2006 and 2010, said the event provides opportunities for artists who otherwise might not have space to display their work.

“[Burning Man] is special in terms of being able to show large-scale pieces,” he said. “There are amazing works there that you won’t see anywhere else. The high caliber to showcase metal sculptures in particular is truly amazing.

Rich also highlighted the unique cooperative community at the festival.

“People from all walks of life, of different financial statuses, come to Burning Man,” he said. “It’s a real melting pot. It’s all about exploration.

“Wild Horses of the American West” will include horse sculptures by 10 other artists and eight other artists who have volunteered to build artwork to accompany the group. After Burning Man, which runs from August 28 to September 28. 5, some of the sculptures will be transported and exhibited at the Reno/Tahoe International Art Fair in mid-September.

After that, Rich said, the plan is to place some of the pieces, including “Golden Possibilities” in the Reno area for six months. During this time, the coins will go on sale.

Rich said he hopes the exhibit will draw attention to the current challenges of wild horses in the West, while being a source of inspiration for artists and art lovers.

“[The sculptures] should inspire admiration,” he said, “not only for their artistry, but also for the connection of humans to horses, our coexistence.

trends and outlook in an exclusive interview with Eng. Khwlah Ibrahim Al-Sultan