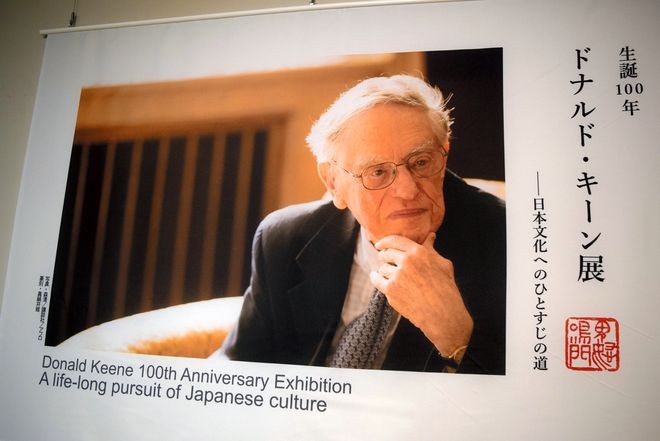 VOX POPULI: In memory of the famous scholar of Japanese literature Donald Keene

So different from the English alphabet, the ideograms captivate him.

Keene became fond of kanji made up of many strokes. He was elated when he managed to write “eichi” (wisdom) and “yuutsu” (melancholy), each written with two multi-stroke characters.

I visited the Kanagawa Museum of Modern Literature where “Donald Keene’s 100th Anniversary Exhibition: A Lifelong Pursuit of Japanese Culture” is being held until July 24.

The exhibits included a “meishi” business card used by Keene as a US military officer sent to Qingdao, China. On the card was his surname in “ateji” – kanji used to phonetically represent Keene.

When living in Japan, he often signed his name in various Ateji versions of his surname.

The museum also showed a photo of him holding a gun in his right hand and holding a Japanese-English dictionary under his left arm.

During World War II, Keene landed on one of the Aleutian Islands and was shocked to see a Japanese soldier commit suicide by slamming a hand grenade into his chest.

But from the letters and diaries of Japanese soldiers he read, he was also deeply impressed by the refined dignity with which they wrote their death poems and farewell notes.

Looking at various exhibits, I remembered the one and only time I attended Professor Keene’s lecture at Columbia University in the United States.

Speaking in both Japanese and English, he explained archaic contemporary Japanese literary expressions, including “adashi gokoro” (temptation to gamble) and “hiyoku renri” (marital vow of eternal love and fidelity).

I was fascinated throughout the two-hour lecture, which was given in March 2011, right after the Great East Japan Earthquake.

Keene expressed deep concern for the affected areas, noting that the Tohoku region holds a special place in his heart because when he was younger he retraced the journey that Basho recounted in his “Oku no Hosomichi” ( The narrow roads to the Far North).

He also expressed his desire to live permanently in Japan after his retirement. And he got his wish by acquiring Japanese nationality and living his last years in Tokyo.

June 18 marks the 100th anniversary of his birth. I again contemplate the serendipity of this extraordinarily talented man encountering kanji for “wisdom” and “melancholy.”

Vox Populi, Vox Dei is a popular daily column that covers a wide range of topics, including culture, the arts, and social trends and developments. Written by veteran writers from Asahi Shimbun, the column offers helpful perspectives and insights into contemporary Japan and its culture.

Interior: how to get the “best possible surface” for painting – creates a “flawless finish”