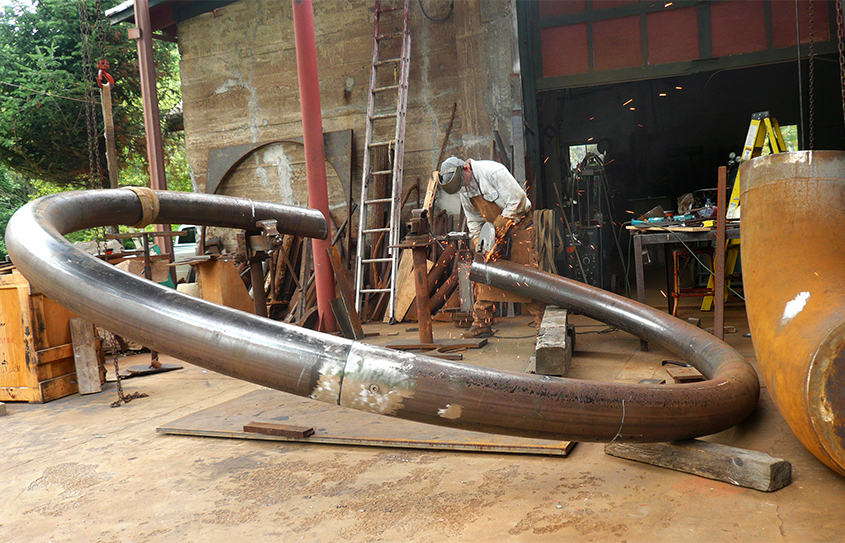 The steel and stone sculptures on display at the Hyde Collection mark around five decades of work for Johnstown-born artist John Van Alstine.

Exhibited in two of the museum’s largest galleries, his sculptures juxtapose natural and man-made materials, balancing the two in a way that seems to defy gravity. Although his work is classified as abstract, there is a narrative theme running through it, inspired by Greek and Roman mythology.

“I use mythology a lot in my work. I see it as a kind of scaffolding on which to hang your ideas,” Van Alstine said. “Many artists from all kinds of disciplines use mythology because we all have that kind of touchstone.”

This is most evident in his Sisyphean Circle series, which likens the continual struggle of the mythological figure Sisyphus to that of the creative process. In one piece from the series shown at the Hyde, a piece of granite protrudes from the opening in a U-shaped piece of steel.

“I see it as a self-portrait, not the punishment, but the process. I always push the stone, literally making it go up in the air, but in a figurative way, [I’m] pushing to a creative peak,” Van Alstine said.

As soon as he reaches the proverbial peak and completes one piece, he starts from scratch on another.

His creative career began in college at St. Lawrence University where he was drafted for the ski team. There, a teacher suggested she take a sculpture course, which covered everything from welding to stone carving and mold making.

“It was a turning point in my whole life. I signed up for it and never looked back,” Van Alstine said.

He and Caroline Ramersdorfer, his wife, and a fellow artist have their studios on the property, which spans nine acres and includes six buildings as well as a sculpture garden. (They’ll be hosting open studio hours this weekend as part of the Sacandaga Valley Arts Network’s Art Trails event. See below for details).

Over the years, Van Alstine’s work has been exhibited at major salons across the country and he has also had works exhibited in China. His works are in the permanent collections of the Carnegie Museum of Art, the Hirshhorn Museum and Sculpture Garden, and the Smithsonian’s National Museum of American Art, among others.

The exhibition at the Hyde, titled “Transformations: The Art of John Van Alstine,” curated by Caroline M. Welch, gives viewers a glimpse into each period of his career, which spans almost 50 years.

It is inspired by a book on Van Alstine’s work published at the end of 2019. It was originally planned at Hyde for 2020 but was postponed due to the pandemic.

“This is the first job with a lot of [other] periods, like when I was carving stone. Now I use stone as a found object where I find it, choose the right pieces and combine it with found steel and so my work is really about amalgamating or marrying the natural environment with the man-made environment and [that] tension, conflict and collaboration,” Van Alstine said.

The exhibition also provides insight into the artist’s process, with concept drawings displayed near the accompanying completed sculpture.

Van Alstine is always on the lookout for stones and metals to use, and it’s not uncommon for him to find parts while driving his truck.

“If I find something I like, I can pick it up, or if I have the crane, I’ll throw it on my back and bring it home,” Van Alstine said. “Then I start putting [them] together. They end up on the studio floor and [I] start looking visually at dynamic relationships. What works? How can I attach it? What will hold?”

Then it’s a matter of pinning and welding these elements together.

“At one point I put nylon straps around it. Raise it with gantries and lifts that we have here. hoist it up in the air, so you can walk around it, do some more soldering, and figure out how it’s going to stand up. When you think it’s done, you take the straps off, step back and hopefully it comes up,” Van Alstine said.

Seeing “Transformations,” which was installed at the Hyde earlier this summer, was an eerie experience at first.

“It’s a little weird, actually. It’s 50 years of work. So I’m like, Wow, is this the peak of my career? said Alstin.
At the same time, it was rewarding.

“Most people were really amazed by the work,” Alstine said.

“A lot of my work is about choreography, in a sense. I get heavy pieces of metal, and rock in the air and choreographed. For the dancers to respond to this with their particular costumes. . . was just fantastic,” Van Alstine said.

“Transformations” will be on view at the Hyde until September 18. For more information, visit hydecollection.org.

Van Alstine and Ramersdorfer’s studios and sculpture garden will be open from 10 a.m. to 4 p.m. Saturday and Sunday as part of the SVAN Art Trails. The self-guided tour features artists’ studios around the Sacandaga Valley. For more information, visit svanarts.org/art-trails.

More from The Daily Gazette: