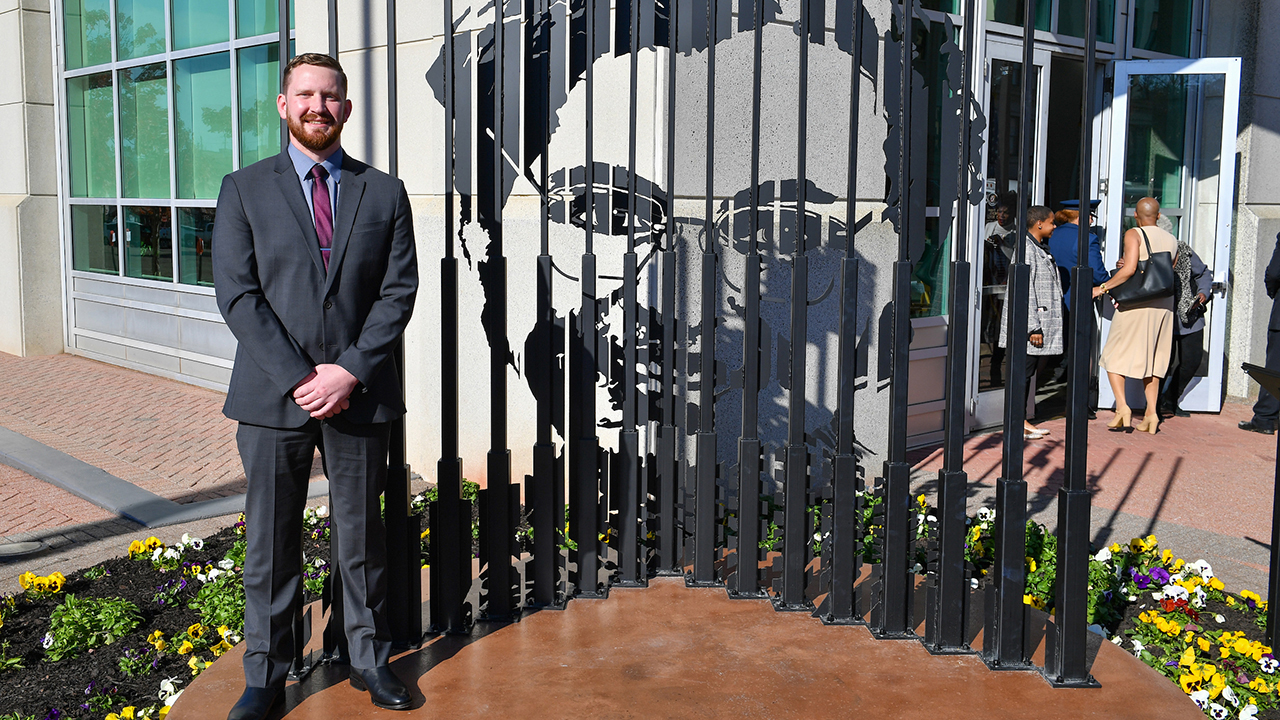 Visitors to the Rosa Parks Museum at the University of Troy will now be greeted with a new sculpture of the â€œMother of the Civil Rights Movementâ€ by Ian Mangum.

â€œWhen I was first approached for the project, I looked at what had already been done for Rosa Parks. I wanted to do something really unique and different, â€Mangum said. â€œIt was also very important to me that we could see her face. People in Montgomery and Alabama know who she is, but the more I talked to people outside of Alabama, I learned that people didn’t know. not really what she looked like.

The sculpture is the second created by Mangum, the first having been unveiled last year at Maxwell Air Force Base, near where Ms Parks and her husband, Raymond, once worked.

Colonel Mentzer said she was honored to be included in the ceremony, which took place at the entrance to the museum at the site of Ms Parks’ arrest on December 1, 1955.

“It is the honor of my career to be here today because without Mrs. Rosa Parks, without Mr. Fred Gray, if not for all those infantrymen who paved the way for a more inclusive America, I wouldn’t want to to be here today and I am truly grateful, â€she said.

The Chancellor of the University of Troy, Dr Jack Hawkins, Jr., thanked Mangum for sharing his talent and works of art with the museum, which opened on December 1, 2000.

â€œWe look forward to thousands and thousands of visitors having the opportunity to enjoy the work as they approach and leave this very special place,â€ said Dr Hawkins. â€œI am delighted that five states have designated a day in memory of Ms. Rosa Parks, but we have five and 45 more left. I think over time this will happen. It must be a nationally recognized day to recognize all that has happened here in this special place. “

Dr Hawkins said visitors from around the world visited the museum to learn about the history of Ms Parks and the infantrymen of the Montgomery bus boycott.

â€œSince we opened this museum, over a million people from over 100 countries have participated in this experiment,â€ said Dr Hawkins. â€œOver 100 members of Congress from the United States have come here. All the icons of the civil rights movement have passed through this very special place. It was especially special for our late friend, the “Boy from Troy” as proclaimed by Martin Luther King, Jr., John Robert Lewis. It’s a special place that he took 12 delegations of men and women from Congress through so they could understand the meaning of history and what happened here.

Montgomery Mayor Steven Reed reminded those in attendance that the impact of the Montgomery bus boycott continues to provide important lessons for today.

â€œThe bus boycott demonstrated the potential of a non-violent mass protest to successfully fight racial segregation and serve as an example for other campaigns that followed,â€ Reed said.

Marking 66 years since Ms Parks’ arrest, Gray said the impact of the Montgomery bus boycott had been felt around the world.

â€œThinking back over those 66 years, there is no doubt in my mind that the events that occurred in Montgomery during this period, with divine intervention and with the help of some 40,000 African-Americans who remained away from the buses, have not only changed the city of Montgomery, the state of Alabama and these United States, but also changed the world, â€said Gray.

Gray encouraged the young audience to continue to explore ways to make a difference in the world and to take the necessary action to lead change within their communities.

Closing the ceremony, Shelia Jackson performed songs that were among Ms. Parks’ favorites, and The Westerlies, an award-winning New York-based brass quartet, performed the song “For Rosa”, composed by Mason Bynes.

The unveiling ceremony was one of many events held in Montgomery on Wednesday to celebrate Rosa Parks Day.

The Westerlies performed a free Rosa Parks Day concert on Wednesday afternoon in the auditorium of the Rosa Parks Museum, and the museum hosted the â€œPreserving Their Legacy: Activism Past and Presentâ€ program, featuring keynote speaker Karen Gray Houston, an award-winning broadcast journalist whose career spanned more than 40 years. Houston, the daughter of Judge Thomas W. Gray, a founding member of the Montgomery Improvement Association, and the niece of civil rights lawyer Fred Gray, is the author of “Daughter of the Boycott: Carrying on a Montgomery Family’s Civil Rights Legacy “. The program also included performances by members of Women In Training, Inc., a youth empowerment organization founded by sisters Breanna and Brooke Bennett to advocate for menstrual equity and education and to engage in community service and social justice.