“I design each home to satisfy the living needs of the proposed occupants for as long a period as possible.” Edgar Merton Gurney, architect of AV Jennings, 1933-1954

Readers will know my fascination with house projects. I have designed quite a few, for several manufacturers, and I am relaunching my own business. I’ve written about the roots of project houses, the seminal work of AV Jennings, the changes that brick veneer brought, and how it evolved into today’s project houses.

But it was my praise of Bert Jennings’ first architect, Ed Gurney, that raised some eyebrows.

Basically, I said that Ed Gurney single-handedly designed the basis for the project houses. And I said he designed more houses than any other architect in the history of Australia.

Let me go further. I think he was our most prolific architect, with a dozen estates planned, over 10,000 individual homes, shops and community facilities, not to mention a munitions factory, military camps and hospitals during the Second World War. But was the work good?

Oh, definitely yes. Let me show you through some pictures.

But before we do, here’s a quick rundown of who we’re talking about.

Ed Gurney was born in 1911, and after World War I his family fell on hard times and he left school to work in the architectural office of James Wood and Harry Burt. He left them to work with a steel fabricator, KM Steel, which greatly improved his construction knowledge. He was only 21 when he was approached by Bert Jennings to work as AV Jennings’ in-house (and sole) architect.

At the same time, he studied part-time at Hardworking Men’s College (now RMIT) to obtain architectural qualifications. Working with Jennings, Gurney set about designing an ever-expanding range of homes, while also creating the basic models for the mass-produced homes that still endure today. And he devised ways in which each plan could be “customized” to a client’s wishes, without losing the main ideas and arrangements of the plan.

Highly creative and interested in new designs, his work for 22 years was crucial to Jennings’ success.

Gurney designed around ten houses for Jennings before Bert purchased his first housing estate in Caulfield South in 1933. Called Crete it only had twelve blocks. Each house had roughly the same layout (but no plan) and a different facade. The houses were around 110 square meters (or 12 ‘squares’) and together with the land sold for around £195.

Here are the twelve houses, with their different styles, low fences and gardens. Not bad for a 22-year-old working just after the Great Depression. The street, now a “heritage overlay”, has a lovely feel. 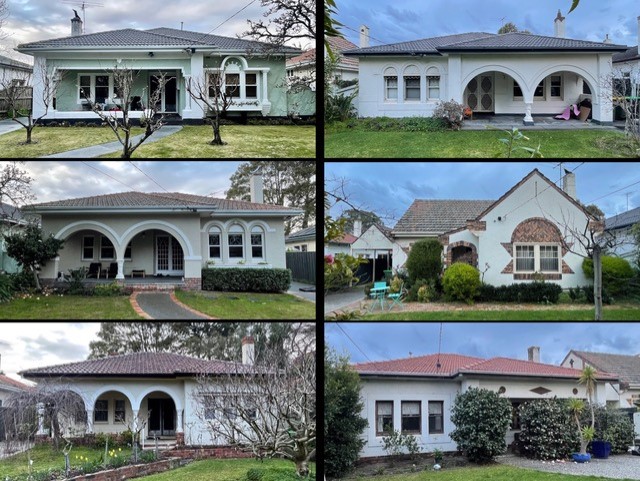 The success of Crete led to more domains, often with a “Beauty” prefix: Beauville in Murrumbeena near Crete, Beaumont in Heidelberg (94 houses), and Beauview in Ivanhoe (121 houses). In each, Ed Gurney designed the master plan, size and layout of the site. Beaumont introduced the first “cul-de-sacs” with small-scale driveways, no fences, and a communal atmosphere.

In houses, he broadens his repertoire of plans, as well as the forms and styles that accompany them. He lived from his work, building a house for his family in each estate. Here is a range of typical houses. 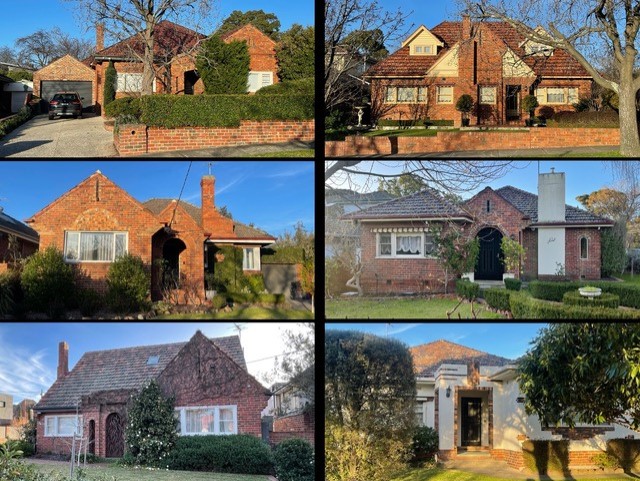 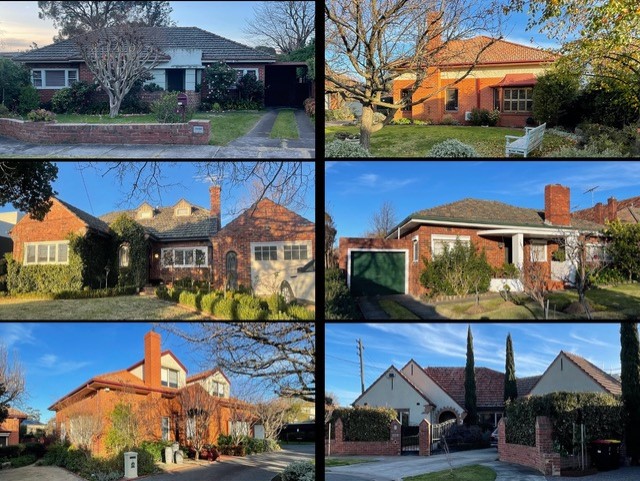 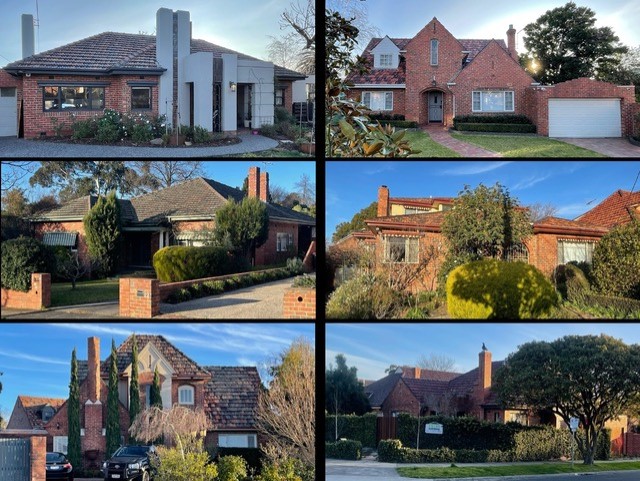 Ed Gurney also experimented with modern planning and forms, sadly referred to as “Modern” by Art Deco enthusiasts. He was among our first architects to use the modernist palette: open plans, integrated kitchens, cubic forms, extended interior volumes, honesty of materials, steel windows (sometimes at angles), not to mention curved spaces and flat roofs.

Here is a nice example on the corner when you enter Beaumont; a duplex that served as the family home of Bert Jennings on the left and AV Jennings Construction Co. on the right. 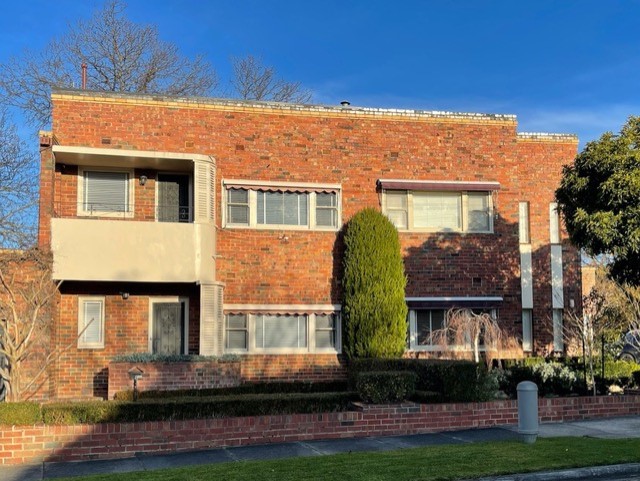 Ed Gurney’s homes were generally experiments in modernism (except at Beauview) and here’s an earlier image, with a photo of the house today (with its unconvincing extension). 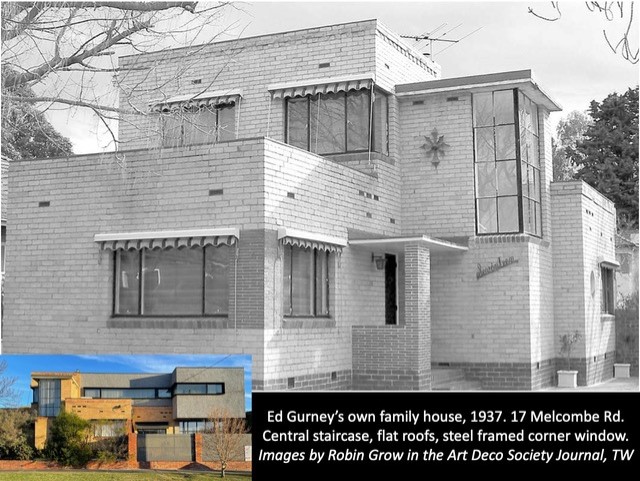 And finally, here are some of Ed Gurney’s modern homes, in the AV Jennings estates, and all pre-WWII. 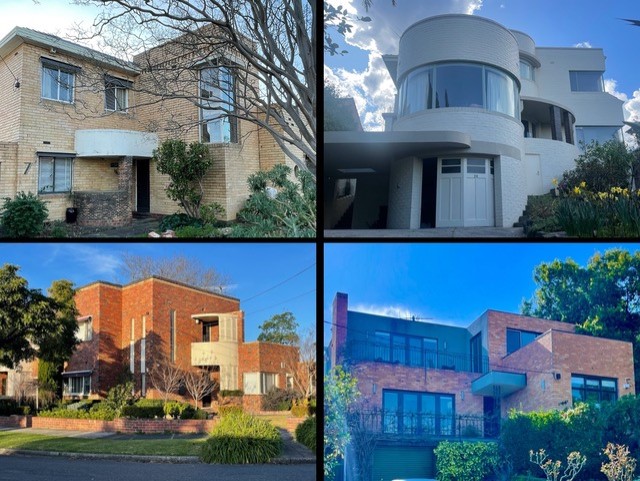 His even more extensive post-World War II work will have to wait another day.