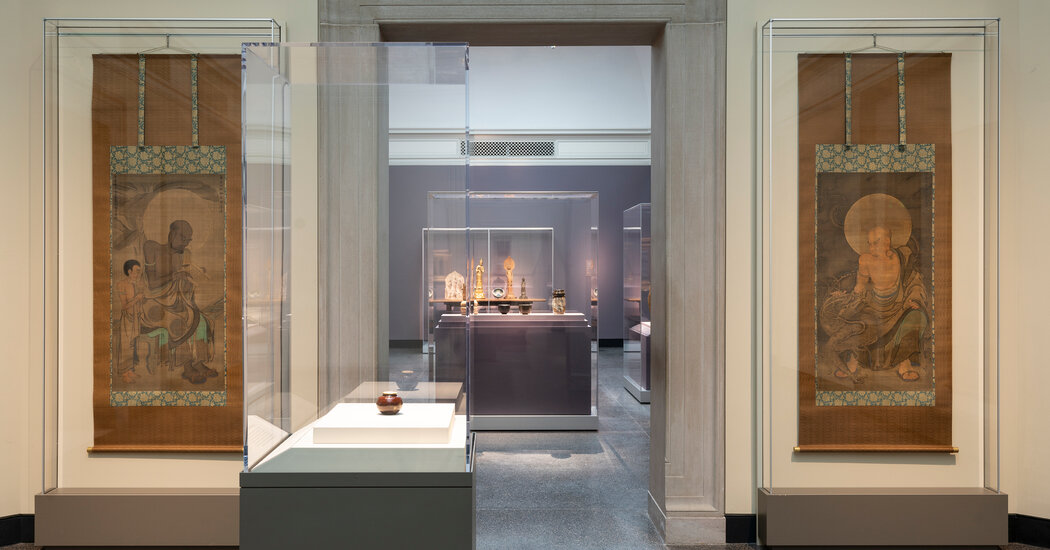 WASHINGTON — When the country is in a frenzy, when stress levels skyrocket, a little nothingness goes a long way.

“Mind Over Matter: Zen in Medieval Japan”, at the Freer Gallery of Art (a branch of the Smithsonian’s National Museum of Asian Art), is a show of ravishing absence: an austere and magnificent exhibition where form is immersed in silence. , and the ego dissolves into empty space. Large and majestic screens support almost impetuously barren landscapes. Kanji tumbles from calligraphy scrolls. Cracked teacups become portals to a world of impermanence.

It offers a nice introduction to Japanese painting (and some Chinese painting) from the 14th to 17th centuries, but there are other reasons why it might be worth a visit. Truly, this is the show for anyone in 2022 who wants the anxious, gasping outside world to be fair. Shut up.

Zen is the purest and most austere tradition of Mahayana Buddhism, and “Mind Over Matter” brings out more than 50 objects from Freer’s rich collection of Zen art, one of the largest outside of Japan. While the exhibit contains bowls, vases, lacquerware and woodblock books, the bulk is black ink painting, done by medieval monks working in Zen monasteries. The lines are calligraphic, impressionistic. The compositions feel free, sometimes even dotted. Up to 90% of a painting can remain intact – in Unkoku Tōeki’s breathtaking early 17th-century screen, the river, sky and mountainside are just expanses of emptiness.

But for the abbots and disciples who first contemplated these paintings, or for the artists who revered them centuries later, their rarity and spontaneity had a religious impulse as much as an aesthetic one. These were works that could immerse you in the world by distancing you from it, and make the self and the universe identical. Now, these monochromatic paintings may look simple, but their vanishing traces of black ink have the depth of philosophy, especially on the four- and six-panel displays shown here in a dimly lit gallery that even makes the football pitches feel. minimalists from Dia Beacon. padded.

Zen Buddhism originated in China – where the school is known as Chan – in the late 5th century AD and flourished during the Tang and Song dynasties. It was, from the outset, a more eccentric and spartan approach to Buddhism than the traditions of Indian origin that preceded it. Patriarch Zen/Chan Huineng (AD 638-713), an illiterate whose innate discernment of Buddha-nature would make him the school’s most influential teacher, argued that enlightenment was coming. as a “sudden awakening”, as opposed to the gradual realization by which earlier Buddhists attached importance to it. The main route to this sudden enlightenment was “thoughtlessness”: an emptying of the mind, achieved through meditation (Zen, in Japanese), until one reached the highest state of consciousness. high, known as satori.

Japanese monks traveling to China had contact with the Chan masters, but Zen did not really establish itself in Japan until around 1200. You can see the new religious tone in four paintings (of a set of 16) from arhats, or disciples of the historic Buddha, made by 14th-century artist Ryozen in the workshop of a Kyoto monastery.

Working from Chinese models, Ryozen painted the arhat Bhadra with his mouth open, his extra-long eyelashes drooping like palm fronds. Arhat Luohan also sits speechless, a three-eyed demon by his side; the arhat Nagasena is half-naked, his robe tilting over his emaciated and hungry body. The silhouettes are bald, knotty, twisted with age; they don’t look friendly; their severity and quirkiness set them apart from the serene bodhisattvas you may know. But as disciples who, through their own efforts, attained enlightenment and escaped the world of suffering, the arhats were the earliest examples of Zen practice.

These days, Zen has become a Western shorthand for peace and quiet, too reducible to a lifestyle hack. (Certainly today, in its meditation-app version: now Satori is referring to a laser hair removal clinic, and instead of contemplation at the tea ceremony, we have selfies at Cha Cha Matcha.) But the zen is much more than balance. Zen is also surprise, revolt and aberration. The masters incessantly beat their pupils with wooden sticks, or shouted and laughed in the wind, when they were not posing riddles (koan) that could never be understood. Maverick monks like Ikkyu Sojun, whose brash calligraphy broke with monastic celibacy and affirmed that sex was a valid step towards satori.

Zen celebrated antisocial figures, like the rustic Chinese poet Hanshan – known as Kanzan in Japanese or Cold Mountain in English – whose unadorned verses were, according to legend, scrawled on tree trunks and rocks. Hanshan was a favorite subject of Zen painters, and it appears here in a 14th-century scroll by an artist called Kao. Her hair is a rat’s nest and her tattered coat has been rendered with a simple calligraphic curl. (Hanshan would later be a muse for 20th century American artists; Jack Kerouac dedicated “The Dharma Bums” to him, and Brice Marden’s “Cold Mountain” series drew inspiration from Zen traditions to reconcile painting and poetry.) the same pleasure in insufficiency or inconclusiveness that Hanshan brought to his verses:

My heart is like the autumn moon
Shining clean and clear in the green pool.
No, that’s not a good comparison.
Tell me how should I explain.

Not everything was renunciation. In a sublime pair of late 16th-century black-ink screens, Japanese gentlemen take their leisure Chinese-style, practicing painting and calligraphy, playing music and on their way. Even in reconstructing broken ceramics, through the art of visible repair known as kintsugi, there was room for luxury: a tea set was re-soldered with gold fillets.

But you can’t take it with you, and in Zen landscapes the world at hand always appears evanescent, abbreviated. Stunted trees, rendered with a few strokes of black. Jagged mountains, erased in the mist. For all their beauty, these idealized and rationalized Zen paintings are best understood as the efforts of individual monks to express and stimulate the non-thought that would even reveal the painting as another part of this cycle of life and death. They offer no lesson, or rather they offer the primordial lesson of Zen: the lesson of nothingness.

This philosophical reluctance may make these paintings an even more welcome disturbance than their visual sparseness. Art today is a parade of the self, a cavalcade of stories, an endless transmission of messages. It’s all vanity. There is a ninth-century story about three Buddhist monks crossing a bridge in rural China and meeting a disciple of Zen master Rinzai. One of the monks gestures towards the water flowing beneath them. He asks, in a great metaphor, “How deep is the Zen River?” And the disciple, stepping forward to push the other monk into the water, said: “Find out for yourself.