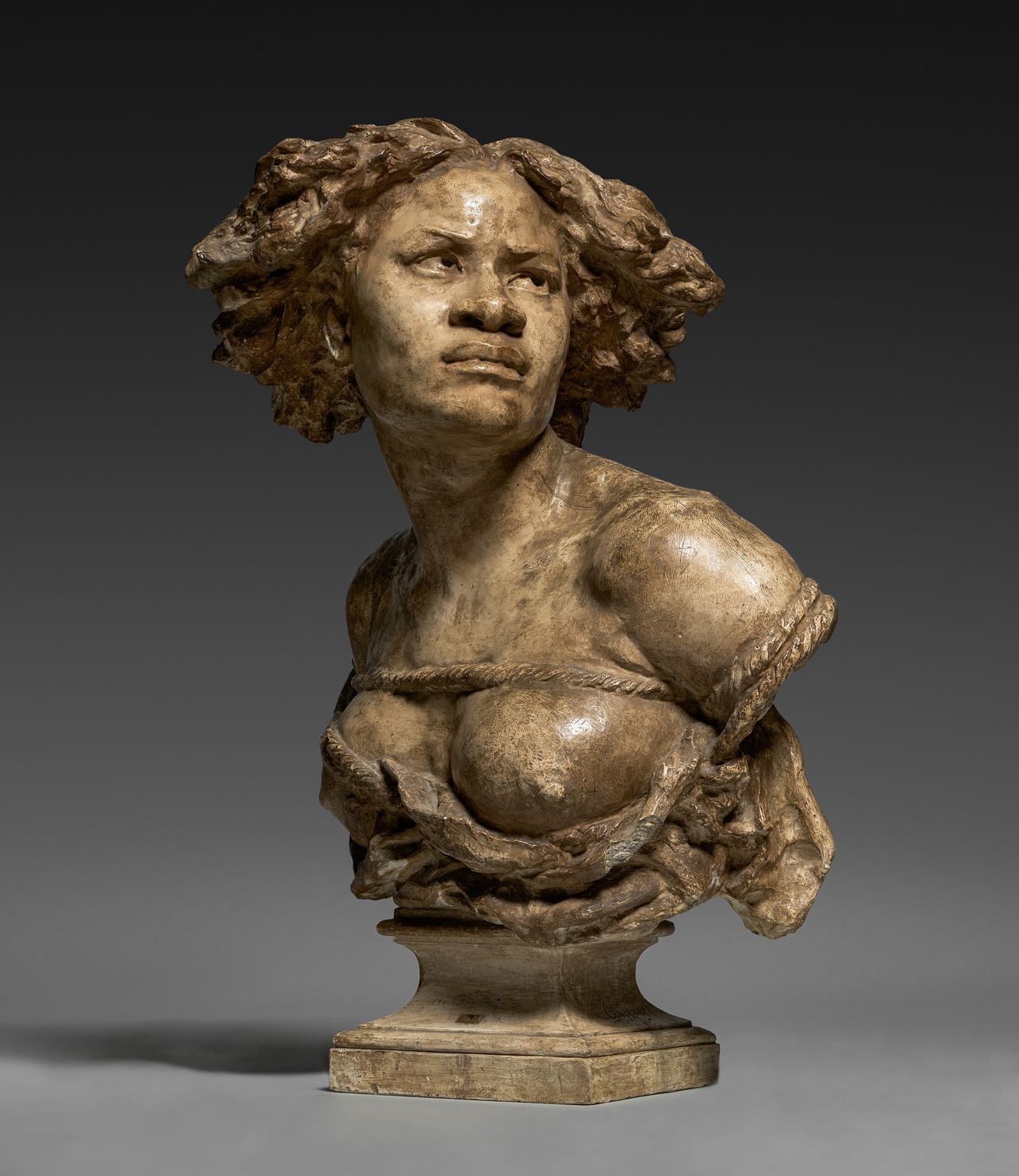 CLEVELAND, Ohio – The Cleveland Museum of Art sees its new acquisition of a major 19th-century French sculpture expressing abolitionist outrage against slavery as a launching pad for wide-ranging discussions about the role of politics, race and power in the history of art – and in the history of his own collection.

The plaster sculpture, titled “Why Born Enslaved!” created by artist Jean-Baptiste Carpeaux in 1868, is a bust portrait of an anonymous enslaved black woman, tightly bound with ropes, with her dress torn, revealing her left breast.

The museum has a handful of works that deal with slavery throughout history, and in particular black slavery in the ancient Mediterranean and European colonization of the New World, but none have the potential to play such a central role in the museum’s collection and programs as the Carpeaux.

“It’s one of the greatest works of art we’ve acquired in a very long time and it speaks to so many of the issues we face today,” said William Griswold, museum director, discussing the first time purchase with cleveland.com and The Plain Dealer. “It’s a fantastic addition to the collection and to Cleveland.”

The Carpeaux acquisition comes as cultural institutions across the United States reevaluate racial equity practices in the wake of the 2020 police killing of George Floyd in Minneapolis and the nationwide wave of Black Lives Matter protests that followed.

The Cleveland Museum, which serves a city that is approximately 50% black and surrounded by low-income and predominantly black neighborhoods, adopted its first diversity, equity and inclusion plan in 2018 and, over the past decade , has intensified the frequency and scale of exhibitions and purchases of works by African-American artists.

The curators who recommended the Carpeaux purchase said they saw it as a focal point for discussions of everything from the transatlantic slave trade to the role of racial politics in shaping the museum’s own collection, including figured out how and when he decided to buy works of art depicting black and brown people.

“It’s important that we have a historiography of our own consciousness and our own transformations,” said Key Jo Lee, associate curator of American art at the museum. “We continue to think about how we talk about our historical collections, their relevance to today’s issues, and to create a courageous space for these conversations.”

The Carpeaux sculpture depicts the artist’s sitter in a twisted pose, chest and shoulders twisting to the right while the head turns sharply to the left, facing an unseen oppressor with anger and defiance.

“It’s breathtaking,” said William Robinson, the museum’s senior curator of modern art. “As you walk it reveals a series of very aggressive dynamic shapes [that are] almost explosive. And the expression on his face is extraordinary.

The work is scheduled to go on display in late May or early June in the large gallery devoted to early 19th-century painting and sculpture, just north of the central rotunda of the museum’s 1916 building. There it will share space with works from the Napoleonic and post-Napoleonic eras in France.

The exhibition will coincide, coincidentally, with a new year-long exhibition at the Metropolitan Museum of Art in New York of a later version of “Why Born Enslaved!” de Carpeaux, carved in marble in 1873.

The Met purchased the work in 2019 and displayed it a year later in a sculpture yard alongside other works by European sculptors. The museum then decided to remove it and organize around it an exhibition of three dozen works.

Titled “Fictions of Emancipation: Carpeaux Recast,” the Met exhibit aims to provide broad historical context for a work that some contemporary viewers might find offensive or controversial because it depicts violence against a semi-nude black woman.

“After acquiring this sculpture, we assumed responsibility for the ethical exhibit of ‘Why Born Enslaved!’ “by Carpeaux,” curator Sarah Lawrence wrote in the exhibition catalog.

At the Cleveland Museum, curators want to exhibit the Carpeaux as soon as possible so conversations about it can begin quickly. Robinson and Lee said the museum’s interpretation of the work will evolve based on people’s reaction.

“It’s important for people to see it,” Robinson said. “It will help us think about it and it will help the public connect with it, and connect it to other works in our collection.”

A leader of his time

Carpeaux, (1827-75), is considered one of the greatest sculptors of his time, and the most important French sculptor of the 19th century before Auguste Rodin, famous for his seated “Thinker”, a version of which is installed on a place outside the south entrance of the museum.

Born into a family of stonemasons in northern France, Carpeaux excelled as a young artist and gradually worked his way to admission to the prestigious Ecole des Beaux-Arts in Paris, the first funded art academy. by the government. There he won the Prix de Rome, the Prix de Rome, in 1854, the School’s highest distinction. He was perhaps best known in Paris for sculpting a group of dancers for the facade of the Paris Opera in 1865-1869.

“Why born a slave!” has traditionally been interpreted as an expression of Carpeaux’s sympathy for the abolitionist cause, although France outlawed slavery in its colonies in 1848 and the U.S. Congress abolished slavery with the 13th Amendment to the Constitution in 1865 .

Scholars have also noted that despite his anti-slavery sentiments, Carpeaux produced many versions of his sculpture, turning it into a money marker to help sustain the operation of his large studio and numerous employees.

The work also added to European art traditions of equating slavery with black racial identity, showing people defeated by conquering powers and portraying black women as exotic and erotically desirable. Scholars also do not know the identity of Carpeaux’s model and the circumstances under which she posed for him.

Lee said the museum will use the sculpture to examine these issues in future programs and events, and the labels and text panels displayed with the work will also evolve as the museum gauges public reaction.

“What does it mean for a living model to become the embodiment of slavery?” she said. “How do we live today with this easy equivalence between darkness and slavery?”

Robinson said he was particularly excited about the museum’s acquisition of his plaster version of the Carpeaux, as he believes it to be the “primary model” the artist used to make later versions, including the marble one acquired by the Met in New York.

The Cleveland version features a rich surface covered in marks that indicate the artist’s touch and working methods, including pencil marks and subtle linear incisions.

“You have this amazing surface that doesn’t exist on any of the others,” Robinson said of the Cleveland version. “You see all the scratching and working on the surface, even the pencil marks. This one has such life.”

Robinson said it is likely that the Carpeaux used Cleveland’s plaster version to generate molds which the artist then used to make several bronze casts. Another version, also owned by the Met, is cast in terracotta, a form of clay.

The provenance or history of ownership of the sculpture goes directly back to Carpeaux’s workshop. It was inventoried in his studio upon his death and was kept by his children, Louis Carpeaux and Louise Clément-Carpeaux until they sold it at auction in 1913.

It passed through private collections in France and Switzerland before being acquired at auction in Zurich in 2021 and later purchased by the Cleveland Museum from Stuart Lochhead Sculpture in London in a private purchase. The museum does not disclose prices in its private purchases.

As a depiction of a black person bound and suffering from slavery, the Carpeaux would seem to fit into a category like that of a controversial exhibit of Shaun Leonardo’s drawings of black men and boys killed by police that the Museum of Contemporary Art Cleveland canceled in 2020.

MOCA Cleveland said at the time it wanted to avoid traumatizing victims of police brutality and surviving family members of those killed by police, but Leonardo, who identifies as Afro-Latino, accused the museum to censor it.

Lee said comparing Carpeaux’s drawings to Leonardo’s drawings as potentially traumatic for black viewers is valid, but only up to a point.

The distance in time between Carpeaux’s and Leonardo’s works — which are based on widely circulated videos and photos of police brutality against black people — is significant, she said.

“These are different times,” she said. “It gives us enough distance to hold the conversation and to contain the pain that may exist alongside, which may not necessarily spill over the way these other works have.”