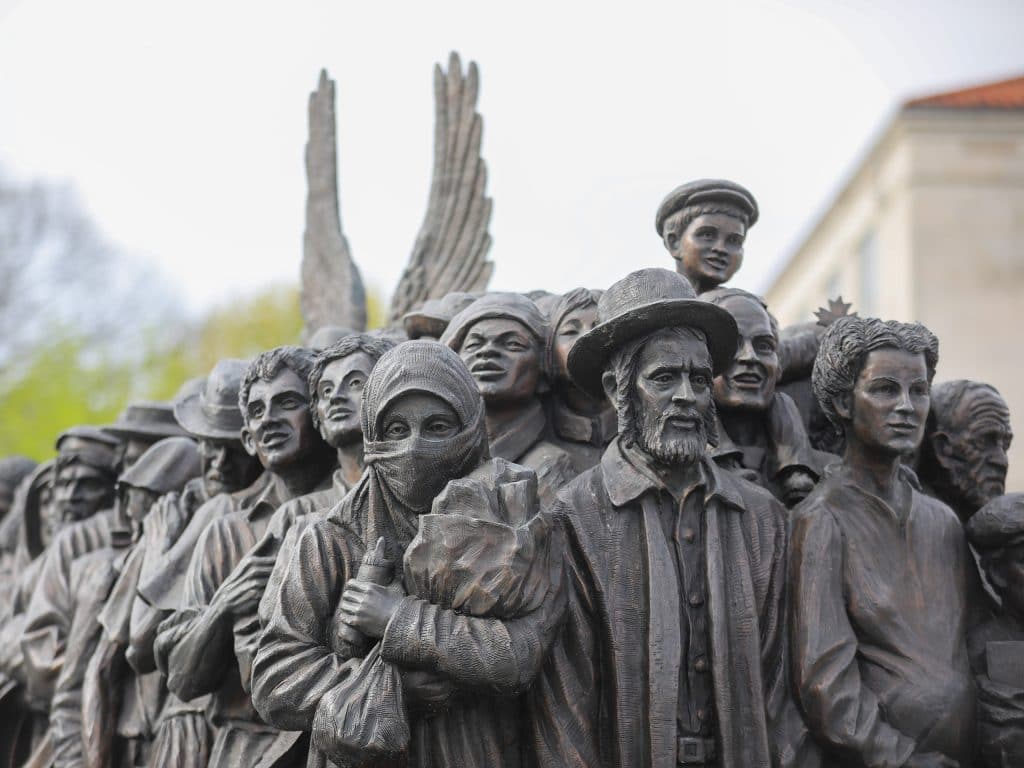 The Catholic University of America unveils the sculpture “Angels Unawares”

WASHINGTON — A monumental work of art depicting migrants and refugees seeking homes has found its own permanent home in a new plaza at the Catholic University of America.

In a blessing and dedication ceremony April 22, Washington Cardinal Wilton D. Gregory blessed Timothy Schmalz’s “Angels Unawares” sculpture and philanthropist and patron of the arts Jacqueline Mars pressed a button that triggered the flow of water around the base of the sculpture to form a reflecting pool.

The sculpture depicts 140 migrants and refugees from different countries and historical eras crammed into a boat as if seeking safe harbor, with the water flowing in the reflecting pool appearing to represent the tides carrying the occupants of the boat to a new life.

“It’s beautiful, isn’t it? said Mars, who donated $1.25 million for the plaza. In a ceremony preceding the blessing, she said, “I believe this statue personifies exactly what we should be doing, welcoming the stranger.”

The co-owner of Mars, the world’s largest confectionery company, said the sculpture reflected how the United States was founded by immigrants, and she also said it was very meaningful to her that the refugees of the work include the Holy Family, shown on their flight to Egypt with Joseph holding carpentry tools and Mary cradling the infant Jesus in her arms.

Noting the location of the sculpture and the plaza, surrounded by the Catholic University campus and with the nearby Basilica of the National Shrine of the Immaculate Conception forming a majestic backdrop, Mars said: “I chose to support Welcome Plaza because I felt that this place was a place where the statue could speak to a variety of people: young and old, from this country and beyond.

“Experiencing ‘Angels Unawares’ in person is an important lesson for all of us,” she said.

The 20-foot-long, 3.5-ton bronze sculpture is the second casting of this work by Schmalz, originally commissioned by the Vatican and placed in St. Peter’s Square, where it was unveiled by Pope Francis in September 2019 for the world. Migrants and Refugees Day.

A year later, the second sculpture was blessed by Archbishop Gregory of Catholic University, before traveling on a 9,700 mile tour across the country.

“Nineteen months later, the sculpture has finally arrived in port, and we have settled the matter of where to moor it,” Catholic University President John Garvey said at the opening ceremony. ‘inauguration.

A stone marker identifies Welcome Plaza and the “Angels Unawares” sculpture and includes the biblical quote from Hebrews 13:2 that inspired the artwork: “Do not neglect to show hospitality to strangers, for some have thus entertained angels without knowing it.”

To reinforce this spiritual message of welcoming newcomers, large angel wings stretch skyward amid the figures standing side by side on the boat.

In his opening prayer for the gathering, Archbishop Christophe Pierre, Vatican Apostolic Nuncio to the United States, noted that these are “dramatic days, when so many of our brothers and sisters are driven from their homes” by war and domestic conflicts.

“Above all, oh Lord, we ask you to send your holy angels to comfort migrants and refugees, the marginalized and the discouraged and those who care for them,” he prayed.

The artist also addressed the guests and said seeing the sculpture gave him a flashback of the faces he used as models for the work. The Canadian artist said some, including African refugees, posed for him in his studio, while many historical figures were based on photos from the Ellis Island archives.

The figures in the sculpture represent a range of ages, ethnic backgrounds and emotions. Most look forward, and some look back.

Figures at the front of the sculpture include a Muslim woman fleeing Syria, a Jewish man holding suitcases while fleeing Nazi Germany, a pregnant woman from Poland and an Irish boy leaving home during the Potato Famine . In the back is the figure of a Cherokee man with his hand clutching his face in pain as he is forced out of his tribe’s lands during the “Trail of Tears”.

“I hope when people watch it, they see themselves in it,” Schmalz said.

The interfaith ceremony also included remarks from an Episcopal priest, a Muslim imam and a Jewish rabbi, all of whom explained how welcoming strangers is a central tenet of their religion.

In an interview, the artist said that the “Angels Unawares” in this setting celebrate the history of immigrants to America. And he noted that with this casting of the sculpture, the figures in the boat can be surrounded by water, which could not be done in St. Peter’s Square.

Mars said she “cares a lot about the water element and that the statue should float like on a boat. When you think of all the immigrants and the images we see of many of them crossing at sea to escape, it just seemed fitting to have that water element in the square as well.

“I really hope that ‘Angels Unawares’ brings people to a generosity of spirit towards immigrants,” she said.

Zimmermann is editor of the Catholic Standard newspaper for the Archdiocese of Washington.

Take a closer look at how car title loans work