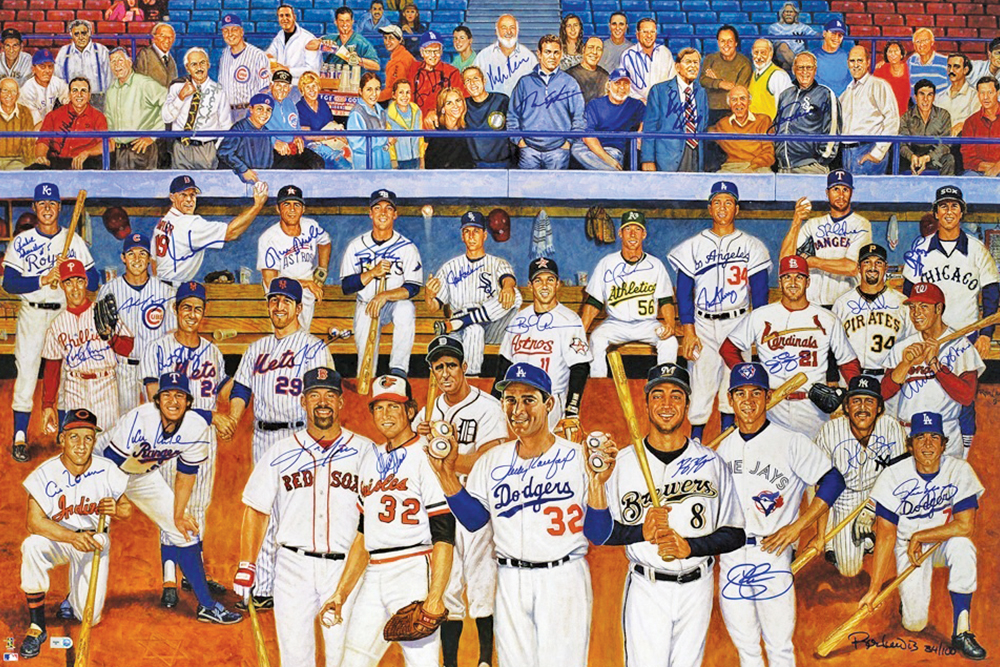 There have been many great Jewish baseball players throughout history, from Hall of Famers Sandy Koufax and Hank Greenberg to former Astros Brad Ausmus and Norm Miller.

On October 3 at 5 p.m., the Houstonians will have the opportunity to place themselves right next to greatness.

One lucky person will win a bespoke painting that features the famous Jewish players, as well as their own likeness painted in the crowd just above Koufax, Greenberg and others.

â€œThis is a great gift for a Bar Mitzvah, a grandchild or to honor someone who has passed away,â€ Rabbi Dan Gordon of Temple Beth Torah told JHV. â€œAnd we hope it can be done in time for Chanukah. “

There is no cost for the Zoom presentation, and raffle tickets can be purchased for the custom painting. All proceeds will go to Temple Beth Torah and its programming in northeast Houston.

A winner will be announced during the presentation, although you don’t need to be virtually present to win.

During the presentation, Harris will tell in-depth, behind-the-scenes stories of how the painting came together, as well as details about the players themselves.

â€œIt’s not just for your baseball fanatic,â€ Harris told JHV. “These are good human interest stories about Jewish baseball players.”

Harris, whose first job was as a peanut salesman at Wrigley Field in Chicago, has always had a passion for baseball. When he came up with the idea of â€‹â€‹getting all the players on the board, the task seemed like an uphill battle.

After working through the proper channels and obtaining the approved licenses and player permissions, Harris commissioned artist Ron Lewis to paint the artwork in 2013.

The 24-by-36-inch painting features 26 current and former Jewish baseball players, as well as nine prominent Jewish figures, including fans like Rob Reiner, Larry King and Billy Crystal. A thousand lithographs were made and personally autographed by most of the players.

Harris has since raised nearly half a million dollars for several charities through the works of art.

For Temple Beth Torah, the opportunity to hear Harris speak was a perfect match for a baseball-loving rabbi.

â€œI hope everyone enjoys learning more about the connection between Judaism, the Jewish people and baseball,â€ said Rabbi Gordon. â€œPeople can look at role models in different ways. We can relate the Jewish concepts of teamwork and sportsmanship to understand the connection. “

Rabbi Gordon has always been a huge baseball fan, often combining his love of the game with Judaism. He interspersed baseball in his sermons, as well as written essays showing the similarities between baseball and Judaism in the book “What’s Jewish About America’s Favorite National Passtime?” published by Rabbi Judy Abrams of Houston, with blessed memory.

Rabbi Gordon grew up in Pittsburgh, a huge fan of Roberto Clemente and the Pirates.

“The first baseball game I attended was Roberto Clemente Night at Three Rivers Stadium on July 24, 1970,” said Rabbi Gordon. “Clemente was a role model for me, not only devoting himself to the game he loved, but also helping people.”

When Rabbi Gordon moved to Houston in 1990, he quickly became an Astros fan. He also liked to follow the careers of Jewish players, past and present.

When Rabbi Gordon heard that Harris had assembled all the Jewish actors for the painting, it was an instant success.

â€œI have always enjoyed bringing together my two loves of baseball and Judaism,â€ said Rabbi Gordon. â€œEveryone knows I’m a huge baseball fan and I think it would be great for our synagogue. “

To join the Zoom and / or purchase a raffle ticket for the custom painting, visit temple-beth-torah.org/just-in-time-for-the-baseball-playoffs/ or send an email [emailÂ protected].