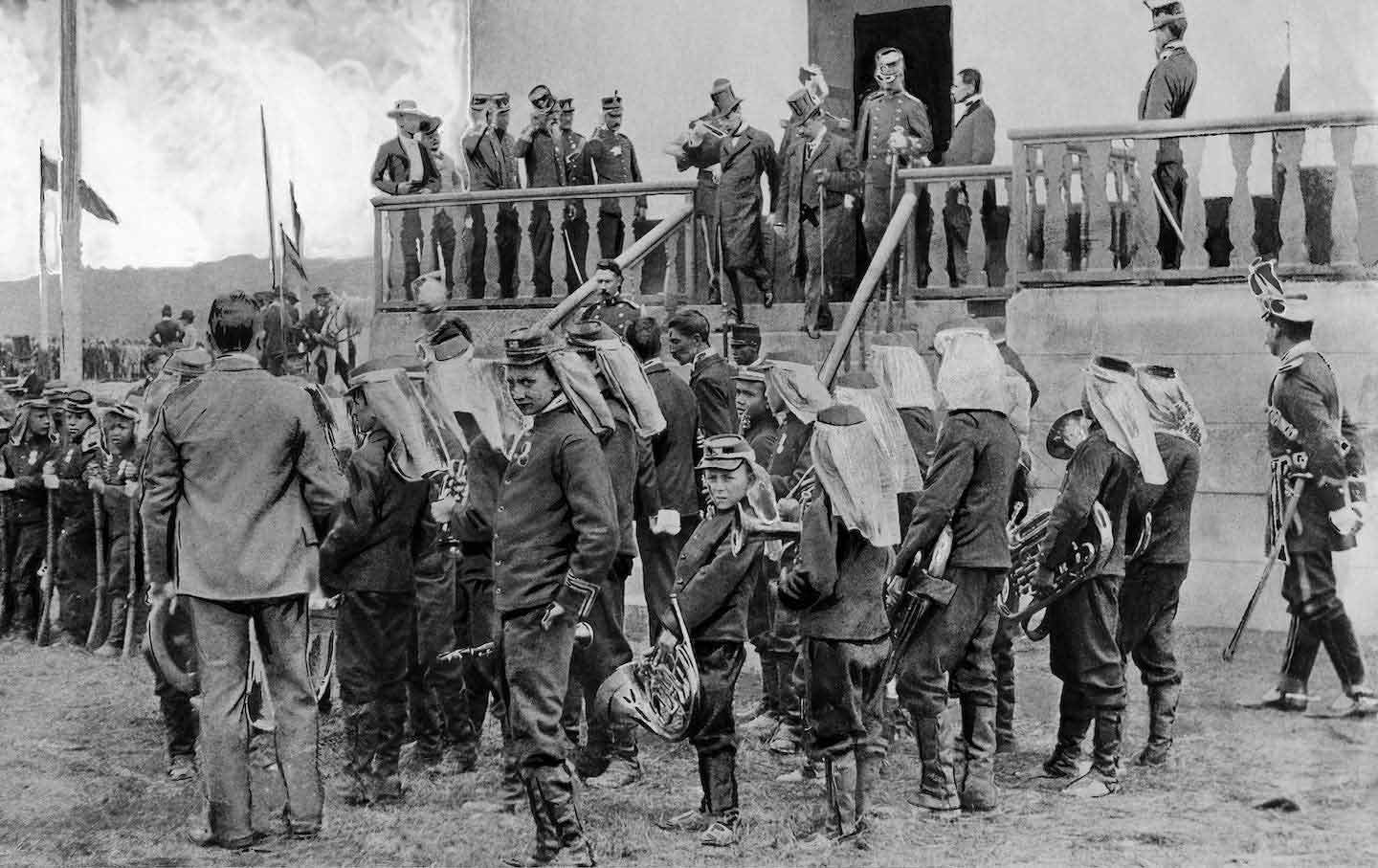 Struggle Between Good and Evil by Miguel Ángel Asturias

Mr. President was born from “Political Beggars”, a short story that Miguel Ángel Asturias wrote in December 1922 before leaving Guatemala for Europe. The novel was first published in 1946 in an edition full of errors which Asturias corrected for the second edition (Buenos Aires: Editorial Losada, 1948). Indeed, he worked longer on this novel than on any other of his published books, even though he had abandoned the manuscript for long periods. The novel bore this annotation: “Paris, November 1923 – December 8, 1932”. According to most reviews and the author’s own account, this novel was inspired by the dictatorship of Manuel Estrada Cabrera, who ruled as lord and master of Guatemala for 22 years, from 1898 to 1920.

At the request of family friends, Asturias had traveled to London in 1923 to study economics. He suddenly changes his mind and goes to Paris to take classes at the Sorbonne with Professor Georges Raynaud. It was in Raynaud’s classes that he discovered Mayan culture and spent years translating the Popol Vuh, the sacred book of the Mayans. In Paris, he writes poems and the novel Legends of Guatemala (1930), and also continued to work on Mister Presidentwhich was almost entirely written in France.

There is some confusion surrounding this novel, to which Asturias himself contributed. At the time, he defended social and protest fiction, that which revealed the horrors committed by Latin American dictators. On many occasions, he claimed that his book belonged to the genre of committed novels.

This is undoubtedly an important aspect of Mister President. The novel deals with realistic themes or prototypical Latin American local colors, based on the dramatic historical circumstance that dictators ruled most Latin American countries. But even if the novel of Asturias depicts this constant and recurring reality, it is surely not its most important aspect, otherwise this living history would not have stood out from these unsophisticated novels or would not have survived the test. time.

Certainly, like many other Latin American novels, Mister President falls into the category of committed novel. It depicts the havoc that dictatorships wreak by unleashing human tragedies, economic disasters and corruption in our countries. But Asturias does this in a unique way, frequently employing subtle, quirky, and unusual literary devices, without displaying the formal weaknesses and shortcomings often found in Latin American protest literature. More importantly, it does so in a much larger context than the typical social or political testimonial novel.

Asturias describes his novel as the struggle between good and evil in an underdeveloped society where evil seems to triumph. Not a single character in the novel is saved, not even young Camila, who is blackmailed into marrying the dictator’s favorite confidant: handsome Miguel Angel Face. She even attends a reception in the palace of the president who imprisoned her father, the exiled General Eusebio Canales, the alleged assassin of Colonel Parrales Sonriente and who ends up poisoned near the end of the novel. All the characters, whether soldiers, judges, politicians, rich or poor, powerful or oppressed, embody evil. They are thieves, cynics, opportunists, liars, corrupt or violent individuals, drunkards, servants, in short, among the most repulsive and disgusting human beings. And probably even Mr. President – ​​who decides who gets to live and who gets to die and who’s a drunk, a traitor, the mastermind of hundreds of twisted intrigues – isn’t the worst of them all. This designation falls either to his Judge Advocate or to Major Farfán, who, on the orders of the Head of State, commits the most violent and scandalous crimes: the first when he interrogates, humiliates and punishes Fedina de Rodas for the crimes committed by her husband, Genaro, against the Dimwit; and the latter, by detaining Miguel Angel Face at the port as he prepares to leave for New York by presidential order. Miguel is arrested, beaten mercilessly and buried in an underground dungeon where he has only two hours of light a day. He is fed on filth and survives by slowly rotting, slowly dying as his wife, Camila, contacts diplomats and politicians around the world, even in Singapore, hoping he is safe to learn, too late, that ‘Angel Face is also a victim of a monster who controls everything – lives, deaths and taxes are in his realm – with his little finger.

What is unique and transformative in this demonic book filled with hideous episodes is Asturias’ artistry, which is evidenced by the novel’s formal structure and original use of language.

Mr. President is qualitatively better than all previous novels in Spanish. Wonderfully mastered, the language of the novel owes a great deal to Professor Reynaud’s conferences on surrealism and other avant-gardes in vogue in France at the time when Asturias wrote it. No doubt he was also deeply marked by nostalgia for his distant country on the other side of the world and the many years spent far from Guatemala to meet up with his South American friends at the Café de la Rotonde in Montparnasse. His work has been influenced by automatic writing, the mixture of reality and dreams – nightmares, should I say – an unusual poetic musicality, and the fusion of forms that convert the story into a great romantic and poetic spectacle. and where reality becomes street theater and apocalyptic fantasy. all the way.

The first chapter, “In the Portal del Señor”, is unforgettable. A whirlwind of one-armed, one-eyed, blind, and crippled beggars have been reduced to the most primitive bestiality and abuse one another with the deepest of misery and savagery. Pelele – the Dimwit – is one of them; this poor devil is then needlessly killed by Lucio Vásquez. At the end of the book, the dictatorship remains intact – sure, the Portal del Señor is destroyed, but the hideous system it symbolizes is not.

The language of Asturias is multifaceted and not the Spanish that all the characters in the story use. Despite their lack of modesty, the upper classes speak more or less decent Spanish. This is also the case with Angel Face, Camila, a handful of ministers and officers, and even the President. But as the novel explores the language of the lower classes, the richness and invention of expression increases and shifts, introducing invented words, songs, bold grammatical renderings, startling metaphors, rhythms , terms commonly associated with native insects, plants, and trees. A provincial world of wilderness not yet dominated by man is depicted in a country that finds itself isolated and slowly changing, before the advent of cars and planes, and in which a trip to New York involves a long drive. by train and boat. Guatemala is not mentioned once, but it doesn’t matter – everything points to this unfortunate but beautiful country: the capital is far from the ocean, surrounded by rivers, jungles and volcanoes. Its unfortunate citizens will know only hideous dictatorships long after the end of the novel – at least until 1950 – and will incorporate into their thought and their diction an extraordinary patter, inventing words, fantasizing and improvising while speaking, ceaselessly creating in everything they say and exclaim, thus transforming reality into enchantment, infernal moreover, where time turns in circles, around itself, as in a nightmare. Life is depicted as a theatrical tragedy repeated ad infinitum, where human beings are only actors and, sometimes, mythical characters. Chapter XXXVII, “The Dance of Tohil”, in particular, looks more like a painting or fresco inspired by the distant ancestors of the Mayan K’iche’ archaeological past, a historical reminiscence that connects to the rich history of Guatemala. All other chapters correspond to an updated present in which a humble, isolated and primitive people, subjected to the unspeakable horrors of a brutal and incarcerating regime, live in abject misery. But there is something that sustains the people of the land and keeps them from disappearing: the extraordinary life force with which they resist mistreatment and humiliation, a tragic existence steeped in mud, jungle and animals and the extremely creative way in which they survive and employ language. Despite the depth of its social and political disgrace, its people are nonetheless capable of creating and assuming a distinct personality, of inventing a new language, music and rhythms that shape it, make it unique and guarantee its survival.

Asturias has achieved something unique in this novel. Its linguistic beauty is part of the historical truth: the Guatemalan way of speaking is creative and personal. Asturias is not just a scribe of this linguistic reality, but also its creator – someone who chooses to plunge into the bottomless fountain of how a nation and its people speak, but also manages to polish and add something thing of his own fantasies, obsessions, and an excellent ear to give him his personal cachet. Mister President is undoubtedly a work of art, a true tour de force of great originality and creativity, perhaps closer to poetry than fiction or, perhaps, a rare fusion of these two genres.

Many episodes of the novel begin in a realistic vein but, little by little, Asturias builds a visionary and metaphorical poetic language, which leads him to abandon a realistic and objective landscape for that of legend, dream, theater, myth and pure invention. This is what makes this novel so unique, so new, and of such high literary value that almost a century later, Mister President continues to be one of the most original Latin American texts ever written.

The nostalgia of Asturias for his native land certainly played an important role in the writing of this novel. And yet, the distance between Asturias and Guatemala – he lived in Paris – gave him a kind of freedom that many writers living in their country of origin did not have, since they were forced to live through a brutality that prevented them from writing freely, without fear of persecution and censorship. Probably Miguel Ángel Asturias was not fully aware of the quality of a novel he had written and of the breadth that he would never repeat again, because the novels, short stories and poems he subsequently wrote were closer to the narrower and somewhat demagogic “engagement” literature. of the dictator novels he had previously championed. He had not realized that the great merit of Mister President was precisely that he broke that tradition and elevated the politically engaged novel to a whole new level.

What are car title loans