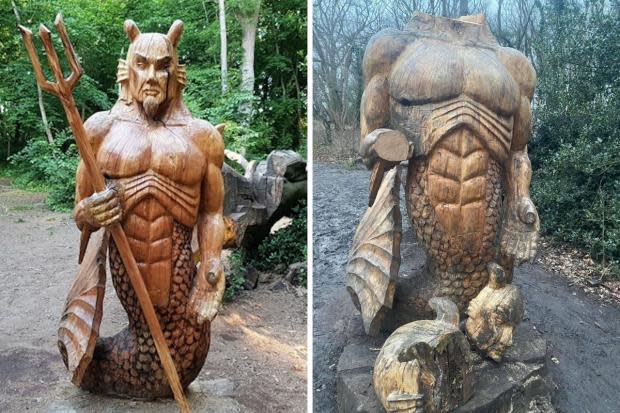 The national park is home to a number of handmade wooden sculptures by sculptor Darren Tilley and hundreds of visitors travel there to see his creations.

But a family was shocked to find the triton-like sculpture called Neptune deliberately damaged.

The head looked like it had been cleanly cut off, then the head had been cut in half again and left in the area.

The sculpture’s hand and Neptune’s signature trident were also removed but were not found at the scene.

The Discovery of Char Morgan

Char Morgan, 32, was walking in the park with his 10-year-old son, Harvey, when they came across the damaged statue.

“He even tried to fix it by trying to hold his head back. I was just really bummed someone did that.

“I just don’t understand who walks through the park with an axe.

“I was worried that all the animals would be damaged equally, but so far they are fine.”

Char posted the photo on Facebook, which drew a strong reaction from the community, with people either angry or in shock.

Read: A tree damaged by fire becomes a superb sculpture

This particular sculpture was created from the remains of a burnt tree that Tilley worked on from November 2019 until the following year.

photography club Member Jan Jelley even provided some photos of the tree which had been filled with concrete before and then of the work in progress.

Neptune isn’t the only sculpture in the park to be damaged fairly recently, as the impressive Every Cloud Caterpillar was discovered collapsed and in pieces last October.

Swindon Community Notice Board member Tracy Brett posted the unwanted update on the sculpture’s destruction, alleging in the post that it was caused by “mindless vandals”.

Dozens of people commented, lamenting how anyone could act this way.

Swindon City Council and Swindon Rangers have been approached for comment and an update on the damage to Neptune and the disappearance of Caterpillar.

“Creative Seeing” in the Paintings of Elmer Bischoff and Tom Burckhardt