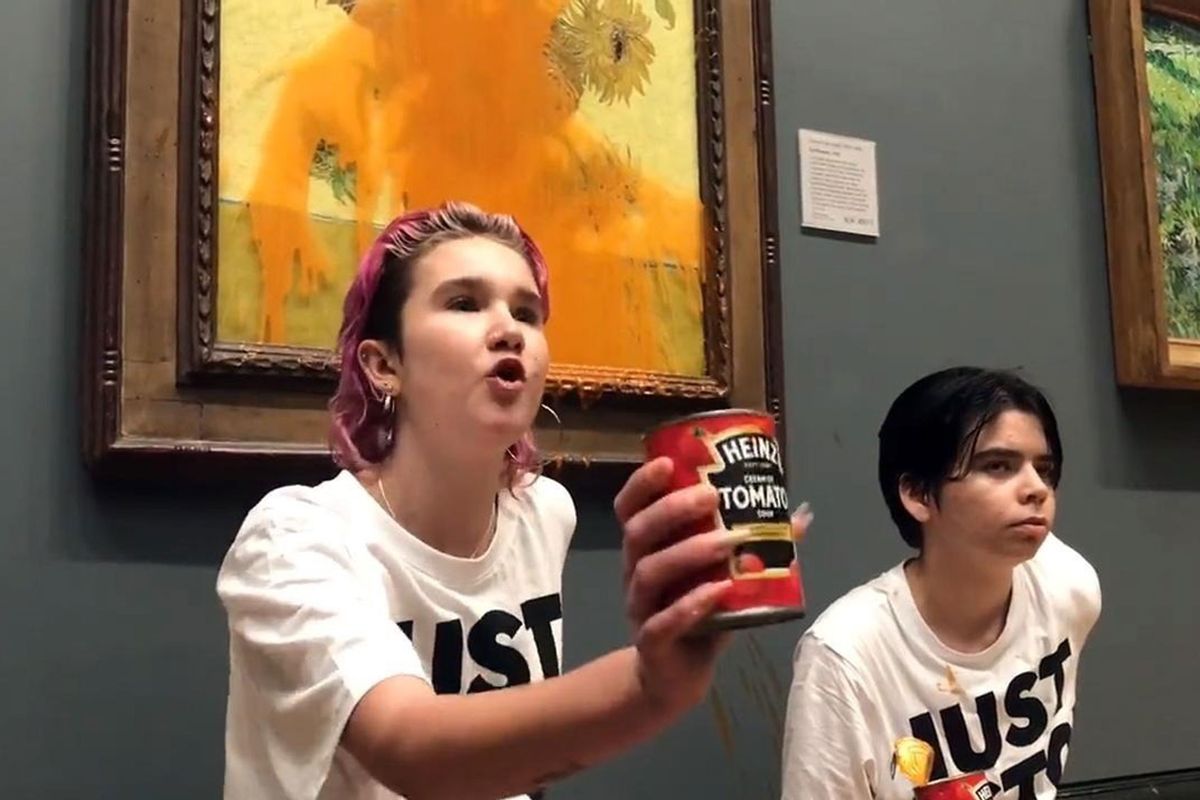 Soup on the van Gogh: the painting is fine, and the children are fine

“Let’s stop giving these attention-seeking adult children the coverage they clearly need,” said UK Foreign Secretary James Cleverly. tweeted last Saturday (shortly before his own government collapsed). It came in response to a shocking viral video of two young people throwing canned tomato soup at a glass-covered painting by Vincent van Gogh at the National Gallery in London, then sticking to the wall behind it. Gasps can be heard in the background. Someone says in amazement, “Oh my God.” Another calls for security.

Meanwhile, the two activists – both in their early twenties – have been called just about every name in the book, including “philistines, barbarians, idiots, [and] terrorists. » Others have unsubstantiated suggestion that since the organization these young people represent, Just Stop Oil, is funded by Aileen Getty, this act was only “performative. The oil companies pay them to make real activists look ‘crazy’.

This is clearly false. Aileen Getty is the granddaughter of Jean Paul Getty, who became a billionaire – and perhaps the world’s wealthiest private citizen in the 1960s – due to his success in the oil business. Aileen Getty inherited some of that fortune and in 2019 co-founded the Climate Emergency Fund, which says on its website it has funded 39 organizations with a total of $4 million. Just Stop Oil received $1.1 million from the Getty fund.

There is nothing conspiratorial there. Northern economies have jeopardized the entire future of humanity, indeed the entire biosphere, and since the more diplomatic strategies of presenting the facts, educating the public, confronting politicians and even blocking traffic have so far failed, it might be time for more drastic (but still non-violent) action.

Climate scientists have been telling truth to power for decades: James Hansen told Congress in 1988 not only that the Earth’s thermostat was rising, but that “global warming [had] reached a level such that we can attribute with a high degree of confidence a causal relationship between the greenhouse effect and the observed warming. of the most successful documentaries in history, and which won Gore the Nobel Peace Prize in 2007. Nothing happened. And Sir Nicholas Stern sounded the alarm in his 700-page Stern Report , commissioned by the British government, which concluded that climate change “is the biggest and most widespread market failure ever seen.” Nothing happened.

When the IPCC’s first assessment report was published in 1990, there were about 354 parts per million (ppm) of carbon dioxide, or CO2, in the air. Five years later, at the first United Nations Climate Change Conference, that figure had risen to 360 ppm. In 2005, when the Kyoto Treaty entered into force, the concentration of CO2 reached about 380 ppm. At the time of the signing of the 2015 Paris Agreement, the global average concentration of CO2 reached 401 ppm. This year, the number reached 421 at the Mauna Loa Basic Atmospheric Observatory in Hawaii, and the room where I am writing this article, on a university campus in Germany, has a CO2 monitor that reads 456 ppm.

What will it take to convince the great nations of the North to take the climate crisis seriously? Civil disobedience is part of the answer, but so are the tactics that bring global attention to militant organizations like Just Stop Oil, and that is precisely what has happened. “It was the tomato tossing heard around the world,” noted Dana Fisher, a sociologist at the University of Maryland. And the message is clear: Do something now, because time is running out. As one of the activists said after sticking to the wall:

What is worth more: art or life? Is it worth more than the food? Worth more than justice? Are you more concerned about protecting a painting or protecting our planet and people? … The harvests are bad. Millions of people die in monsoon fires and severe drought. We cannot afford new oil and gas. It’s going to take everything we know and love.

This year again, Pakistan has suffered unprecedented flooding due to climate change. Nearly 32 million people have been displaced and more than 500 children have died. “Roads and bridges have been washed away”, and the World Health Organization is now warning of a “second catastrophe” caused by waterborne diseases. According to Babar Boloch, spokesman for the UN refugee agency UNHCR, it could take “up to six months for the floodwaters to recede” in parts of the country.

Or consider the Living Planet Report 2022, which found that since 1970, “populations of mammals, birds, fish, reptiles and amphibians” have declined by 69%. Freshwater populations have been particularly affected, with declines of even more amazing 83 percent. Other studies claim that we are only in the early stages of sixth major mass extinction event in the 3.8 billion year history of life on Earth, and which humanity has already gone through five of the nine planetary boundaries, which are defined as the “biophysical prerequisites for human development”. Yet another study warns that humanity is now facing a

risk that self-reinforcing feedbacks will push the Earth system toward a planetary threshold that, if crossed, could prevent climate stabilization at intermediate temperature rises and cause continued warming on a “Greenhouse Earth” pathway, even if human emissions are reduced. Crossing the threshold would lead to a global average temperature much higher than any interglacial in the past 1.2 million years and sea levels significantly higher than at any point in the Holocene.

As an article in Nature published the following year stated, “if damaging tipping cascades can occur and a global tipping point cannot be ruled out, then this is an existential threat to civilization” . Or to quote Aileen Getty – the woman believed to be part of a plot to make climate activists look bad – “Let’s not forget we’re talking about extinction”, to which she added: “Didn’t we not the responsibility to take every means to try to protect life on Earth?”

Want a daily recap of all the news and commentary Salon has to offer? Subscribe to our morning newsletter, Crash Course.

This brings us back to the activists of Just Stop Oil. Were their actions “attention seeking,” as Cleverly wrote? Yes, and in fact by tweeting this, Cleverly himself – rather awkwardly – ​​gave them even more publicity. Young people are desperate, and their desperation is fully justified by the best science available. The situation is dire: the habitability of our planet, as well as the survival of entire peoples and nations, is in the crosshairs – especially the peoples and nations, mainly in the countries of the South, which have contributed the least to the climate crisis. As one of the young activists who took part in the van Gogh incident later said in an interview, which deserves to be quoted at length:

I agree that sounds like a bit of a ridiculous action. I agree, it’s ridiculous. But we don’t ask the question: “Should everyone throw soup on the paintings?” What we do is start the conversation so we can ask the questions that matter. Questions like… “Is it normal that fossil fuels are subsidized thirty times more than renewables, when offshore wind is currently nine times cheaper than fossil fuels?” … This is the conversation we need to have now. Because we have no time to waste. Last year Sir David King said that what we do over the next three to four years will determine the future of mankind. So we use these actions to get media attention because we need to get people talking about it now.

For my part, I applaud his actions, which were taken knowing that van Gogh’s painting was protected by glass and would therefore not be seriously damaged. The children are Okay about the urgency of the moment, about the importance of starting a conversation and galvanizing political action. If people want to blame someone for such actions, blame the politicians in power who have done nothing to stop the climate crisis and have pushed desperate young people to see such actions as the only way forward. If our political leaders had listened to James Hansen, Al Gore, Sir Nicholas Stern, the IPCC, Sir David King and any other climate scientists or activists who have been shouting for decades that ‘our house is on fire’ none of this would seem necessary. .

We should expect more stunts like this in the future – until meaningful steps to stem the climate crisis are taken. Indeed, the Getty Climate Emergency Fund has “sworn [that] similar and thrilling stunts will take place in different countries in the coming weeks. “Am I shocked by what happened at the National Gallery? Absolutely, but not because of what these two brave young people have done to an artistic masterpiece that will be worthless if the climate crisis destroys our civilization.

on the climate crisis