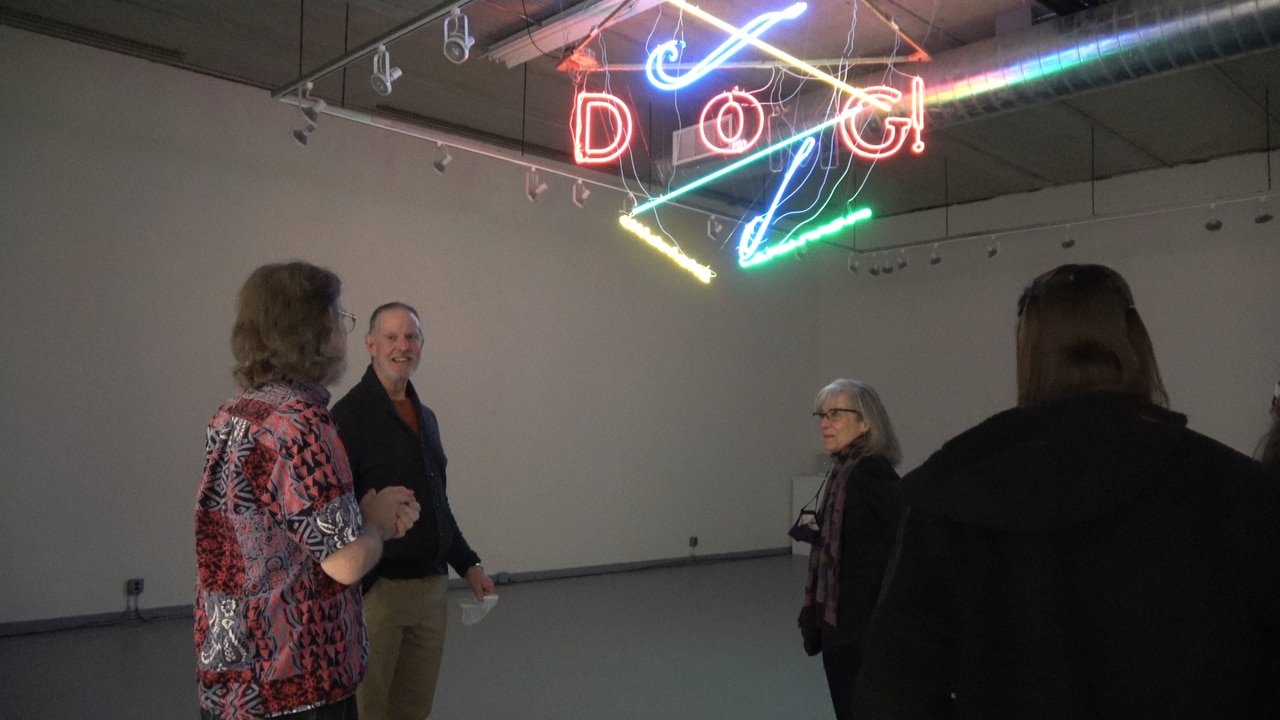 Skaneateles artist Lorne Covington wanted to learn the art of making neon tubes, so he decided to take a class. And he learned something that sparked a 20-year passion: LED lights replaced neon, and when neon stores closed, they sent the tubes to landfill.

“As LED lighting has become cheaper and cheaper, most neon sign shops have either closed or switched to using LEDs,” he said. “Without additional market demand to entice new workers to learn the trade, direct knowledge of neon lighting manufacturing resides with fewer and fewer people.”

Covington decided that instead of learning how to make new neon lights, he would salvage the abandoned stashes and reuse them in a sculpture. “‘Recycled Light’ is the first installation of this type of reclaimed neon, drawn from a collection of over 400 neon tubes of all shapes, colors and many words and letters – many of which are probably over 50 years old”, did he declare.

His exhibit, “Recycled Light: An Ode to Neon,” has been running since March 26 and will have its official opening from 5-8 p.m. on Friday, May 6 at the Schweinfurth Art Center. The exhibition ends on May 15.

“We are thrilled that Lorne is creating a 3D sculpture out of 2D neon,” said Davana Robedee, Program Director Schweinfurth. “His work is inventive and immersive, giving visitors a unique experience.”

Covington has created many other immersive and interactive light and sound exhibits such as NOIRFLUX, a name taken to evoke the idea of ​​movement in darkness. Many of his works have been exhibited at the Museum of Science and Technology in Syracuse; the Port Authority Bus Terminal in New York; Artechouse in Washington, D.C.; and the Smithsonian Arts & Industries Building in Washington, DC.

Paradise, an interactive sound exhibition created by Covington and Doug Quin, first appeared at Schweinfurth in 2017 before being shown at Venice International Performance Art Week in Venice, Italy.

Neon lighting is a process of generating light by passing electricity through a noble gas. While neon is often used, argon and xenon can also be used. When properly manufactured, lamps have an extremely long life, measured in decades of continuous use.

Covington constructed wooden triangles from which he hung the neon tubes. The triangles are raised to the high ceiling of Schweinfurth’s second-floor Davis Family Gallery, so visitors can walk underneath and trigger them with their movement. He also installed four speakers in the room that produce an ambient soundscape of Balinese Gamelan sounds in sync with the lights.

Lights come in many different shapes and colors. They spell words like Concierge, VIP Room and FREE TV. “I hope to give viewers the opportunity to see this part of our popular culture in a new way, like the raw beauty of light that it is,” Covington said.

If you are going to …

WHAT: Official inauguration of “Recycled Light: An Ode to Neon”

DETAILS: Covington will give an artist talk on his piece at 6 p.m. during the opening

COST: The opening is free and open to the public. The exhibit is on display until May 15 and admission is $10 per person.