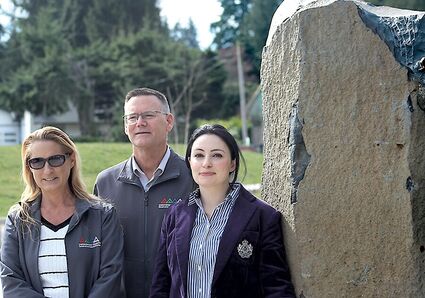 ‘Seed of Hope’: Sunlight enters the portal of a sculpture to an enamelled bronze seed

As the cover of Lynnwood artist Tsovinar Muradyan’s sculpture in Esperance Park lifted, unveiling his creation, those in attendance stepped forward to glimpse the centerpiece of the work: an organic cavity at the top of the piece of stone four feet high.

With the sun shining, the portal reveals sunlight and shadow. The light then enters the cavity to shimmer on an enamelled bronze germ.

Sunlight and its shoots convey Muradyan’s message: “Hope grows where light is given”. Muradyan said the “Seed of Hope” sculpture was inspired by the phrase “And then there was light” from the Book of Genesis.

When the Snohomish County Arts Commission issued the call for artists in September 2020, they were looking for a piece to anchor the round public square with an eight-pointed star formed on the concrete to symbolize “hope”.

Muradyan said there were a few factors that led her to apply for a commission, including the eight-pointed star and that “Espérance” translates to “hope.”

“When I visited the park, I saw the sun,” Muradyan said. “It gave me ideas.”

After winning the commission, Muradyan created his sculpture in stone, metal and bronze at the Marenakos Rock Center in Issaquah. The base contains 1.5 tonnes of Valdes sandstone from the Bedrock Natural Stones quarry on Valdes Island in British Columbia.

The installation day could not have ended happier.

“It had been raining for several days,” said Muradyan, who holds a master’s degree in architecture and a doctorate in sustainable architecture. She is employed at Classic Foundry in Seattle, where she works on public projects, specializing in commercial and retail design.

“The foundation was ready, and we had to install the stone sculpture. The hardest thing was to put it at a right angle. A crane lifted the stone, and we had the possibility of turning around the tube. After a few rotations, at right and left, it was really rainy and cloudy, and I just said put it down.”

Once the sculpture was firmly in place, something magical happened: the clouds dissipated.

“The sun just sank into the opening,” Muradyan said. “We just froze in place. It was so dramatic. We said we got our approval from nature. At different times of the day, the sun will fall on the sprout like a light force. Every morning, the glow of the sun will shine through the rock and simply inspire hope in people.Hope grows where life is given.

Tsovinar Muradyan, 40, moved with his family to the United States just over four years ago from the former Soviet republic of Armenia.

“There are a lot of opportunities for me here,” Muradyan said. “I have a strong interest in decorative arts and sculpture.”

This led her to create works of art from a mixture of materials: stone, bronze, metal, wood and glass.

“Sculpture has become a new language for me to express my feelings and concerns towards nature, human interactions and relationships. And I truly believe in the power of telling stories through my works.”

You may have noticed two of Muradyan’s pieces in the city, although they are on a much smaller scale than “Seed of Hope”.

Tsovinar Muradyan, right, was joined by Snohomish County Commissioner Stephanie Wright and Snohomish County Director of Conservation and Natural Resources Tom Teigen at the unveiling of the sculpture at Esperance Park on 12th of March.

In August 2020, she was selected by the City of Edmonds Arts Commission to install two permanent public sculptures above the new flower basket pots.

“Freedom” is on Fourth Avenue North between Salt & Iron and ChurchKey Pub. “Magical Day” is across from the Waterfront Coffee on Main Street.

Later this month, Tsovinar will install a piece for the city’s “On the Fence” temporary exhibit program on the fence at Second Avenue South and Dayton Street in the Art Works parking lot. According to the city, the work will use pieces of wood carved and painted in an abstract way to convey the movement of wind, waves and trees.

For now, she invites residents to take inspiration from “Seed of Hope”.

“The French sculptor Falconet said: ‘It is necessary for a sculpture to stand out from its background and declare itself distant from the space in which it is seen,'” she said.

With “Seed of Hope”, Tsovinar shows how it is done.