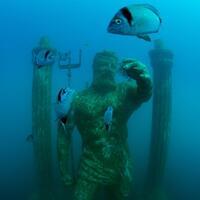 Side Underwater Museum, Turkey’s first underwater museum, is in a state of deterioration due to lack of maintenance and anchors from poachers despite the ban.

The museum was built by the Antalya Shipping Chamber in 2015 around Side in the southern province of Antalya’s Manavgat district at a cost of 400,000 Turkish liras. In the museum, which was visited by 30,000 people in the first year, there are 117 sculptures in five different themes. The making of the sculptures was completed in nine months.

In three sections, located at a depth of 11, 18 and 22 meters, 1.5 miles from Side, there are statues representing the war of independence, the camel caravan in the deserts, the Mevlevi and the mythological god of the sea Poseidon, which is the largest and most striking among the others.

Visited by an average of 70,000 people until 2021, the museum offers diving enthusiasts a fantastic view. But the museum is now a victim of neglect. Many moss-covered statues on the bottom of the sea, which have become nests for fish, have either broken or fallen off because they are disconnected from their bases.

Although any form of hunting is prohibited around the area, where the Side Underwater Museum is located, nets thrown by poachers also cover the statues. Anchors dropped to stabilize boats and fishing also destroyed some of the statues, revealing the iron skeleton within.

Şahin Gerçek, owner of a diving school in Side, said the appearance is ugly and the anchors can also harm vacationers who want to dive.

“Professionals and amateurs can dive in this area. We are concerned that the museum has been neglected. Since 2015, no one is interested in it. The ghostly nets knocked down the statues. We have identified them. There are broken statues. It’s dangerous. The irons of the broken statues are exposed. Divers can be injured by these irons when visibility is poor. Divers are also disappointed when they see this view,” Gerçek said.

The director of the Antalya branch, Cüneyt Koşu, of the Chamber of Maritime Commerce of Istanbul, Marmara, Aegean, Mediterranean and Black Sea Regions (IMEAK), said that the museum hosts many tourists.

Stating that this museum project was done for the development of Side and to draw attention to the submarine, Koşu said he was inspired by an underwater museum in Mexico.

Noting that Side’s underwater museum looks abandoned, but IMEAK still allocates a budget for the museum, Koşu said, “Actually, we just changed the broken buoys. We allocate a budget for everything necessary based on annual needs. The carvings are expected to be damaged over time. It’s inevitable. However, this area, which has been declared a prohibited area, must be well protected by the locals. I saw it too when I was diving. The statues have been damaged due to poor anchoring and net fishing. The statues have broken and are covered with netting.

The recent situation of the damaged sculptures was recorded by underwater cameras. While most of the statues were covered in algae and became nests for sea creatures, some statues were seen to become disconnected from their bases and fall over. In the groups of sculptures representing the War of Independence, it was seen that the guns of the soldiers were broken and some of them fell to the bottom of the sea, detaching themselves from their points of connection.