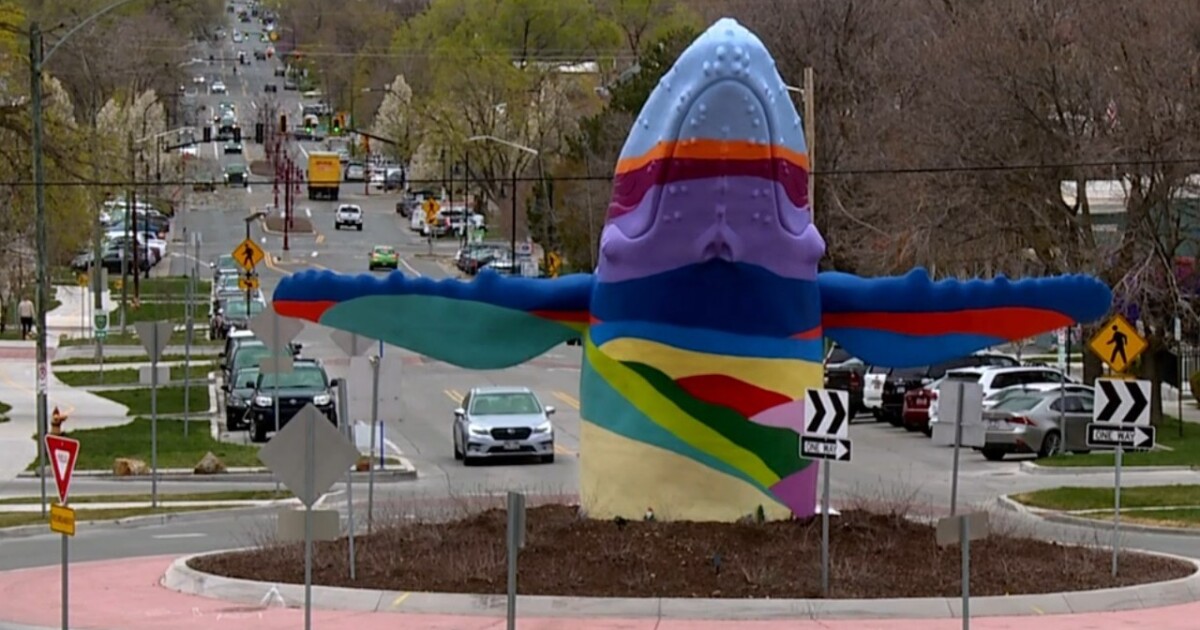 Lots of people stop to take pictures and some drive by shouting their disgust at the new public art installation.

The massive artwork titled “Out of the Blue” creates conversational ripples.

DJ Smith, the manager of the Caffe Expresso located just opposite the sculpture, has been on board from the start. He thinks the title and the illustration correspond to the 9and & 9and neighborhood in which it is located.

“The neighborhood is a bit out of the blue for Utah,” Smith said.

Smith and other Caffe Expresso baristas can testify that the greasy mammal creates a rubber roundabout.

“Well, there were a ton of people that came to see it, so I would say it definitely brought people to the area,” Smith said.

Several people made 900 South and 1100 East a destination on Thursday so they could see the life-size humpback whale up close.

“We went out to see the whale, we think that’s progressive, forward-thinking. Mixed reactions are okay, but it’s here, learn to love it,” resident Kaye Donahoe said.

Sondra Saunders grew up in Salt Lake City and said she loved the colors of the whale sculpture and welcomed its presence in the neighborhood.

“It’s different and it forces you to stop and watch it and have an opinion,” Saunders added.

Local artist Chuck Landvatter has mixed feelings about the statue.

“I have to say overall I like people talking about it,” Landvatter exclaimed. “My personal opinions are less important than the fact that it does what art should do…and get people talking and hopefully civilly.”

Landvatter added that he doesn’t think there has been talk of a public artwork since Building 337, which was a 2007 collective artwork project.

The sculpture is the work of artist Stephen Kesler and artist Mike Murdock painted the mural on its surface.

“The fact that people come down to watch anything and take a second to wonder is worth something,” Smith said.

Yakima Valley Do you like rock painting? Free event this Saturday