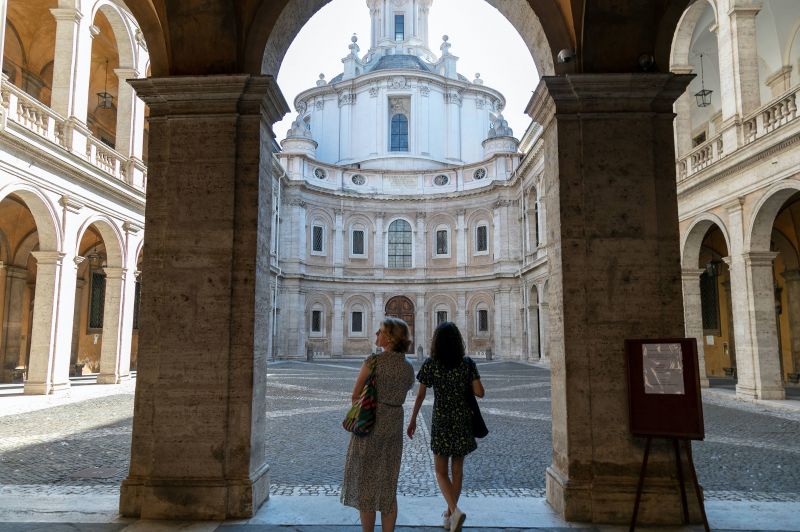 Restoration work in progress at S. Ivo alla Sapienza after the damage caused by the 2016 earthquake.

The Romanesque Church of S. Ivo alla Sapienza – a masterpiece of Baroque architecture designed by Francesco Borromini – underwent the first phase of a major restoration project after suffering damage from the earthquake five years ago.

The Special Superintendency of Rome is overseeing the restoration of the magnificent complex of churches designed by Borromini between 1643 and 1660 for the city’s former La Sapienza University.

Restored areas, presented to the press on Friday, include the long-inaccessible Borromini Corridor connecting Palazzo della Sapienza to Piazza S. Eustachio, as well as numerous rooms including the Great Hall of the Alessandrina Library.

The second phase of the work is currently underway, with an emphasis on strengthening the structure “without being aesthetically invasive”, and funding has been allocated for the restoration of the interior of the church.

The long-term project began after the complex suffered cracks and structural damage from the 6.5 magnitude earthquake that struck Norcia, in the central Umbria region of Italy, on October 30, 2016 .

Home to the State Archives of Rome, S. Ivo alla Sapienza is located on Corso Rinascimento, near the Italian Senate, near Piazza Navona.

Borromini based his unique geometric design around the cramped 16th century cortile, or courtyard, designed by Giacomo della Porta.

He uses concave and convex surfaces in his designs which also feature decorative elements related to the three popes under whom the building was constructed.

These included the bees of Urban VIII Barberini, the dove of Innocent X Pamphili, and the stars of Alexander VII Chigi.

Who was Francesco Borromini?

Born in 1599, Borromini was an Italian-Swiss architect whose legacy in Rome continues to fascinate three and a half centuries after his death in 1667.

Borromini’s name is forever linked to his contemporary and great rival Bernini, with many historians agreeing that this fierce rivalry pushed the two architects to the limits of their genius.

Although their styles differ – Borromini was more innovative and modest than the triumphant Bernini – they paved the way for Roman Baroque architecture.

A depressed character with an unstable temperament, Borromini committed suicide in Rome at the age of 67. He is buried in the church of S. Giovanni dei Fiorentini on Via Acciaoli.