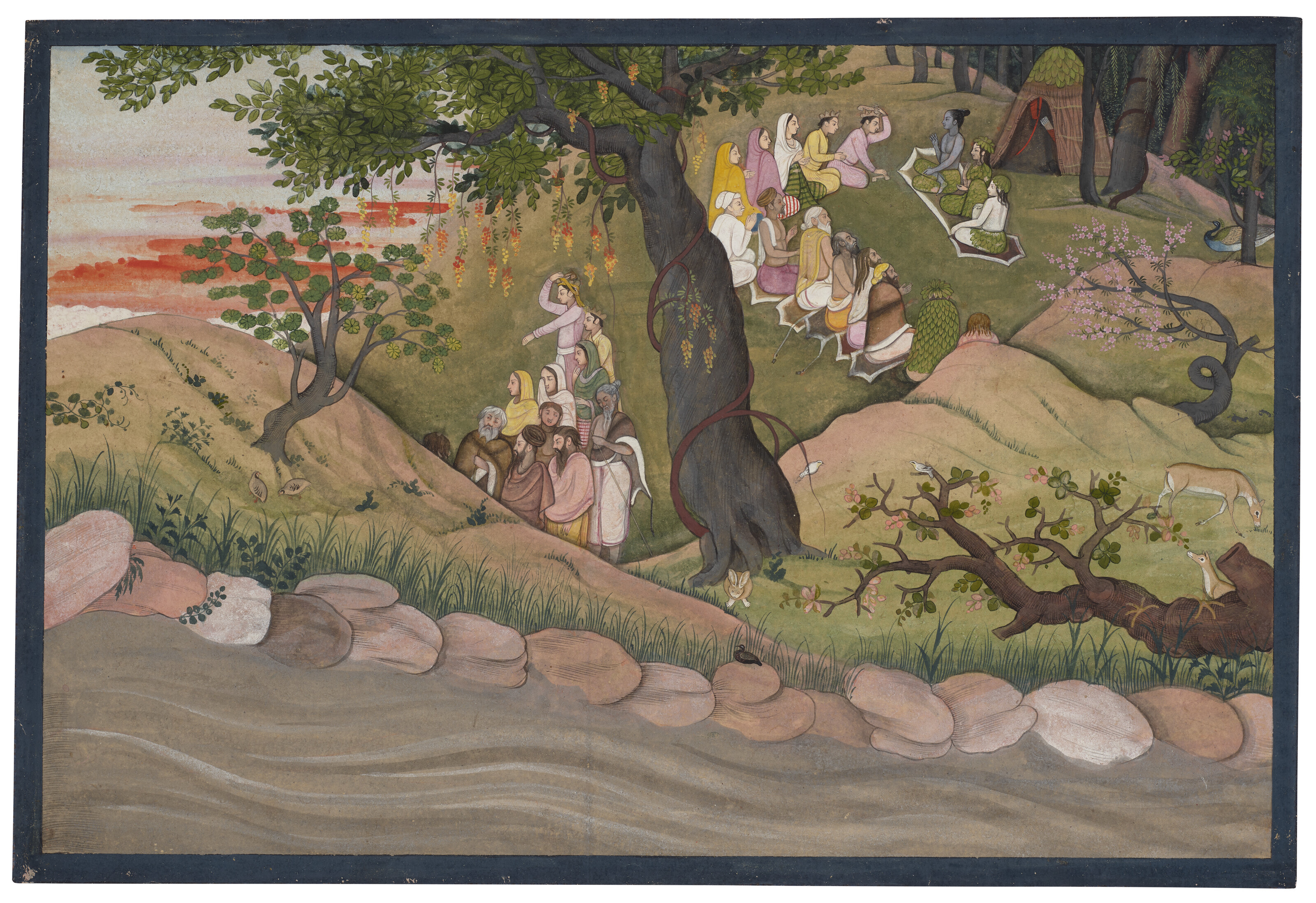 Exiled from the kingdom of Dandaka, Rama, Sita and Lakshmana, dressed in leafy robes, build themselves a house in Panchavati, an enchanted wooded valley in the heart of the Dandaka forest. As news of Rama’s banishment spreads, sages, hermits, and even nobles flock to his grassy shelter to pay homage to the “royal hermit.” The ensuing philosophical exchanges so liberate the region’s religious seekers that Rama finds himself engaging in these conversations on a daily basis.
This painting is from a scattered series of the Ramayana, painted in Kangra by a master of the first generation after Nainsukh and Manaku. The series was originally owned by dealer CL Bharany from whom it takes its name, although it is also sometimes referred to as the ‘Second Guler’. Ramayana series. The series exemplifies the Pahari style at its finest, presenting a world of refinement and delicacy on every page. This group of remarkably gifted painters produced some of the best known and most celebrated series of Indian painting, including the current series, the ‘Tehri Garhwal’. Gita Govinda and the ‘Modi’ Bhagavata Purana. The three works are all closely related stylistically and ichnographically and, according to WG Archer, these series were all commissioned by the mother of Raja Sansar Chand de Kangra (r.1775-1823) for her marriage in 1781. These series together rank among the finest achievements of Indian painting, becoming one of the most coveted illustrations among collectors.
The artists of this series reveled in the splendid beauty of Panchavati. As described in the Ramayana by the sage Agastya, Panchavati is a lovely, delicious and sacred land, full of roots, fruits and all kinds of birds. As a result, the forest depicted in this scene is radiant and idyllic. Trees with streamlined trunks, wrapped in serpentine vines, grow lush, varied foliage with cascading floral flares. Wild animals including fawns, pheasants, rabbits and peacocks graze the layered hills, which position Rama’s hut to overlook the streams of the holy Godavari River. The artists pay homage to the lush nature of the Pahari region by using the landscapes surrounding the Beas River and the Kangra Valley to inspire their interpretations of the Dandaka Forest. Overall bright, lively, and lovingly colored, the pages in this series are among the most stunning celebrations of nature in Pahari painting.
Although the series is unnumbered and not known to the public until it aired in the 1970s, it is estimated that around 100 pages of this Ramayana survive in private and public collections. The first three chapters of the series comprise the ‘Bharany’ Ramayana, while the later books were completed by the same artists in a somewhat later continuation series, variously attributed as having been completed between 1780 and 1800. individual paintings are particularly inventive and varied. — some cityscapes, others idyllic natural landscapes, and a succession of battle scenes — although many follow a similar composition along a diagonal, with a succession of planes and perspectives.
Among the “Bharany” section, five illustrations from the Edwin Binney III collection are in the San Diego Museum of Art (acc. no. 1990.1267; 1990:1260; 1990:1265; 1990:1266; 1990:1268); two illustrations are in the Brooklyn Museum, New York (accession no. 78.256.3 and 80.181); four illustrations are in the Metropolitan Museum of Art (acc. nos. 1985.398.14,1976.15, 1976.14, 1976.15); five illustrations are in the Rietberg Museum (acc. no. RVI 981 and four published in Britschgi and Fischer no. 11, 13 37 and 58); and three illustrations are in the Philadelphia Museum of Art (acc. no. 2002-11-1, 2004-149-73 and 1977-11-1). The Minneapolis Museum of Art also recently acquired a page from the series formerly in the Paul F. Walter Collection (acc. no. 2021.7). A page from the series recently sold at Christie’s New York on March 22, 2022, lot 466 for $201,600.