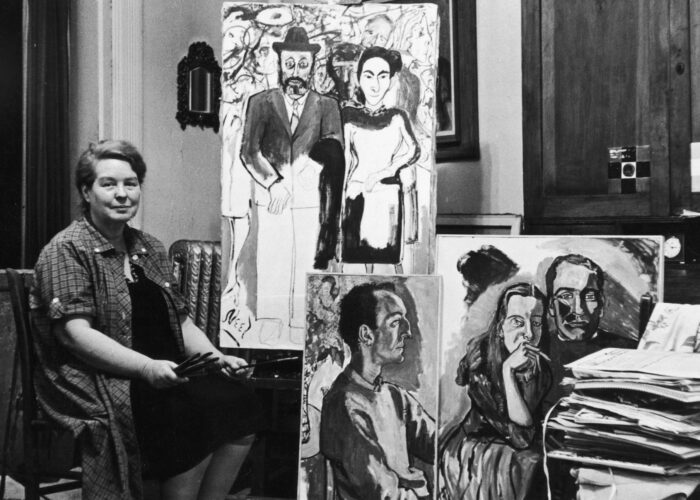 One of the oft-repeated stories about Alice Neel is that she didn’t like the word “portrait.”

The American painter found the term elitist and instead referred to her works as “pictures of people”, a more democratic description that reflected the diversity of racial, social and economic backgrounds of those she painted. As an overarching label for all of Neel’s work, the term is apt; even in his cityscapes and still lifes, people are always Neel’s real subject.

“Alice Neel: People Come First”, on view at the De Young Museum from Saturday March 12, is an exhibition that drips with humanity. It’s not just the humanity of her subjects – who include neighbors, fellow artists, radical activists, mothers, children, friends and strangers – it’s how humanely and intimacy in his gently expressionist and figurative style. There is a vulnerability in many of the poses and faces of Neel’s subjects. By engaging in the works, one can almost feel the desire to convey their stories in Neel’s gaze.

“She had this deeply empathetic and humanistic streak in her work,” says Lauren Palmor, assistant curator of American art at de Young. “But also practically, it was a working mother. She couldn’t afford mannequins, so she painted the world around her.

The people around Neel were more than enough to draw from, with his ability to capture a person’s essence. This is clear in the Christ pose which reveals the suffering of the tuberculosis patient in “TB Harlem” of 1940; the exhaustion of the mother in “The Spanish Family” of 1943; or Robbie Tillotson sitting coolly cross-legged, flashing a peace sign in a 1973 work.

Neel (1900-1984) was born into a middle-class family in Merion Square, Pennsylvania, and studied art at the Philadelphia School of Design for Women (now Moore College of Art & Design.) She s traveled to Cuba in 1924, where she met her husband, the painter Carlos Enríquez, and was first exposed to the radical politics that would color her social circle and her art for the rest of her life.

Later that decade, the couple moved to New York. There, after his daughter Santillana died just a month before her first birthday in 1927, Neel’s work took on dimensions of anxiety and fear of loss. This was especially true in her eventual work painting unwavering images of motherhood. (Neel had three other children: daughter Isabetta with Enriquez; and sons Richard Santiago, with musician José Santiago Negron, and Hartley Neel, whose father is unknown – all of whom she later painted.)

During the Great Depression, Neel turned his gaze to his Spanish Harlem community, which included the working poor, fellow artists like poet Kenneth Fearing, and social activists like Mother Bloor and Pat Whalen. His protest scenes, like 1936’s “Nazis Murder Jews” and 1950’s “Save Willie McGee,” show the vibrant activism of Neel’s world.

During the 1930s, she also began to paint female nudes. but like her works showing motherhood, they were devoid of the typical idealization. After World War II, Neel expanded his practice to painting pregnant women’s nudes without compromise. Among his later works is a nude self-portrait from 1980 to 80.

The exhibition, which originated at the Metropolitan Museum of Art, begins by examining Neel’s early work from the 1920s and 30s and places it directly in the context of its time and place with examples of his cityscapes from New York.

In his protest images and works like “Fish Market” (1947) and “Central Park” (1959), humanity begins to emerge from the city. Eventually, you find yourself confronted with the human presence of his subjects, as in 1967’s “The Black Boys,” with their eyes looking upward; curator Henry Geldzahler’s apparent discomfort as he braces himself with one hand on the back of his chair in a 1967 work; and the determination of “Marxist Girl” from the same year as she similarly prepares herself, but defiantly throws one leg over the arm of a chair.

Two views of playwright and Andy Warhol superstar Jackie Curtis — 1970’s “Jackie Curtis and Ritta Red” showing Curtis in drag and 1972’s “Jackie Curtis as a Boy” — also show just how connected Neel has remained to the news. wave of foreign creators. the life. Other sections offer collections of works by Neel on mothers, pregnancy and children as well as explorations of male and female nudes.

In addition to the sense of connection to her subjects, what “People Come First” most ably demonstrates is how far she was ahead of contemporary discussions about who should be portrayed in the portrait. When viewed en masse, her works reflect the urban racial and cultural mix she lived in in a way that feels very relevant in 2022.

During Neel’s lifetime, much of the art world turned to abstraction as a mode of change. There is something quietly radical about Neel’s figurative works about people who dare to portray the human condition in all its complicated intimacy.

“Alice Neel: People Come First” opens during a moment of enormous humanitarian crisis as Russia continues its invasion of Ukraine. As we see casualty statistics and crowd shots of panic and mass exodus from cities, it can be difficult to contextualize the human cost. It’s never a bad time to have an Alice Neel retrospective, but the past two years have made it particularly urgent to revisit work that focuses on the value of individual lives.