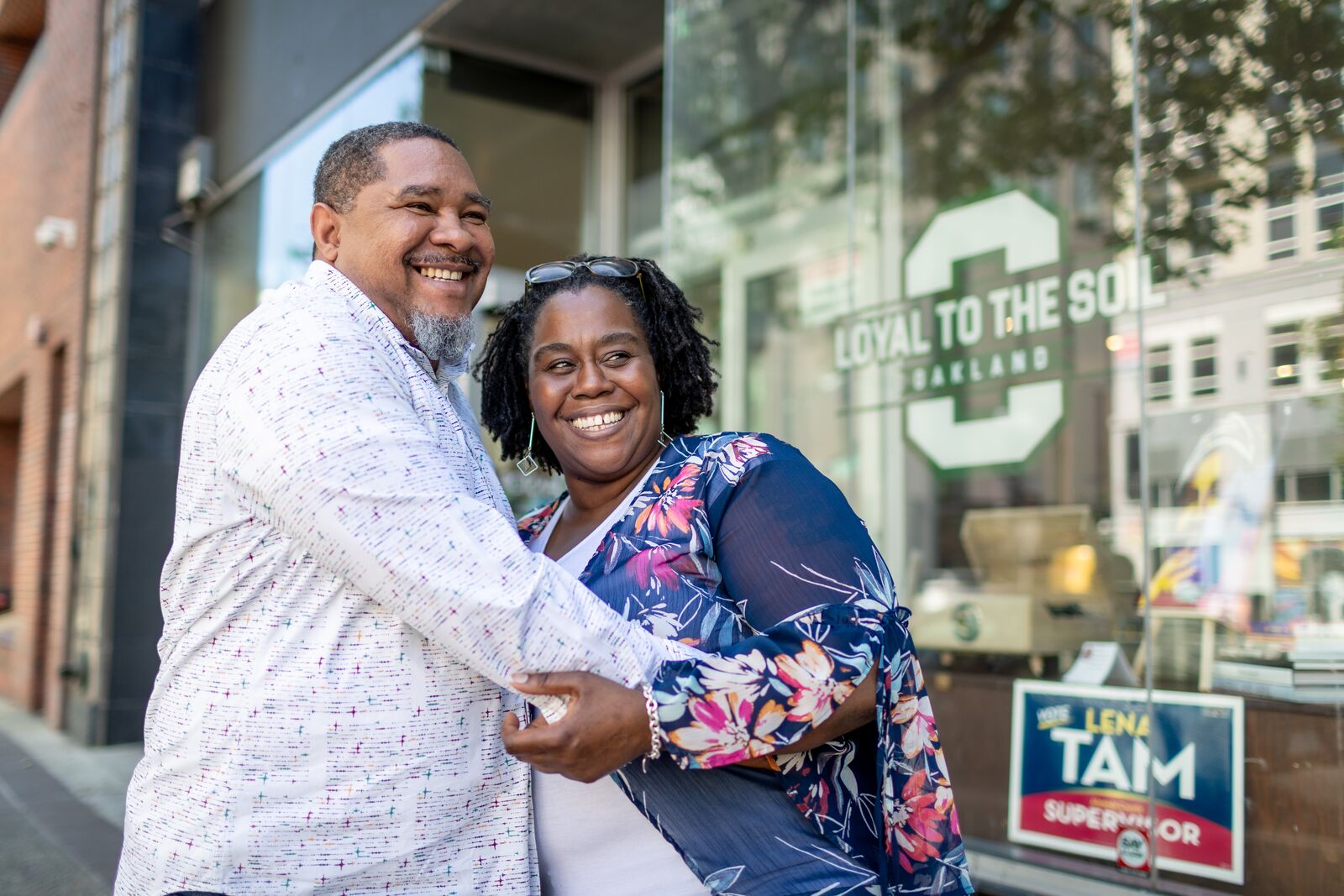 When Oakland natives Michelle Walton and Wesley Dawan first started dating, they often met at one of the bookstores in town. “We would always have coffee or go for cocktails afterwards, and we would discuss the books we were reading separately or together,” Walton said. “And we learned so much from each other through these books.”

Those bookstore dates led to an idea that would eventually become their first joint venture: The Collective Oakland, an online bookstore that opened in fall 2019. The couple initially operated the business from their home, but with the vision of one day having a brick and mortar that could serve not only as a bookstore, but also as a place where people could gather with others to read, share stories and enjoy events.

“Would it be great if people of color read together, or could just enjoy books and coffee and cocktails like we do, you know what I mean?” Walton remembers the couple thinking.

Growing up, Walton regularly attended the Oakland Public Library’s summer program, which to this day encourages children, teens, and adults to read as many books as possible in exchange for prizes. But it wasn’t just the library where Walton cultivated his love for books. Marcus Books near the MacArthur BART station, the oldest bookstore specializing in African American literature, was and still is a Walton favorite. She often bought books at the original location in San Francisco, which closed in 2014.

Understanding that Oakland’s rich culture includes music, dance, and the arts, Walton and Dawan wanted to create a space where all of these worlds, including literature, would collide.

“How about we do more community-focused events? And basically for people like us,” she said. “Because there has to be a stage for people who just like to kick back, relax and rock. Many of them love books.

When it came to launching their online store, Walton and Dawan could only rely on themselves. Walton had to learn about online promotion and how to process orders — and there wasn’t much when The Collective Oakland first launched. But that all changed in the summer of 2020 when the business was featured on Oprah’s website as one of 127 black-owned bookstores in America amplifying the best in literature. The buzz from that exhibit, coupled with increased interest in Black-owned businesses and literature amid widespread protests for racial justice that summer, led to sales growth. Walton and Dawan decided to quit their full-time jobs to just focus on their business and started doing pop-ups, and by 2021 the business was doing so well they were able to donate several hundred pounds to children and families who could not afford to buy them.

As their business thrived, Walton saw other small businesses in Oakland struggling to make ends meet during the early months of the pandemic. She was also keeping tabs on businesses in other parts of the country to see how they were adapting and was inspired by a particular business model in Atlanta run by The Village Market, which acted as a support center for entrepreneurs. black people in this town.

“I was like, we must have something like this here [in Oakland],” she says. “I kind of introduced it to a few people. I didn’t want to do it myself because I was so passionate and in love with our bookstore that I couldn’t run another business.

Eventually, Walton and Dawan reached out to Damon Johnson, executive director of Oakstop Alliance, a nonprofit dedicated to improving access to space for black-led social enterprises and POCs. “I called Damon and said, ‘I want to do a cohort of black entrepreneurs. And I want our bookstore to be the flagship brand. We must have a fighting chance.

In February this year, Walton and Dawan were in talks with Johnson and Trevor Parham, the founder of Oakstop, an affiliated black-owned social enterprise that provides affordable work and event space, as well as other support. local business owners and creatives.

Johnson and Parham invited Walton and Dawan to submit a proposal and it was quickly approved, at which point Walton began to see the couples’ original vision become a reality. “I was just like, ‘Okay, then we’re going to do this,'” she said. “It will happen.”

The couple took over a storefront at 1719 Broadway and began sprucing up the space by painting, stripping old carpet and drawing up their business plan for what is now Loyal to the Soil Collective.

Using the rest of Dawan’s personal savings and the $5,000 the couple had received from the Oakstop-backed Black Business Fund, the showcase opened on April 23, showcasing products from 10 local black-owned businesses.

Members of the collective pay $400 a month to showcase their products at the store for four months, then are replaced by a new cohort of companies who do the same. Revenue from sales goes directly to each business. Additionally, once a company has had a turn in the cohort, it is eligible to rent the space on Broadway for $150 to hold events. The next cohort of Loyal to the Soil companies is expected to start in August.

Walton said the goal is to improve members’ chances of sustaining their business by increasing profits and reducing liabilities. “Working capital is such a hard thing to get,” Walton said. “So if you can get it immediately, you’re making all that money and putting it right back into your business.”

Community events are another part of the collective’s work, which Walton and Dawan are now focusing on. Next up is an adult spelling and play night scheduled for June 24th. Walton also hopes to have Oakland author Leila Mottley, whose new book Crawl was recently selected for Oprah’s Book Club, appearing in stores soon.

“It’s really about focusing on local people, highlighting and amplifying our voices,” she said.

Artist Colette Savage will demonstrate painting and pastels on Tuesday at GO ART!

Chifley loses his pipe in the vandalism of a sculpture