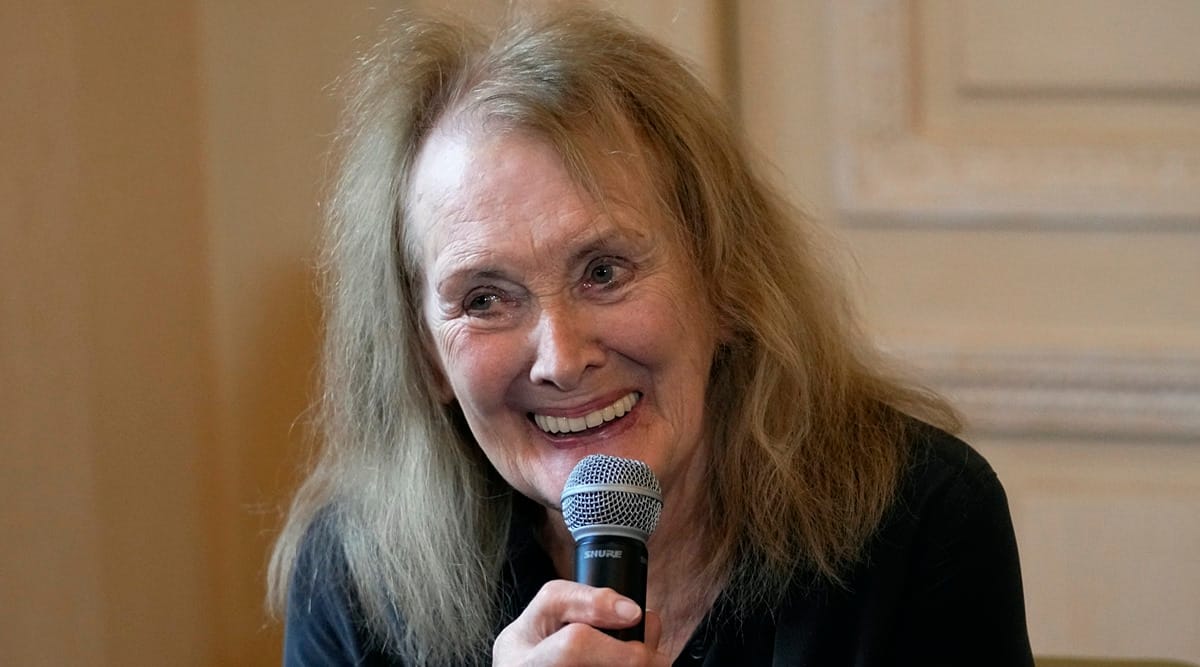 Since Annie Ernaux received the Nobel Prize for Literature last week, the French author’s books have gained enough new admirers that many titles are sold out on Amazon.com and physical bookstores, with some unavailable for a month or more. But at Albertine Books on Manhattan’s Upper East Side, her appearance Monday night felt less like an introduction than a reunion of old friends, French and American.

The event, accessible on the second floor by a spiral staircase within the Cultural Services of the French Embassy, ​​was sold out well before the announcement of the Nobel Prize. On Monday, a first line of attendees spun around the corner, with hundreds eventually packed inside, including an overflowing crowd watching through a video feed from the floor below.

Greeted by a standing ovation from a standing audience of just fellow authors Garth Greenwell and Rachel Kushner, 82-year-old Ernaux spoke at length and at an energetic pace, through her translator, about her career and the process of writing.

The 2022 #Nobel prize literature laureate Annie Ernaux believes in the liberating power of writing. His work is uncompromising and written in simple, uncluttered language. pic.twitter.com/la80uMiSa8

Her expansive responses contrasted with the economical style of her famous short autobiographical books, among them the 64-page “Simple Passion” and the 96-page “Happening”, her heartfelt recollection of having an illegal abortion in 1963 which was adapted the last year in a French-language film of the same name.

The evening was titled “The Art of Capturing Life in Writing”. Ernaux, interviewed by author Kate Zambreno, compared her work to a long-term exploration of her mind, echoing a common sentiment among authors: they write to find out what they think.

“Literature appeared to me as the only way to reach what I call either truth or reality,” she says. “It’s a way of making things clear, not in a simple way — on the contrary, writing things down makes them more complex. It’s also a way of ensuring that until something has been written, it doesn’t really exist.

Raised in the Normandy countryside, Ernaux was hailed by Nobel Prize judges for showing “a great deal of courage and clinical acumen” in revealing “the agony of class experience, describing the shame, the humiliation, jealousy or the inability to see who you are”. Ernaux said Monday evening that her goal was never to write a “beautiful book” or to be part of the literary world that now celebrates her, but to articulate her thoughts and experiences and make them recognizable to others.

RECENT NEWS:
The 2022 #Nobel prize in Literature is awarded to the French author Annie Ernaux “for the courage and clinical acuity with which she discovers the roots, the remoteness and the collective constraints of personal memory”. pic.twitter.com/D9yAvki1LL

Zambreno recalled a moment in “Happening” when Ernaux goes to the library to research abortion but finds no book that mentions it. Ernaux explained that the books had “nourished and nurtured” her since childhood, and that she was as sensitive to what they didn’t include as what they did.

“Happening” itself was something of a fix, and she was confident it would resonate, especially since the U.S. Supreme Court struck down Roe v. Wade last summer. Ernaux remembered her advocacy for the right to abortion, which France legalized in 1975, and her gratitude for the “sorority” of peers with whom she could share her story.

But even the most intimate discussions lacked the lasting power to place words in bound text.

“Years later, after having an abortion, in the 2000s, when I chose to write about what I called an ‘event’ or an ‘event’, people asked me ‘Why do you come back to this? ? “, She said. “And it was because I felt that there was something there that needed to be undone, to be looked at, to be explored. It is only through the narration that this “event” could be considered in this way.