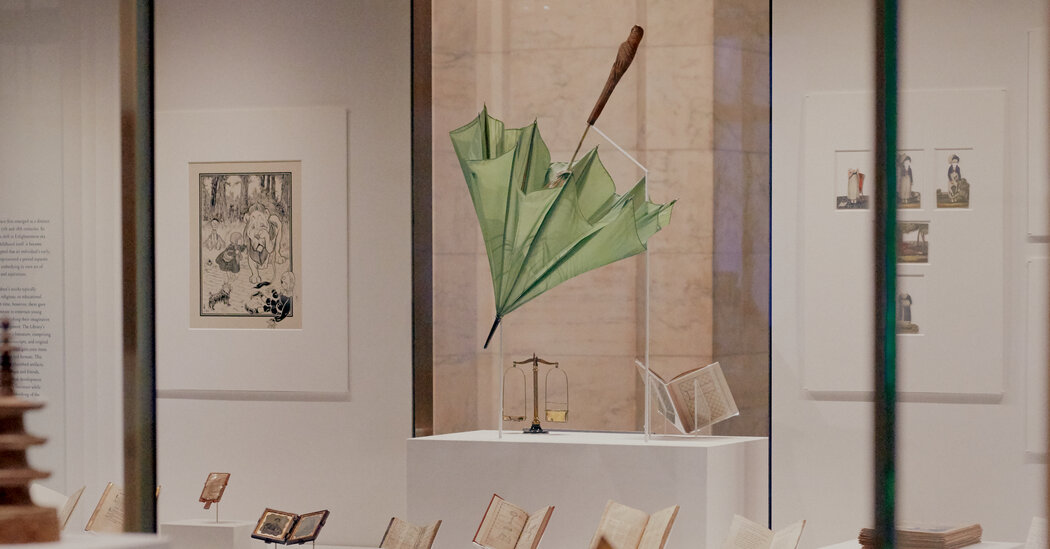 Just behind – in the center of the gallery and the library building itself – is an oversized handwritten copy of the Bill of Rights, one of 14 that George Washington ordered to be made during the ratification debate. It lists 12 amendments, instead of the 10 that were approved.

“It shows that history is not set in stone,” said Anthony Marx, president of the library, who had come down to show a few items. “This is something that is always debated and argued, even as we imagine it.”

The exhibition, free but requiring timed entry tickets, includes cases dedicated to exploration, religion, performance, childhood, visual arts, social activism and other themes, including content will be regularly renewed. There are striking juxtapositions and surprising sightlines, and objects that tell different stories depending on which angle you look at.

Look through an exhibition of conductor Arturo Toscanini’s batons, suspended in space, and you spot a lighted display case through the room containing “Political Prisoner,” a 1971 cedar sculpture by the African-American artist. Elizabeth Catlett. From the front, the figure – a woman with a Pan-African flag cropped across her torso – looks elated, regal. From the back, you see that his hands are chained.

The library, Kiely said, is actually a â€œcollection of collections,â€ whose own history is traced through the show. The main sections are filled with treasures donated by 19th-century philanthropist James Lenox, such as an early 16th-century copper globe that includes one of the earliest cartographic representations of the Americas. (It’s also one of only two Renaissance or medieval cards to survive with the inscription â€œHere be dragons.â€) The New York Public Library, another gift from Lenox, is â€œspecial,â€ because it was the first to come to America, in 1847.

Rodin Bronze From Family Plot goes up for auction