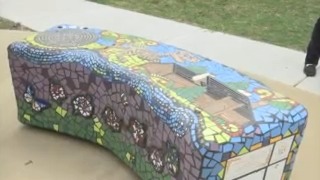 Six benches were unveiled on Saturday afternoon, surrounding the mosaic sculpture that sits outside the Log Lodge at the Riverfront YMCA.

“I think it could be used as a faithful educational piece, where people can not only see the story, they can touch the story,” Burton said.

Some of the benches celebrate the famous women of Stateline. Others represent popular community attractions, such as Beyer Stadium and the Coronado Performing Arts Center. The text of the 19th Amendment, the legislation that officially granted women the right to vote in 1920, is also included.

Elaine Hirschenberger is the director of WomanSpace, the group behind the benches. She says they wanted to honor all of the people and places that have helped advance women’s rights here locally.

“Having women who can break those glass ceilings and have the ability to be influential citizens is really what we hope for and what we work for,” said Hirschenberger. “The fact that we did it with mosaic is important. The whole concept is to take little pieces, as if we are all little pieces of the community. But when we come together, we create an image and a presence that is truly a powerful symbol. “