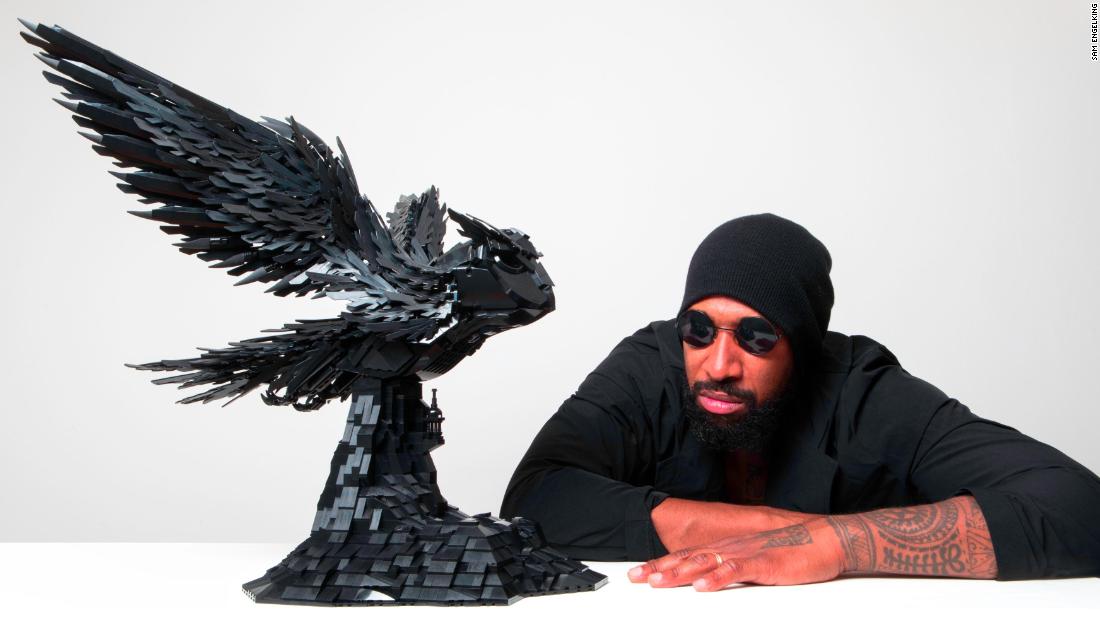 For 42-year-old Ghanaian Canadian artist Ekow Nimako, Lego is more than just a children’s toy. A trickster deity in the form of a spider, a flower girl holding a giant bee, and a Ghanaian kingdom in AD 3020 are all sculptures he built using only black Legos.

“I make art,” Nimako said. “It’s fine art. It’s not a hobby, it’s not a toy, it’s not part of the Lego fandom, it’s not goofy. It doesn’t fit into a lot of categories into which Lego creations fall. “

He started making Lego sculptures in 2012 and his career took off two years later when he received a grant to exhibit his work in Canada during Black History Month. “I started to realize that not only did I love making art with Lego, but it was important that I do black art very specifically,” he said.

Nimako uses black Lego bricks specifically for three main reasons. The first is technical; black is one of the The most common Lego colors, so there are a lot of different pieces available to it.

The second is that he just likes the color. “I think there’s something so fancy, something that’s just expansive in the dark, and then there’s also something dark and sometimes eerie or haunting about black. It has so much spectrum.” , he explained.

However, the most important reason is that the beings he creates are “unequivocally black. Despite their characteristics or what I can do with them, they will always be considered black,” he said.

The bricks of life

In 2014, Nimako produced her first human sculpture, “Flower Girl,” which “speaks of the lost innocence of young black girls who have not had the chance to be like traditional flower girls in the West – speaking to girls who came here because of the transatlantic slave trade, ”he said.

“Flower Girl” was the first human sculpture made by Nimako. Credit: Sam engelking

The sculpture, which is now on tour in the UK, was initially the size of a six-year-old girl, but as its technique developed and more Lego pieces were released it l ‘has aged and improved its aesthetics. She is now the size of an average 10-year-old.

“There is an intrinsic essence of life in my work,” Nimako said. “Sculptures are inanimate plastic objects. There is something quite synthetic about them. But it is this synthetic quality that I strive to transcend with life, (as in) spending a lot of time in. develop the eyes of each sculpture. ”

It takes between 50 and 800 hours to make each sculpture, according to the Lego artist, who is “never in a hurry”. For a sculpture he’s currently working on, he spent two hours building a jaw section, trying to find the right angles and parts, and “still isn’t finished.”

Named “Kadeesa” by his wife, this cat sculpture is inspired by the griffin, a mythological creature that is both lion and eagle, creating what Nimako calls a “griffyx”. Credit: Sam engelking

He expects the building process to lengthen with each work of art as he discovers more Lego pieces and tries new techniques to make his works more dynamic.

“It’s a constant process of evolution,” he said.

“Resistance is rooted in the imagination”

Nimako is a futurist who used around 100,000 Lego pieces to build a reinvention of the medieval kingdom of Ghana, titled “Kumbi Saleh 3020 CE”. Credit: Sam engelking

In his series “Building Black: Civilizations”, Nimako reinvents medieval stories from sub-Saharan Africa. His piece “Kumbi Saleh 3020 CE”, composed of about 100,000 The Lego bricks and can be found in the Aga Khan Museum in Toronto, are named after the capital of a medieval Ghanaian kingdom. The artist explores medieval West Africa and reimagines what it would look like 1,000 years into the future.

Nimako hopes for an “inclusive future” that recognizes the history of anti-black racism and how “totally disruptive” it is, and recognizes the role of Afrofuturism in enabling people to “envision a better world”.

Each sculpture takes between 50 and 800 hours to create, and Nimako expects the construction process to lengthen as he tries out new techniques to make his works more dynamic. Credit: Sam engelking

He recently released kits online for his ‘Building Beyond’ workshop, which helps people imagine and build representations of their own descendants from Lego using face models called ‘heirlooms’. He believes that “it can help foster sensitivity and understanding of complex cultures and ethnic groups.”

His work is recognized beyond the art world, including by Lego itself. A Lego documentary based on his work will also be released in February, according to the artist, who added that “The Lego group has really supported my work. After realizing what I’m doing, there’s so much more we’re going to do together. “

Nimako is currently building a sculpture called “The Great Turtle Race”, which depicts black children running on the backs of two mythological turtles to “capture the essence of childhood.”

“We are black artists when we make art,” he said. “You can’t just exist as an artist. There is so much complexity and so much nuance and so much culture to explore. It fills me so much with joy… knowing that black children are going to be able to engage with my work. and see themselves reflected. “

andrea dragoni completes the extension of the contemplative cemetery in italy

Teen painting depicts a partnership with the police

Opening of the 18th annual sculpture garden this weekend