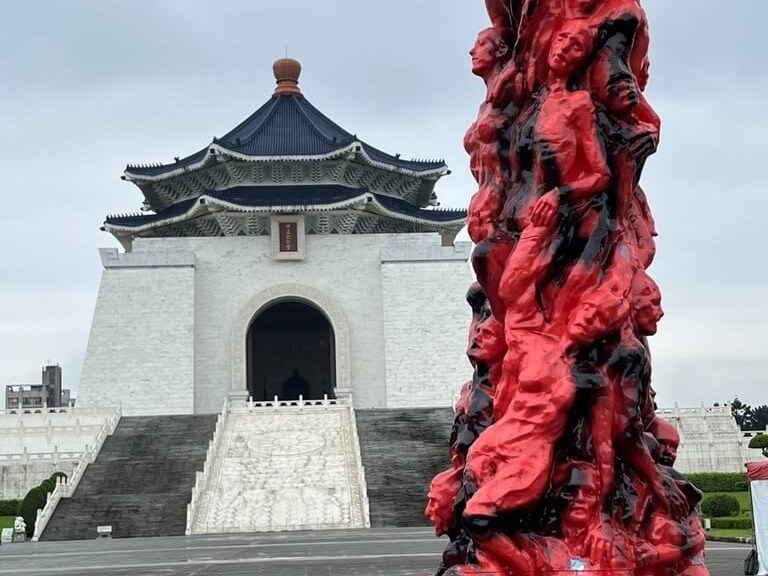 Taipei, June 12 (CNA) A 19-year-old man was arrested on Sunday for spray painting a Taiwanese replica of a monument commemorating the 1989 Tiananmen Square massacre that had been on display since June 4 in Freedom Square in downtown Taipei.

The man surnamed Lee (李) told police he vandalized the sculpture to express his anger at the financial hardship and general hardship he was facing due to the COVID-19 pandemic.

The Taipei-based New School for Democracy, which built the sculpture – a replica of the Pillar of Shame – through a fundraising campaign condemned the act and demanded those responsible be held accountable.

The group reported the matter to a police station in Taipei’s Zhongshan District around 9:30 a.m. and about six hours later police arrested Lee, who was caught on surveillance camera painting the sculpture, according to the police.

Lee confessed to his involvement in the case and blamed it on anger over hardships due to the COVID-19 pandemic, police say.

According to their initial findings, police said Lee had previously violated the Maintenance of Social Order Act but was not affiliated with any political party or criminal gang, without providing further details.

However, Tseng Chien-yuan (曾建元), the group’s chairman, was unconvinced, saying it was not the first time that people had set out to sabotage the annual commemoration of the Tiananmen Square Massacre.

In the past, event organizers have reported similar acts of vandalism to police, which were then treated as an expression of free speech and treated as civil matters settled in private, Tseng noted.

The acts are important, however, as they could deter Taiwanese from highlighting the Tiananmen Square incident and the problems facing the Chinese Communist Party.

“Once the Taiwanese stop talking, no one in the Chinese community will talk,” Tseng said.

He believes the acts of vandalism are being led by someone behind the scenes and urged the government to find out who that person is “so that the spiritual freedom of Taiwanese people is not threatened.”

The Taipei artwork is inspired by the Pillar of Shame, a series of sculptures by Danish artist Jens Galschiøt commemorating the loss of life during specific events in history.

An eight-meter-tall sculpture commemorating the victims of the 1997 Tiananmen Square crackdown at the University of Hong Kong was dismantled and removed on December 22, 2021 as part of a wider crackdown on democracy and symbols anti-Chinese in Hong Kong.

Authorized by Galschiøt, the Taipei-based group built a replica of the Pillar of Shame and unveiled it on June 4 at a memorial vigil in Taipei on the 33rd anniversary of the Tiananmen Square Massacre, said Tseng.

Chifley loses his pipe in the vandalism of a sculpture