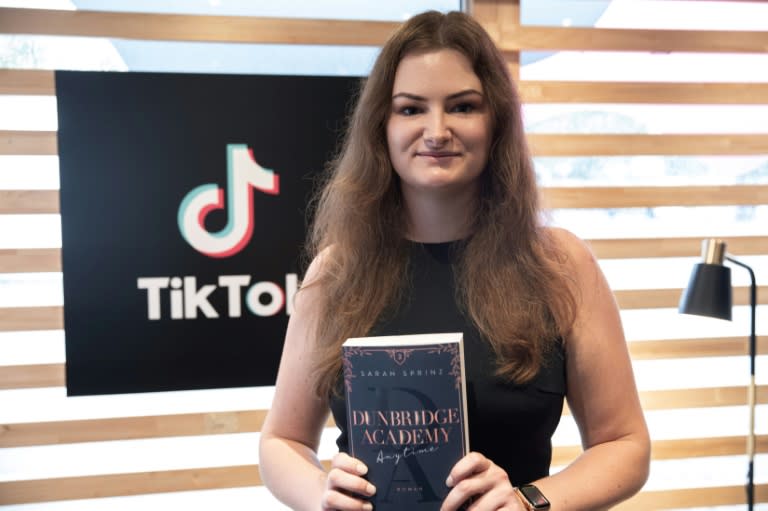 Best-selling German author Sarah Sprinz’s series of young adult books has received a boost from an unlikely side: a community of literature enthusiasts on the social media platform TikTok.

The #BookTok trend has exploded lately, with an increasing number of readers posting reviews and engaging with writers, while authors are using it to promote their works.

To some, this seems counterintuitive — a platform known for its short, often light-hearted videos isn’t the obvious place to encourage an activity like reading that requires deep concentration.

But videos with the hashtag are racking up billions of views, and have helped boost the popularity of some books, as bookstores rush to set up booths where creators can film videos.

The trend “is super important to me,” Sprinz, author of the hit series “Dunbridge Academy,” which takes place at a boarding school in Scotland, told AFP during an interview at the Frankfurt Book Fair.

“Personally for me, I believe that played a role (in my success) because I saw a lot of videos recommending my books.”

“I think it’s good that thanks to TikTok, a completely new and younger target audience is becoming aware of reading,” the 26-year-old said.

According to TikTok – which is owned by Chinese company ByteDance – #BookTok has received over 84 billion video views so far on the platform, and hit genres include romance and fantasy.

“#BookTok has become the place for book recommendations and discoveries, as well as for sharing reviews and tapping into fan culture,” said Tobias Henning, Managing Director, TikTok Germany and Central and Eastern Europe.

It “also has a real impact on book sales around the world,” he added.

One success attributed to #BookTok is American author Colleen Hoover’s novel ‘It Ends With Us’, which saw sales skyrocket after gaining traction in the community.

A typical review shows a woman sobbing as she reads the novel, with music and a voiceover reading, “I’ve never cried so long after a book.”

With #BookTok’s growing influence, the annual Frankfurt Fair, the world’s largest publishing event, made TikTok a partner for the first time.

“I do mostly (Tiktok) content on books, mostly novels, and I try to upload two videos a week,” TikTok user Sofia Reinbold, who came to the office, told AFP. living room after reading on the platform.

The 17-year-old added that she had received “comments from people who bought books after watching my videos”.

For Sprinz, the #BookTok phenomenon is driven by the fact that TikTok is a visual platform, allowing people to show what they think of a book.

And people stuck at home during the coronavirus pandemic may have accelerated the trend.

“A lot of people maybe felt a bit lonely and isolated,” she said, adding that it was a good platform “to network again and find common hobbies like reading.”

She also played down the suggestion that there was somehow a contradiction between spending more time on social media and trying to promote literature, noting that people read in different ways these days, including on e-books. and smartphones.

“TikTok and #BookTok are kind of a multiplier and a good opportunity to pass on book recommendations.”

But “there must be more than that,” she said. “The book must of course be good.”

Soup on the van Gogh: the painting is fine, and the children are fine