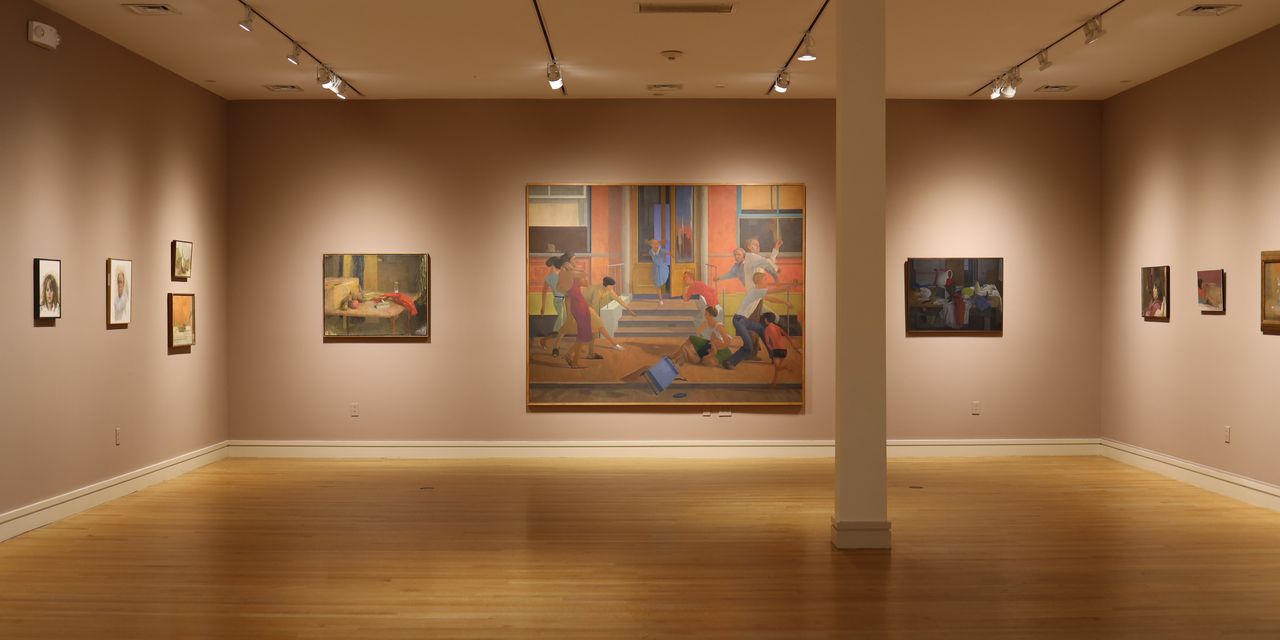 ‘Lennart Anderson: A Retrospective’ Review: Tutorial on an Unsung Painter

Art critic Hilton Kramer called the late 20th-century American realist painter Lennart Anderson (1928-2015) “the Degas of our time”. Another great fan and collector of Anderson’s paintings calls him “the Chardin of America”. These French masters were undoubtedly important to Anderson, as were the Roman frescoes, Piero della Francesca, Poussin, Ingres, Corot, Puvis de Chavannes and Balthus, as well as the psychologically charged portraits of Anderson’s teacher, Edwin Dickinson. The influence of these earlier painters, flashing here and there like family traits throughout Anderson’s oeuvre, shines through in “Lennart Anderson: A Retrospective”, a fine exhibition (curated by Amaya Gurpide and Jordan Sokol) of more than 30 oil paintings and drawings here. at the Lyme Academy of Fine Arts.

Born in Detroit, Anderson studied at the Art Institute of Chicago, Cranbrook Academy in Bloomfield Hills, Michigan, and the Art Students League of New York. A painter (and professor at Brooklyn College, Columbia, Pratt, Princeton, and Yale), Anderson is deeply admired but relatively unknown beyond artistic circles. That’s why it’s fitting but somewhat discouraging that this show is making the rounds in colleges. It opened, in a very different, scruffier, fuller setup, at the New York Studio School, where Anderson also taught; and in June he traveled to the Southern Utah Museum of Art at Southern Utah University. I am delighted to see that he continues to inspire student artists, but this retrospective, the first since his death, should be much larger and make the headlines of major museums.

Anderson, hugely talented and idiosyncratic, explored a handful of idioms. His work was variable, disorderly, uneven. Besides the traditional genres of portraiture, still life, landscape and interior, Anderson produced Bacchanals and Idylls – an ambitious series of paintings of mythical landscapes with animals, gods, goddesses, bathers, dancers and nymphs. It depicts street scenes with accidents and, in 1951, a man falling from the sky, about to hit the sidewalk.

The Lyme retrospective, while self-contained, does not offer a full range of Anderson’s passions, fantasies, and eccentricities. It primarily features Anderson’s portraits, which make him appear more conventional and unimaginative than he actually was. Many here, extremely strong, express the immediacy, frontal presence and unique personalities found in early Roman Fayum mummy portraits. Most, like “Morris Dorsky” (1990-91) and “Portrait of Jeanette” (1995), like Byzantine Madonnas, explore the tension between a solid, fully realized head and its mostly flat, neutral-colored surroundings. “Portrait of Mrs. Suzy Peterson” (1959), reminiscent of Renaissance portraiture, is monumental, but emits a soft, milky light. In “Portrait of Barbara S. (the First)” (1972), the sitter’s eyes hover just above center, as if struggling to hold our gaze and keep her head above water.

Also included in Lyme are some nudes; a handful of wonderful still lifes; two striking and luminous small landscapes, “Patmos” (1959) and “Motecastello di Vibio” (1990), which summon Corot; and the large, multi-character narrative tableau “Street Scene” (1961). A rich range of warm, heightened oranges, salmons, ochres, limes, pinks and blues, it depicts deployment reactions to an accident involving a child and his broken toy cart. Radiant with summer heat, the painting recalls, through color, drama and organized chaos, “The Abduction of the Sabines” by Poussin (c. 1633-1634), at the Metropolitan Museum of Art in New York. The wounded boy and a servicewoman (a pocket of calm) suggest a pietà; and a girl, her blond pigtails flapping like angel wings, pops up like a superheroine. The numerous figures of the painting, as if suspended, collide, fall, tumble and tumble, as if abandoned, in the air, by a juggler.

For me, however, the most compelling images here are Anderson’s still lifes, which unfold like dramatic narratives. In one, from 1993, the tiny, crumpled, shiny foil facets of a bag of Jiffy Pop popcorn are mesmerizing, as is its ripped opening – gaping like a hellhole. In “Still Life With Mannequin (Admiration)” (1997), an articulated wooden studio dummy of an artist looks upwards at a fragment of a plaster bust, possibly an ancient Roman goddess emerging from her tomb . She leans toward us, while the prone dummy, like a fallen warrior, leans inward. Their gazes, like passing ships, miss each other, a palpable void in their wake. It is a humble, beautiful and melancholic painting, painted by “America’s Chardin”.

-Sir. Esplund, the author of “The Art of Looking: How to Read Modern and Contemporary Art” (Basic Books), writes about art for the Journal.