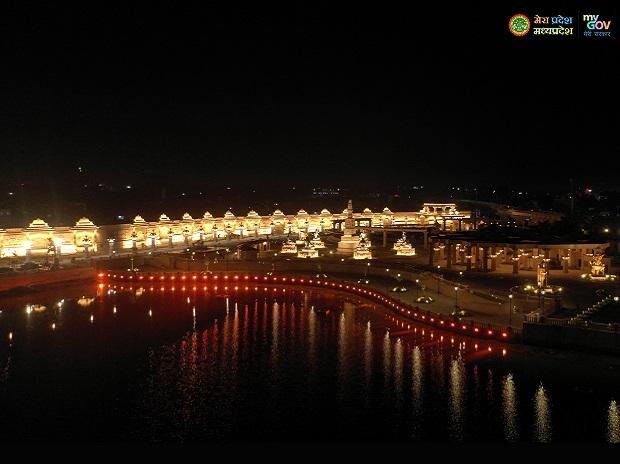 Large entrance doors, heritage architecture: the many facets of the “Mahakal Lok”

Two grand gates and a majestic colonnade of 108 ornate intricately carved sandstone pillars, gushing fountains and a panel of over 50 murals illustrating stories from Shiv Puran are among the main highlights of the soon-to-open ‘Mahakal Lok’ in Ujjain .

The over 900 meter long corridor — ‘Mahakal Lok’ — billed as one of the largest such corridors in India bypasses the ancient Rudrasagar Lake which has also been revived as part of the redevelopment project around of the old Mahakaleshwar temple, one of the 12 “jyotirlings” of the country which receives devotees throughout the year.

Two majestic gates – Nandi Dwar and Pinaki Dwar – separated by a short distance, have been erected near the starting point of the corridor, which winds its way to the entrance of the ancient temple and offers aesthetic views along the way.

Sandstone from the Bansi Paharpur region of Rajasthan has been used to build structures that populate the corridor. Artists and craftsmen mainly from Rajasthan, Gujarat and Orissa worked to chisel and embellish rough stones into aesthetic pillars and panels, a senior official associated with the project from its inception told PTI.

Madhya Pradesh government sources said the ambitious project which started in 2017 aims to ‘underline and re-evok the ancient glory of the historic city of Ujjain’ through the use of ancient temple architecture. while providing all amenities to visitors and using the latest technology to enhance its physical and cultural value.

So while 108 pillars with ornamental elements on top bearing a trishul-style design dot the hallway at regular intervals, CCTV cameras and a sound system have been seamlessly integrated into it, they said.

The public address system will be used to make announcements for crowd management and to play devotional songs once the hallway is open to the public.

In addition, an integrated command and control center has been set up to monitor the security arrangements in the temple corridor complex.

Ujjain Smart City General Manager Ashish Kumar Pathak said that Ujjain is an ancient and holy city and ancient Hindu texts describe the presence of a “Mahakal Van” around the Mahakaleshwar temple there are eons.

“The project cannot restore that antiquity of centuries ago, but we have attempted to re-evoking that glory through ancient aesthetic architecture used in the construction of pillars and other structures in the hallway, as well as species horticultural plants mentioned in the Abhigyan Shakuntalam of Kalidas planted in the corridor.

“So around 40 to 45 of these species with religious significance were used including rudraksh, bakul, kadam, belpatra, saptaparni,” he told PTI.

Ujjain, located on the banks of the ancient Kshipra River, is an ancient city that was previously also known as Ujjainy and Avantika, and associated with the legend of King Vikramaditya.

The Mahakaleshwar temple is considered one of the holiest places on earth by Hindus, and thousands of people converge here from all parts of the country during the Shravan month of the Hindu calendar or Mahashivratri, in addition to the Simhasth Kumbh which takes place every 12 years. The Kumbh in Ujjain was last held in 2016.

“The Nag Chandreshwar temple in Ujjain only opens once a year on Nagpanchami, and a massive crowd visits it during this time. The town grows in population during these festive times and this has also helped the economy.

“Therefore, the Mahakal Temple is not only a religious center of Ujjain, but is also linked to the social, cultural and economic spheres of the city,” Pathak said.

The CEO of Ujjain Smart City, which is implementing the project, believes that after the corridor is opened, people’s current excitement will only increase and lead to a “huge jump” in tourist traffic.

“Ornate columns, aesthetic fountains and depictions of various elements of Shiv Puran in the murals will enhance the experience of viewers,” he said.

The mega project after its completion will expand the area of ​​the temple complex from 2.87 ha previously to 47 ha, and the retention capacity will be significantly improved, officials said.

“In the corridor, a section of 24 m has been laid out, separated in the middle by a row of 108 pillars also surmounted by lampposts. The left half, 12 m wide, is reserved for pedestrians, and the other part of 12 m adjacent at the wall bearing 53 murals is intended for the circulation of electric vehicles (11-seater golf cars), ambulances and fire engines, which would all be parked inside the corridor.

“An emergency gate has been constructed near the Nandi Dwar for the movement of large vehicles as needed,” said Amit Gupta, urban infrastructure and tourism manager at the project consultancy.

The pedestrian part is paved with stones on the ground. The corridor project also includes a huge pavilion – Triveni Mandapam, a gushing fountain with a sculpture of Lord Shiva in the center, and other fountains adjoining Rudrasagar Lake. About 190 sculptures, showing various forms of Lord Shiva and other deities, dot the lakeside of the corridor, he said.

The ‘Mahakal Lok’ development also includes a midway area, a park, a multi-storey parking lot for cars and buses, a flower shop and other shops, solar lighting, a facility center for pilgrims, a water pipe and a sewer pipe, among other works.

A light and sound system has also been developed and work on phase two of the project is currently underway.

(Only the title and image of this report may have been edited by Business Standard staff; the rest of the content is auto-generated from a syndicated feed.)

Second part of the Meetings of Cities of Literature 2022