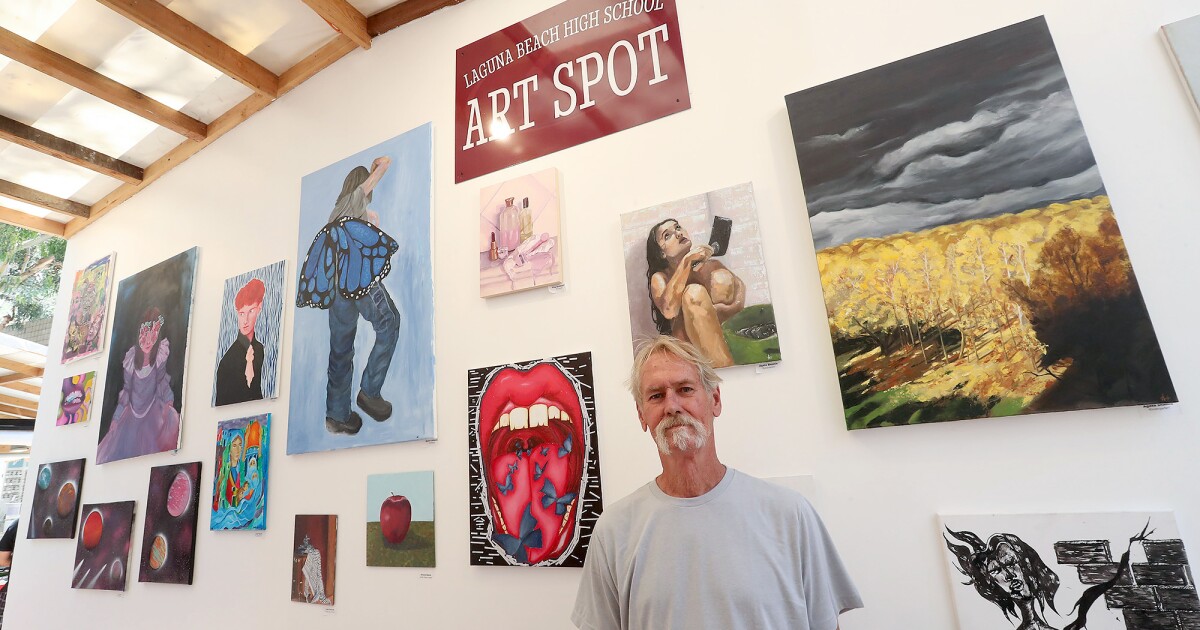 The tradition is passed down from one generation to the next, and with the Sawdust Art Festival in its 56th year, there’s sure to be plenty.

For those new to the festival, however, they may have stumbled upon an unfamiliar space called the Laguna Beach High School Art Spot.

Such a space existed on the festival grounds years ago, but it has been abandoned. This year, however, the high school students again have a dedicated exhibition to showcase their work.

Installing a high school stand on the grounds is a development that longtime Sawdust artist Bud Weir has seen come to fruition during his two previous stints as a board member. of the festival.

“The reason I did it is because Laguna Beach is an art town and there are a lot of really good artists in high school,” Weir said. “Again, it was in place for three years and then they let it go.

“The reason I did it this time was [because] the first time and the second time we did it, some of the high school artists ended up being exhibitors at the show, and there are actually a few exhibitors now… [who] were originally displayed in high school newsstands. So it really excited me to be able to help kids like that.

Weir said it has been nearly 15 years since the high school booth last appeared at Sawdust Festival. This summer, it features the works of 23 Laguna Beach High students.

“We want to thank our amazing VAPA [Visual and Performing Arts] teachers and the Sawdust Festival team for the opportunity to collaborate and showcase the talent of these young artists,” said the Laguna Beach Unified School District superintendent. Jason Viloria said in a statement. “We are proud of our exceptional artistic program at LBUSD and any chance to showcase the talent of our students.”

The students worked with a variety of media to produce the exhibit, including ceramics, oil paint, photography and sculpture.

Agata Shamis, a rising elder who immigrated from Russia as a young girl, became reflective in her oil painting titled “Reminiscent.” A woman gazes up at the sky as she bathes with a pan. Shamis noted that this was only his second endeavor with oil painting.

“The [AP Art and 2D Design] The portfolio focuses on my experience as a Russian immigrant in the United States,” said Shamis, who added that she started creating art during the coronavirus pandemic. “It specifically focuses on the coldness and desperation of living in Russia and how people live there because I still have family there, and it’s very, very sad.

“This painting is precisely reminiscent of a moment. We often turn off our hot water, and especially in winter, it’s a very desperate time, so when the hot water is turned off, sometimes it feels like it’s deadly, so the emotion is desperation.

Recent graduate Zoe Gort has produced some of the most unique pieces, with carvings centered around the lips, teeth and tongue. It was the kind of quirky creativity that felt right at home with the Sawdust Festival, a place where Gort grew up.

One piece featured these human parts on the body of a donut. Gort noted that painting and sculpting kept her in touch with her “inner child”, granting her license to explore her freedom of expression and creativity.

“As far as the donut goes, … I just think it’s kind of fun to give inanimate objects personalities,” said Gort, who will be heading to Cal State Monterey Bay in the fall. “Even though the donut doesn’t have eyes or a face or anything else, you can still tell if it’s a person, it would probably be a funny person – at least funny .”

Support our coverage by becoming a digital subscriber.