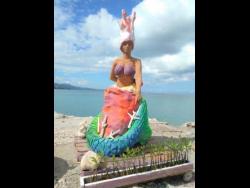 Since the unveiling of Montego Bay’s latest waterfront attraction, a mermaid statue, several Christians have expressed disgust at what they have described as an ungodly act.

They say the artwork is a demonic symbol and an invitation to evoke sea spirits in the region and the country at large.

As the announcement, which followed the saga over cult pastor Kevin Smith, permeated social media, many condemned it as a recipe for further supernatural disasters.

Referring to the two occurrences, one user wrote, “I feel like Jamaica is getting into something the outcome of which they won’t like for many years to come. I have noticed that spiritual wickedness is at its highest in this country…”

Some have even blamed the statue for the Montego Bay flood tragedy that claimed the life of a 12-year-old child months after it was erected.

However, unbeknownst to many, the artist behind the disputed sculpture is a self-proclaimed God-fearing Christian, who he says takes his vows to the Creator seriously.

Dismissing accusations made by his colleagues, creative ecologist Robert ‘Toby’ Grant said the gleaner that he is only a messenger.

“It wasn’t my idea to create a mermaid sculpture, but it was my partner and I (Smilo Zone) who wanted to make the world’s first ever environmental underwater sculpture. It was requested by the Montego Bay Marine Park, based on a comic they created,” he said.

Grant explained that the book is about a colony of mermaids, who decided to send a few of them to become humans, in order to shed light on the high level of pollution of sea life.

According to him, the interpretation of the sculptures goes beyond what many may believe.

“Many may say the sculpture represents a demonic nature, but to me it is a simple depiction of using a human form with sea life, similar to how most people use personification. mermaid is depicted with her left hand pointing down, in a gun-like gesture. Her right hand is then folded behind her, with a mirror held up,” he said, adding that he s This is a depiction of the gun violence that has plagued the city for many years.

He continued, “The downward-spinning gun finger represents seized fire and peace. The mirror represents a level of introspection and reconciliation.

In addition to its symbolic meaning, the sculpture, which was created using crushed glass, sand and cement, will also be submerged within the boundaries of the marine park to protect coral reefs.

Responding further to those who criticized the work, Grant said, “I’m just a messenger. Christ speaks in parables, and they are earthly stories with heavenly meanings. Revelation speaks of the Lamb of God with the Lion, the seven horns and the heads, and people consider him to be demonic. It’s not, it’s just a message.

“It’s called ‘personification’, telling a story using different elements in human forms and creatures. That’s how they make superheroes, how Christians still go to movies and watch… I don’t love it, it’s just a piece of art that conveys a message.