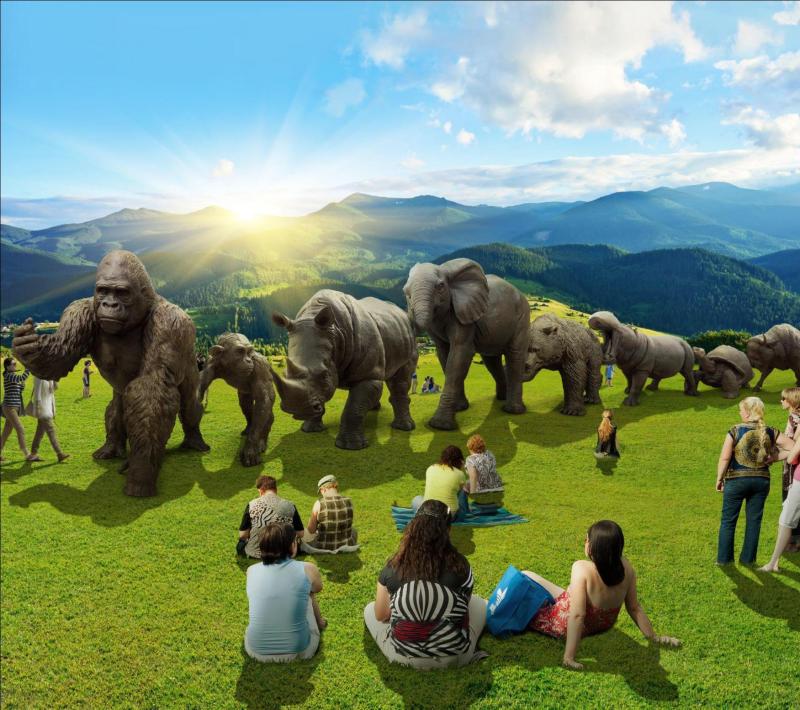 Internationally renowned artists, Gillie and Marc are back

SINGAPORE, May 25, 2022 (GLOBE NEWSWIRE) — On National Endangered Species Day 2023 (19and May), Singapore will host the the largest sculpture in the world – I love The Last March. Meandering through the acclaimed horticultural attraction, Gardens by the Bay; a total of 45 of the world’s most endangered species, led by a great mountain gorilla, will parade together. Representing the largest animal march on planet Earth, it aims to raise awareness of the massive rate of wildlife extinction and help save the animal kingdom. Internationally renowned artists, Gillie and Marc are back with their biggest sculpture yet. Well known for their monumental public wildlife sculptures such as The Last Three for the Northern White Rhino and King Nyani for the Gorillas, they have been raising awareness of wildlife through their art for decades.

Why are they walking? They march for solidarity. They march for power. And they march to change things. They saw how a march can revolutionize our society; Gandhi’s Salt March in 1930, the March on Washington in 1963 and the March for Science in 2017, to name but a few.

In 2023 there will be another march, perhaps the most important of all. But this walk is a little different – it’s the first of its kind; it is a wildlife walk.

They explain their inspiration for this project:

“Usually when we create a public sculpture for wildlife, we focus on one animal per project. But the rate of extinction is increasing at a terrifying rate. We wanted to show the magnitude of this problem, also raising awareness of the overarching problem .as highlighting individual species.” – Gillie and Marc, Artists.

Based on photographs and sketches they collected over their years of studying wildlife and animals such as the mountain gorilla, giraffe, giant panda, and northern hairy-nosed wombat, each is brought to life in striking detail.

Today people are living in the 6th mass extinction of wild animals. According to a 2020 report from the World Wildlife Fund (WWF), the world has lost 68% of its wildlife in just four decades. They lose between 200 and 2,000 different species every year, which is between 1,000 and 10,000 times the natural rate of extinction. 1 million species are threatened with extinction due to habitat loss, or about 85% of all wildlife.

Another sobering study published in 2021 in the journal Frontiers in Forests and Global Change, found that less than 3% of the world’s ecosystems are intact, with minimal habitat destruction and loss of native species.

This is clearly a huge problem.

“Extinction can often be a silent event, especially for those of us who live in urban environments, away from wildlife. We knew we had to do something really big to show how big this was. This question deserves the largest sculpture in the world,” Gillie shares.

At a whopping 192 meters in length, this exhibition of sculptures is massive. By comparison, the next tallest sculpture, the Statue of Unity in India, measures 182 meters. The Statue of Liberty is 46 meters tall.

Love The Last March is no ordinary sculpture exhibition. It was designed to be interactive. As they walk past each animal, the public will be able to scan QR codes that will take them to an informative webpage so they can learn more about the animal behind the sculpture. Here they can learn more about his behavior, what he likes to eat and, above all, why he is threatened.

“We believe that no one will care about something they have never experienced. Our public sculptures are therefore designed to give them an unforgettable experience with wildlife. By creating a hyper-realistic sculpture, they can touch and study up close, combined with all the facts about the animal, we create a connection that they may never have made. And with that intimate personal connection comes the beginnings of a conservationist,” says Marc.

Another highlight of this exhibit is its chosen location. Despite being the third most densely populated place in the world, Singapore is also a metropolis of nature and has found a way to create harmony between the urban and the natural. As such, Gillie and Marc are very excited about this collaboration with Gardens by the Bay Singapore, a stunning 101 hectare nature park in the central region of the country.

“Surrounded by more than 1,500,000 plants, this explosion of nature and diversity in the heart of a booming urban city shows what can be possible if the planet is a priority and shows that it is possible to live with rather than against nature.” – Gillie and Mark

“Gardens by the Bay was founded on the principles of sustainability and sustainable practices – for example, the use of renewable energy is integrated into our daily operations. In the gardens there are various exhibits that explain these green practices, not only to drive home the importance of action by individuals and organizations to fight climate change, but to educate visitors about key environmental issues facing the world, such as the sixth extinction. Collaborating with Gillie and Marc on a meaningful project like Love The Last March aligns with our vision of connecting people with nature – installing dramatic sculptures amidst the verdant beauty of the gardens amplifies the message of how wildlife is threatened with extinction caused by climate change.” – CEO Felix Loh, CEO of Gardens by The Bay

In partnership with WWF-Singapore, the public also has the opportunity to have a direct impact on the lives of these animals by viewing the sculpture. With links to a donations page, they can make a tangible difference by supporting one of the most respected and influential wildlife charities in the world.

But Love The Last March has another strong point to make it a truly unforgettable experience. By downloading an app and scanning a QR code, the sculpture comes to life with 3D animation. Through their screens, visitors will be able to see the animals leap out of their static bronze bodies and begin their walk, giving the impression that they are really there, walking together for their lives.

“Love The Last March will be the most significant sculpture we have ever created, so we had to make it unforgettable. We hope that with the addition of augmented reality, people will be even more inspired to walking alongside animals, joining the movement to protect the world’s precious creatures,” adds Gillie.

Love The Last March will open on the 19thand May 2023 to celebrate National Endangered Species Day. It will be on display at Singapore Gardens by the Bay until 18and May 2024.

About Love The Last

Love The Last is a social movement driven by public art to raise awareness, fund and support some of the world’s most endangered species. Monumental artists, Gillie and Marc, want to create sculptures all over the world that tell the story of these endangered species to drive positive change and ensure these animals don’t leave us forever. By bringing these animals into urban environments, he sends a message that is hard to ignore. Artists are committed to creating sturdy, eye-catching works of art designed to be touched, climbed and photographed. When people interact with the artwork it is the first step towards loving these animals and if people can love these endangered animals they can start caring for them and act now to stop their extinction.

About Gillie and Marc

Gillie and Marc have been called “the most successful and prolific creators of public art in New York City history” by The New York Times. Creating some of the most innovative public sculptures in the world, Gillie and Marc are redefining what public art should be, spreading messages of love, equality and conservation around the world. Gillie and Marc believe that art is a powerful platform for change. Their art is multidisciplinary, paying homage to the importance of unity, as well as the magnificence of the natural world and the need to preserve it – because we are, and we are.

For more information on the press release, please contact:

THE SOURCE: Gillie and Mark