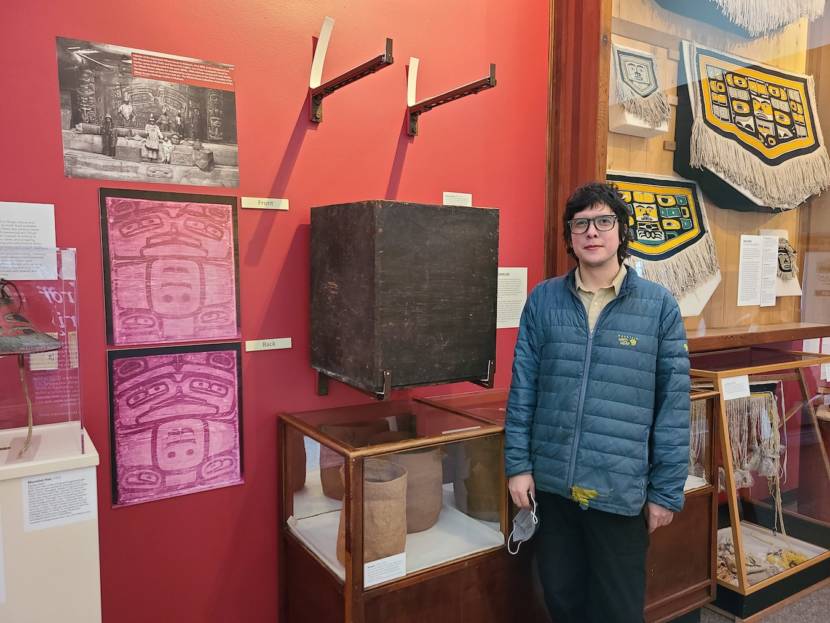 
Several traditional Lingit bentwood boxes are part of the Haines Sheldon Museum’s collection of 23,000 objects. Handcrafted from cedar wood and painted, the boxes were used for storage or traded goods, according to the museum’s collections coordinator Zachary James.

â€œThese, I think, were probably used for the badges because they have really nice paintings on them,â€ James said. â€œBut they were also general purpose storage boxes. “

James is Lingit, with ancestors in Wrangell and the Stikine Basin as well as the Chilkat Valley. And he is actively interested in LingÃ­t art and heritage, especially new ways of looking at the pieces in the museum’s collection.

And recently, he used an infrared camera to photograph the traditional bentwood boxes, revealing paintings that hadn’t been seen for perhaps 200 years.

â€œIt basically looks like a black surface on wood and then these amazing images can be pulled out of it,â€ he said.

Over time, the exterior varnish darkened, possibly due to soot or grime and storage conditions obscuring the original paintings. Some paintings were completely hidden. On others, you can see a slight outline.

Using an infrared lens on a digital camera, James photographed the bentwood boxes, which date back to the 1800s, capturing the striking images of the shape line below.

James says he got the idea for the book The Transforming Image: Painted Arts of Northwest Coast First Nations, a project of the University of British Columbia museum. The book features infrared photographs of many boxes and paintings of different shaped lines from the Northwest Coast.

“Things like killer whales, eagles, crows and frogs and things like that usually belong to a specific house or clan, so things with those kinds of designs weren’t usually traded between other people. “James said. â€œSo they were doing these abstract designs, and that way it was okay to trade them between different people or use them for resale basically. It was before the adoption of currency or the fundamentally colonial culture or something like that western culture with money.

For James, it was an exciting revelation.

â€œThis is probably the first time in a few hundred years that these drawings and works of art have even been able to be appreciated or viewed. So I felt like it was good to see him again.

Haines Sheldon Museum Board Chair Kelleen Adams said James’ initiative and the project were valuable to the Haines community.

â€œIt’s such a treasure to have this in Haines,â€ Adams said. â€œAnd for Zach to have that idea, to bring this piece of art to life, to show people what’s been going on underneath for hundreds of years, it’s amazing. So we are very fortunate to be able to witness this.

James says the recently revealed designs are important to the larger Lingit Heritage Recovery and Protection Project of the Chilkat Valley and Southeast Alaska.

â€œConsistently, Indigenous art has been taken out of Indigenous hands and placed in European or American institutions. I mean, there’s Lingit art from this valley in Russia and Germany and everywhere, also at the University of Pennsylvania, â€James said.

â€œWe have no idea what is in private hands, what has been lost over the years,â€ James said. “So every bit of information about the Lingit art forms that we can draw from is important.”

Formline involves a complex and often subtle language of rules and patterns, so James says the recovered images are important for local Lingit artists to study the art form.

The exhibition is part of the museum’s â€œSix Week Spotlightâ€ and will be on display until mid-December. Entrance is free for residents of Haines. Otherwise it’s $ 10, and the museum is open Wednesday to Saturday from 10 a.m. to 4 p.m.