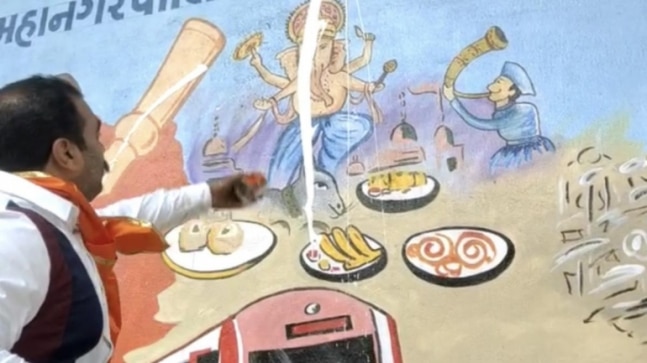 Workers from two Hindu outfits painted over the painting of Lord Ganesha on a toilet wall in Surat, Gujarat and warned the authorities against hurting religious feelings.

Hindu outfits Vishwa Hindu Parishad and Bajrang Dal protested against a painting of Lord Ganesha in Gujarat on Monday. The painting was done on the wall of a public pay toilet at Kapodra Crossing in Surat.

Activists from both organizations painted the picture and warned authorities against hurting religious feelings. They also waved slogans against the Surat Municipal Corporation for ordering the paint work on the toilets.

Activists have warned authorities against such paintings of deities on public toilets as they hurt religious feelings.

Kamlesh Kayada, the City Secretary of Vishwa Hindu Parishad, said, “Surat Municipal Corporation should know that putting an image of any deity on this type of building is tantamount to hurting religious feelings. They must be careful when awarding contract work.

BMI’s Wave In Festival Brings Art, Literature and Music to Las Vegas This May