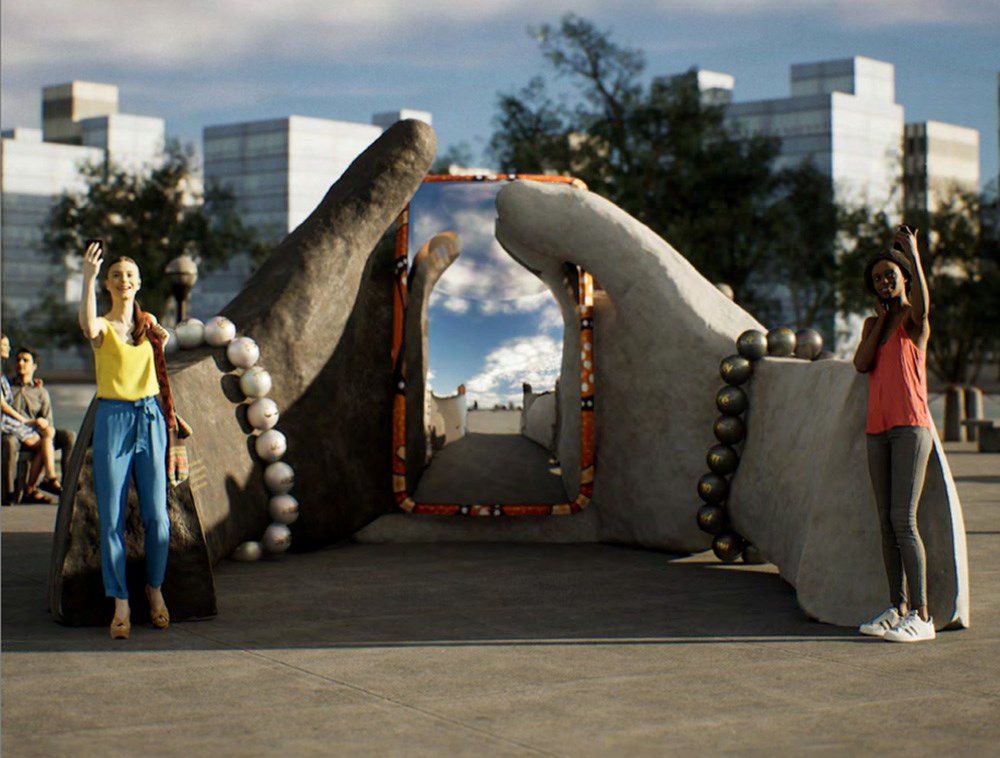 A Vancouver filmmaker and sculptor proposes to present a unique piece of public art that addresses the issue of racism in Port Moody. They just need a place to set it up.

A giant pair of concrete hands – one black, one white – clutching a mirrored cell phone could become a tourist attraction for Port Moody, as self-portraits with the sculpture are shared on the internet.

One of the artists involved in the project is also hoping it will spark conversations about racism.

But whether the 3.7m long by 2m high structure finds a place in the city, or where it could be located, will be discussed at a future council meeting.

On Tuesday, the full council committee voted to forward Vancouver filmmaker Mustafa Keshvari and sculptor Parvenah Roudgar’s public art proposal to one of its regular meetings for further consideration.

Keshvari, whose film projects often explore social themes and issues such as climate change, told advisers he wanted to create something that is more inviting for interaction and gives people the opportunity to reflect on a anti-racist message. Working with Roudgar, whose outdoor sculptures are permanently placed in cities around the world – including one called “Mother and Child on Bikes” at Inlet SkyTrain station – they designed the Giant Hands.

The oversized mirror cell phone they grab, he said, reflects society’s obsession with social media while also inviting people to see their own reaction to the artwork.

The biracial nature of the hands, along with the beaded metal bracelets around each wrist, with the word “Unity” engraved in multiple languages ​​on each bead, sends a message of racial harmony, he added.

“We are all in the same boat, we are all part of the same family.”

Keshvari said he was working with local conservator Fred Soofi to secure funding to build the sculpture at no cost to the city. He just needs a place to put it.

And although he said he has had preliminary discussions with the City of Vancouver, he would like to see him in Port Moody as he moves to the city in November and that could further bolster his reputation as a “City of the Arts” at one. wider audience.

“There is a lot of abstract art in Port Moody, but we need something that is more relevant to current issues,” he said. “We also need to create some kind of tourism. “

Com. Zoe Royer, who is also chair of the arts committee at Port Moody’s, said she would love to see the sculpture located in Rocky Point Park, where visitors to the popular waterfront destination are sure to congregate and to interact with it.

“It will stop people in their tracks,” she said. “It will be captured on many platforms and people will be talking about the conversations we want them to have.”

Com. Amy Lubik suggested that placing the sculpture somewhere along historic Clarke Street or in Queen Street Square would help bring people to those parts of town.

But Con. Hunter Madsen, who brought forward the motion to bring Keshvari’s proposal to a future council meeting, questioned whether a sculpture goes far enough to solve a significant problem like racism.

“I am not convinced that making this symbolic gesture would make our community less racist,” he said. “It makes us think we got it.”

Madsen said all city funds used to install the sculpture could be better spent bringing in speakers and thought leaders, or creating projects with local First Nations.

Keshvari said he envisions the back of the mirrored cell phone being decorated by a First Nations artist and the sculpture could reach far more people than a series of lectures or workshops.

“Art speaks louder,” he says. “Sometimes, through art, we find ourselves. We can create something that allows people to draw their own conclusions.