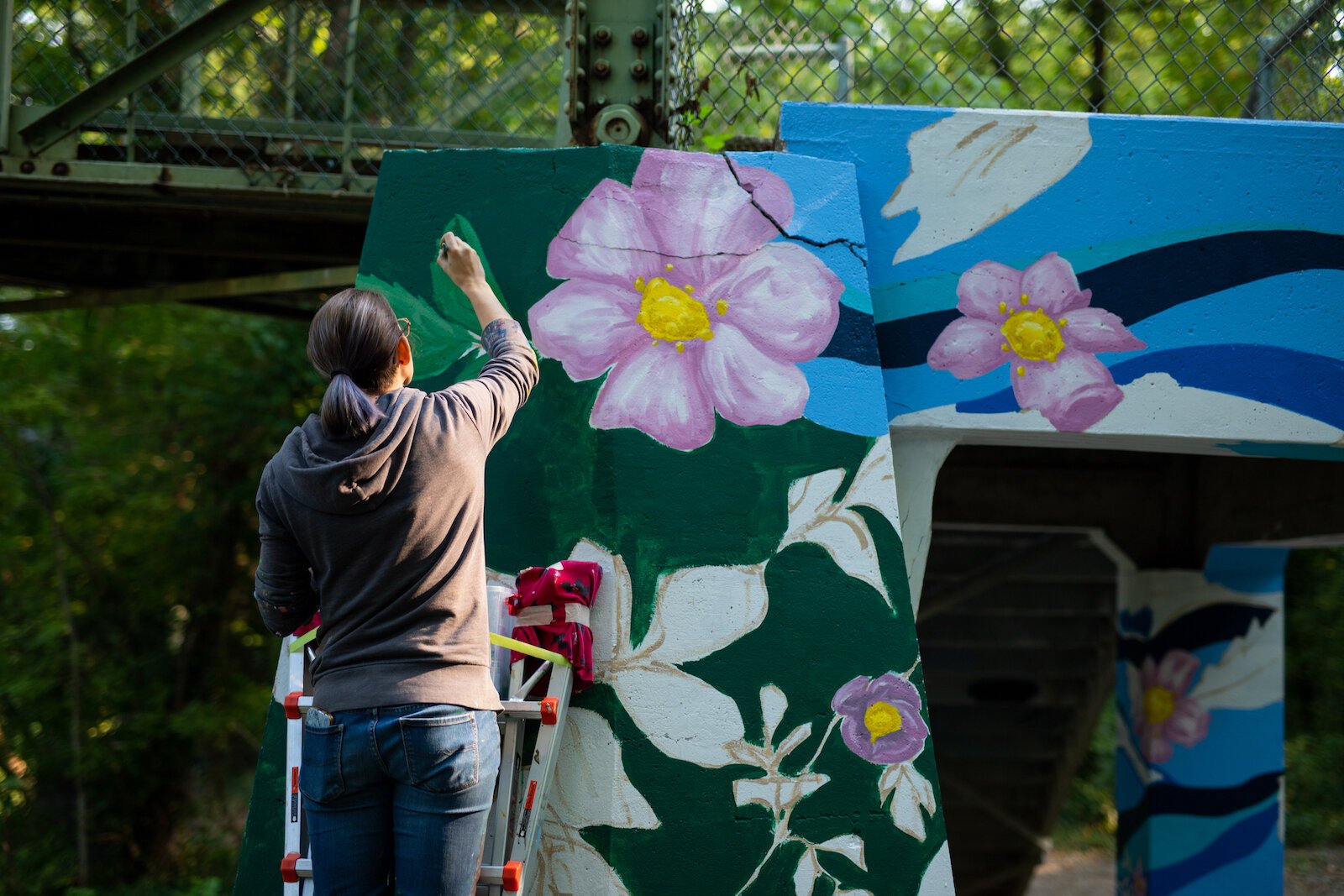 For most of the year, the Foster Park Hanging Walkway that spans the St. Marys River is hidden by a dense canopy of trees.

Built in 1920, the riveted steel towers of the bridge are supported by massive concrete footings. Now, thanks to Fort Wayne artist Suzanne “Suzi” Rhee, those drab soles have become an immersive, shady riverside mural, featuring native plants and animals. 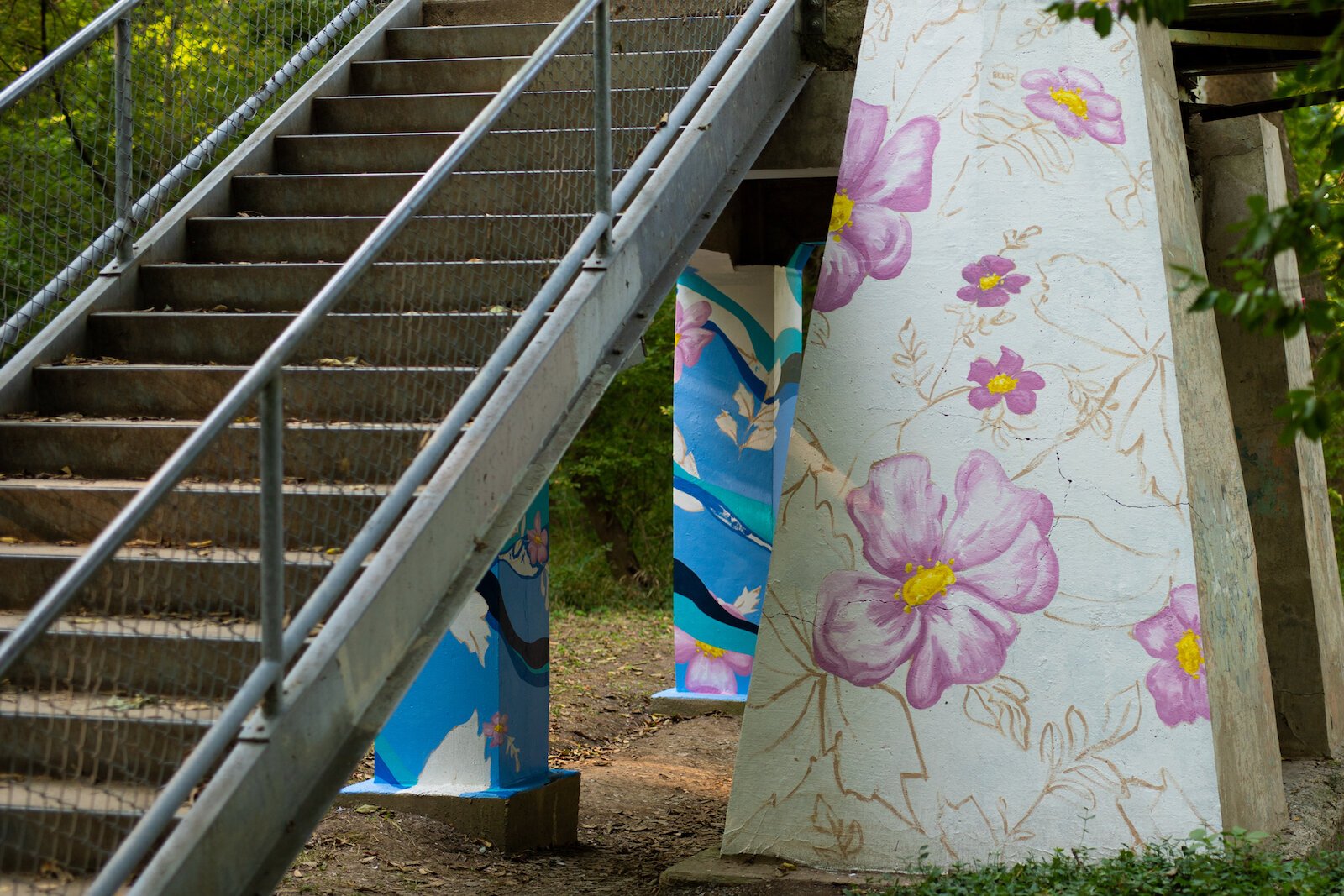 This year, Rhee raised donations from 24 families, individuals and community partners to make her first publicly funded mural near her home. Born in Fort Wayne, Rhee currently resides in the historic Fairmount district, just a few blocks from Foster Park. But over the years, she has struggled to break into the city’s public art scene.

Recently that has changed thanks to some exciting opportunities.

Earlier this summer, Rhee took part in the “Elevation” event at Fort Wayne Open Walls (@fortwayneopenwalls), an innovative rotating outdoor wall gallery in the southeast of the city, where she painted a temporary band-style mural. drawn. She also participated in the regional Make It Your Own Mural festival in 2020. 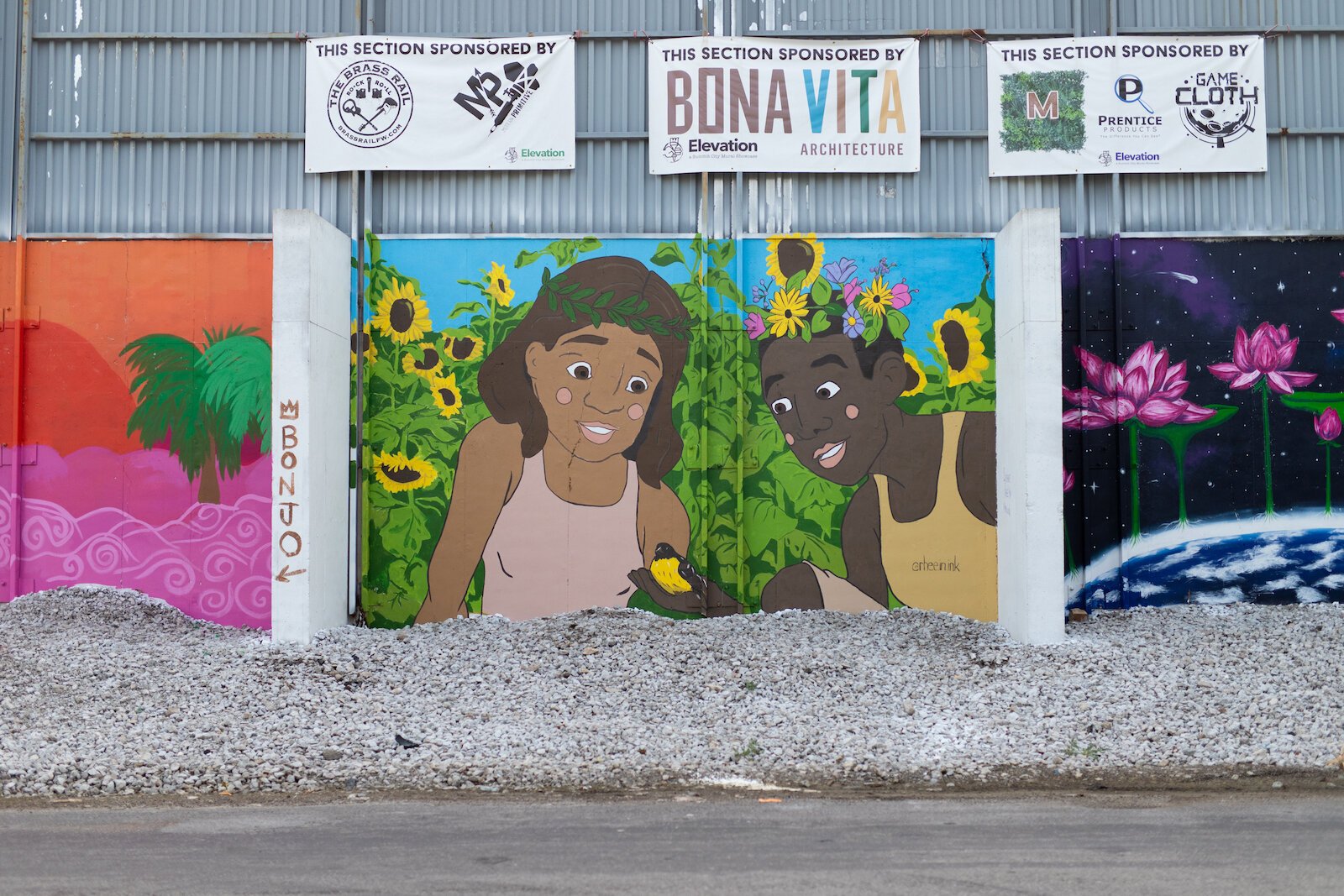 We caught up with Rhee to learn more about her experience breaking into the Fort Wayne public art scene and her hopes for the future.

Suzanne Rhee lives near her mural in Foster Park.

IFW: How long have you been painting?

RS: You could say 12 years ago. You could also say last year. I loved acrylic painting in high school, but it’s like a flipped switch in college. I stopped using color and just wanted to work with pens and ink. Much of my artistic expression has come from comics. I slowly began to incorporate colorful watercolor style inks into my art practice during this time. But I would never have called myself a painter. 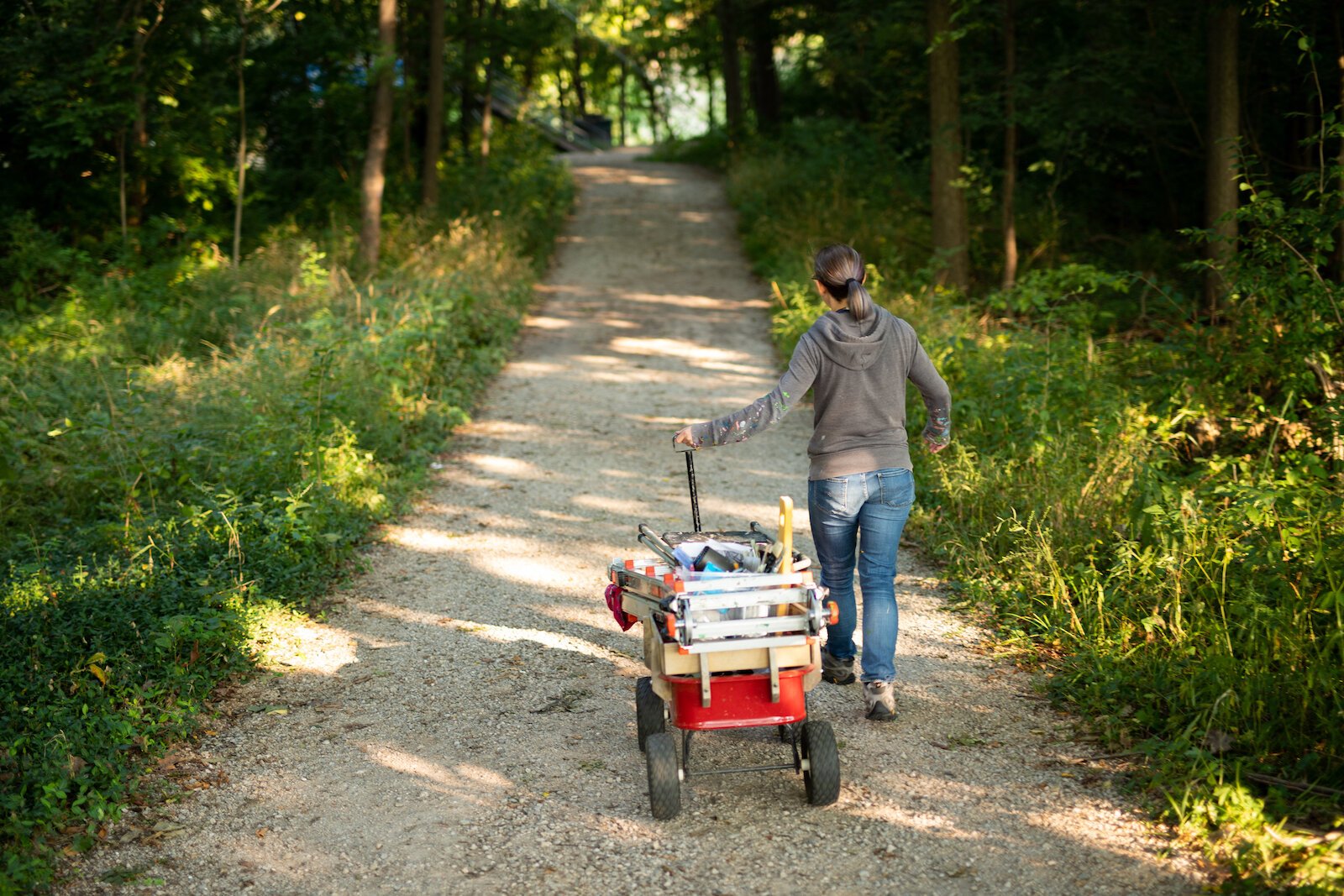 After earning an MFA in Creative Writing in August 2020, I applied on a whim to participate in a mural project in Columbia City as part of the Make It Your Own Mural Fest. Being able to pick up a brush and help a professional artist do something – and have them believe in me throughout that process – has changed my life.

As if by a miracle, the switch turned back on. Now I paint all the time and wish I hadn’t stopped. 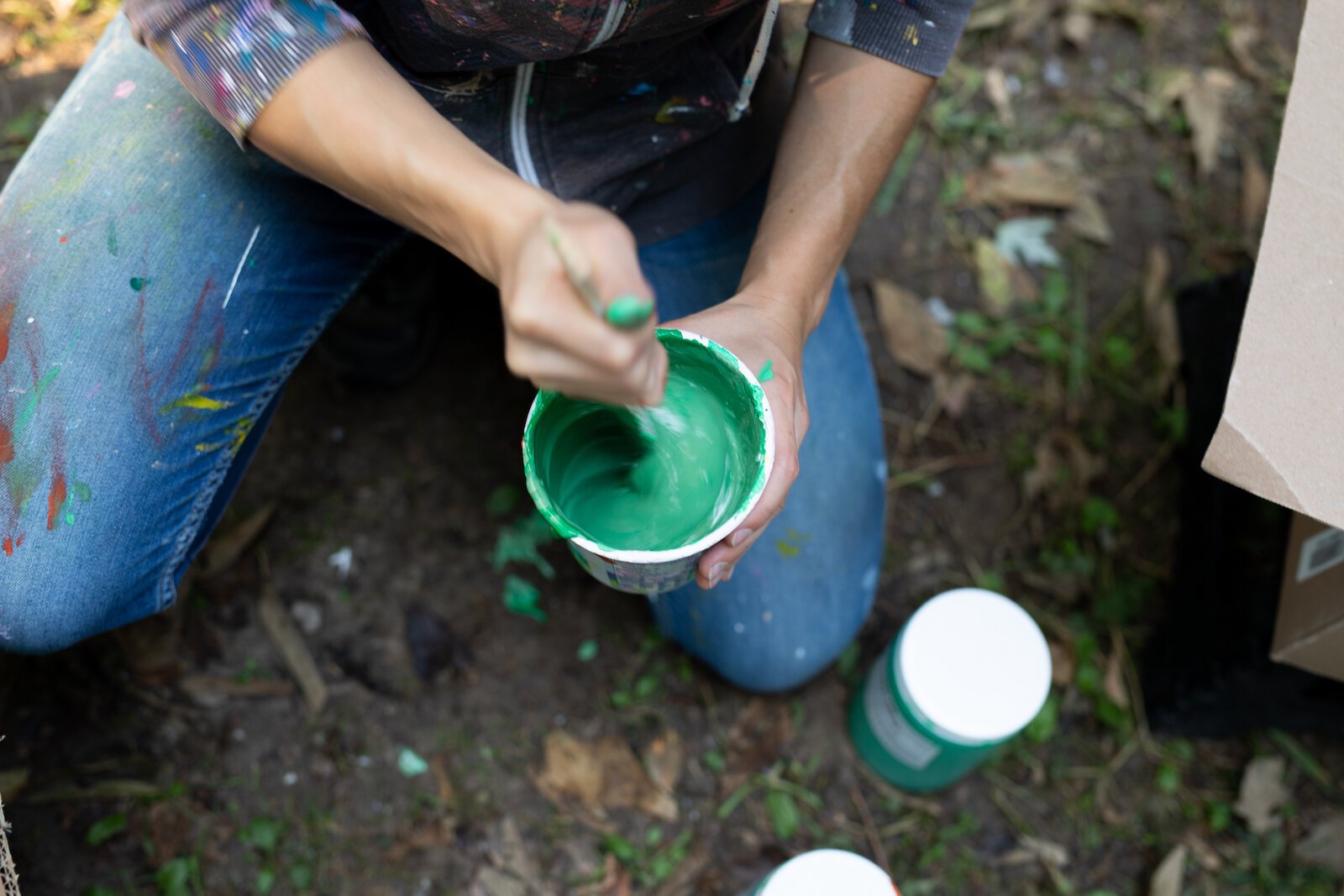 IFW: What inspired your design for the fresco in Foster Park?

RS: I got a lot of inspiration from Juuri’s Lion Dance fresco in the city center. She has a formula of a subject + a botany + symbolic extras that she somehow makes very captivating. I wanted to test this formula and add my own stylistic touch to it. 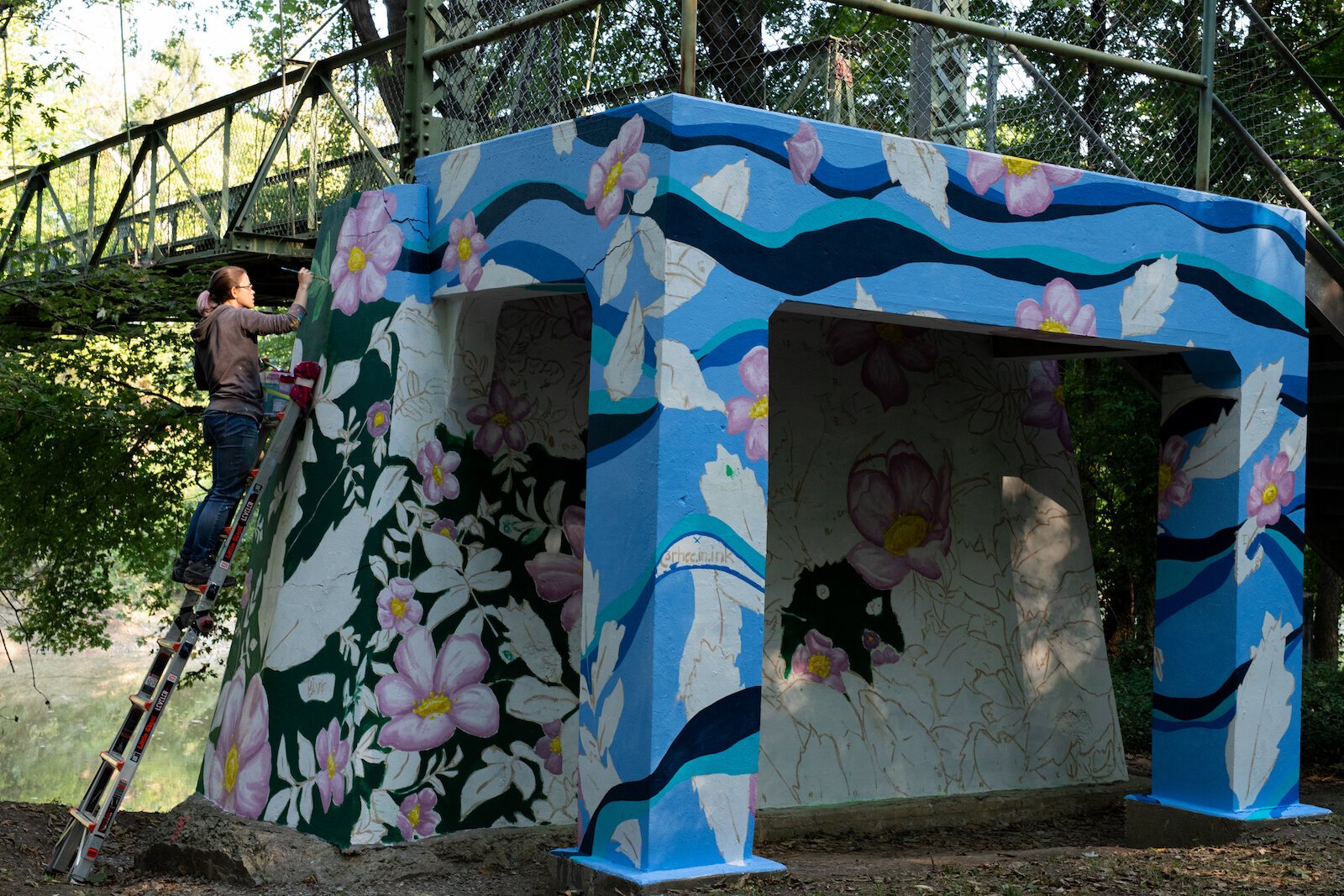 Much of the design was inspired by the RFP guidelines. They asked for something that took into account flora and fauna, as well as rivers. The blues are symbolic of rivers, but they also serve to grab the attention of the main hiking trail while the greens of the native wild roses blend into the surrounding woods. Gray foxes are also native to the area, and the paintable structure looked a bit like a den, so this animal was a great option to use as a subject! 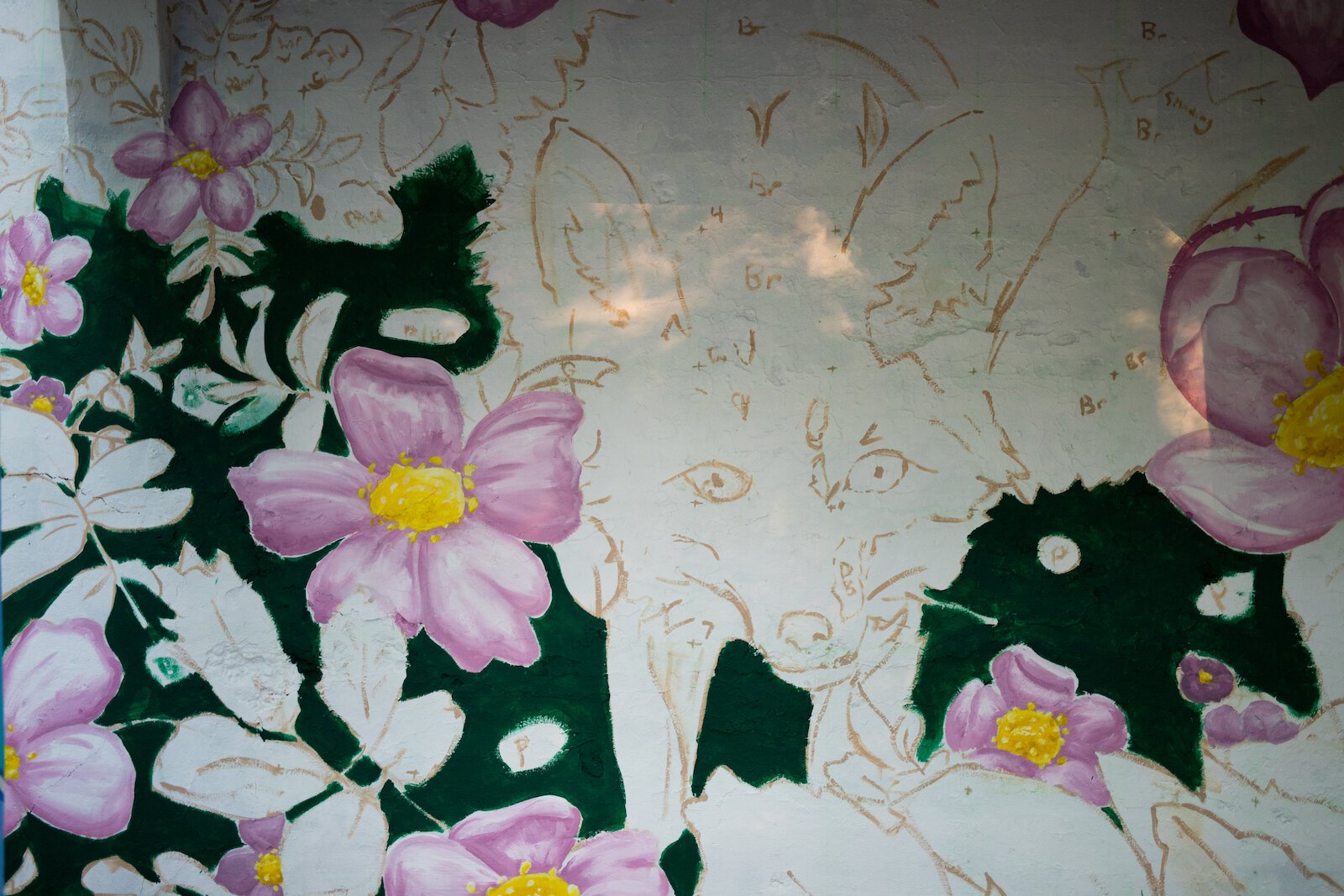 IFW: Your Foster Park project was not your only mural this summer. What was it like to participate in the Open Walls project?

RS: HOT. But really, it was great. Francisco, the organizer, really went out of his way to achieve amazing paint colors, make sure artists were fed and cared for, and even hooked us up to a generator so a few artists could project the outlines of their paintings. murals on the wall before time.

It was my first big public wall, and knowing that other designers believed in me and wanted me to have this space was so empowering. It was like a giant step towards entering the Fort Wayne creative community, which I had tried to do in the past without success.

I was a little silly and didn’t want to ask for help with this painting, but some friends stepped in and helped for a few hours anyway, and we did it in three days. Painting is hard physical labor, but the fatigue is offset by the feeling of accomplishment as you step back and see that boring wall turn into something vibrant and invigorating.

IFW: Tell us about your Open Walls room.

RS: I originally submitted this design for the Jefferson Pointe mural competition, but I think it belongs better here. I love nature: The countless leaves, petals and branches. Especially during the pandemic, nature was an escape for me as well as a source of peace. I wanted to capture that feeling that brings life with this piece. There is so much joy and abundance in the little things if we take the time.

The comic book style that I have developed over the last few years has integrated very well into my way of painting now.

IFW: What are you currently working on?

RS: All! I just finished my fresco at Foster Park. I have a short comic that will be released in a zine in October (tidbitzine.com will eventually be where you can find it). Then there are several mural projects that are in various stages of engagement. The next guaranteed project is a small indoor mural with the Forest Park Primary School. I have several pet portrait commissions that I need to catch up with in early summer. And in my spare time, I slowly write two graphic novels. 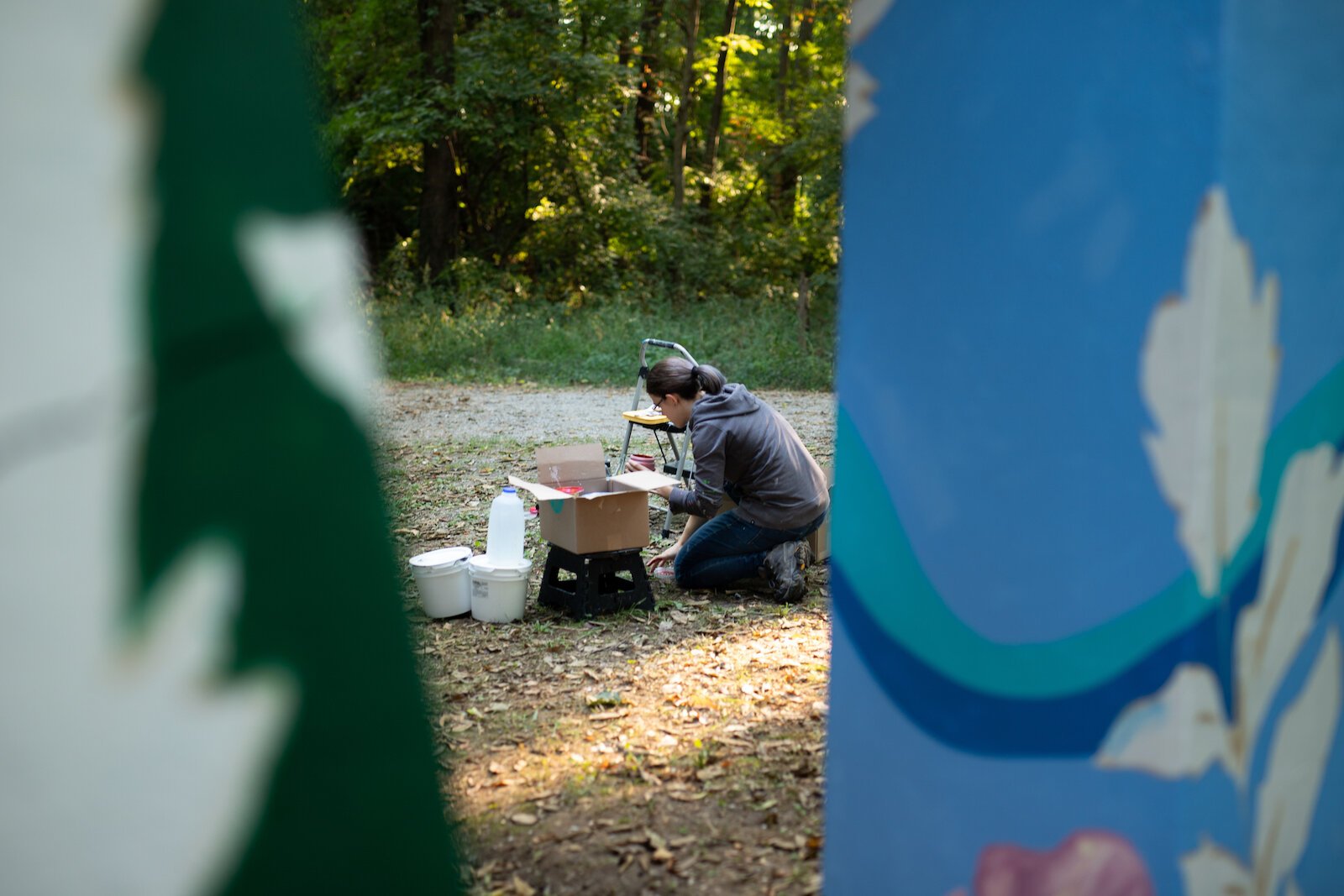 IFW: What advice would you give to an aspiring muralist?

RS: It depends on the person, but in general I encourage you, as an aspiring muralist, to be proactive in finding opportunities rather than just waiting for contests. Tell everyone you meet that you do murals. Courier companies that you think would suit your style. Prepare to hear a lot of ‘no’s’, but don’t give up hope for the ‘yes’ that comes.

In the meantime, take advantage of opportunities like Fort Wayne Open Walls to train and develop your portfolio. Even if you only have two colors of paint, that’s enough to get started. 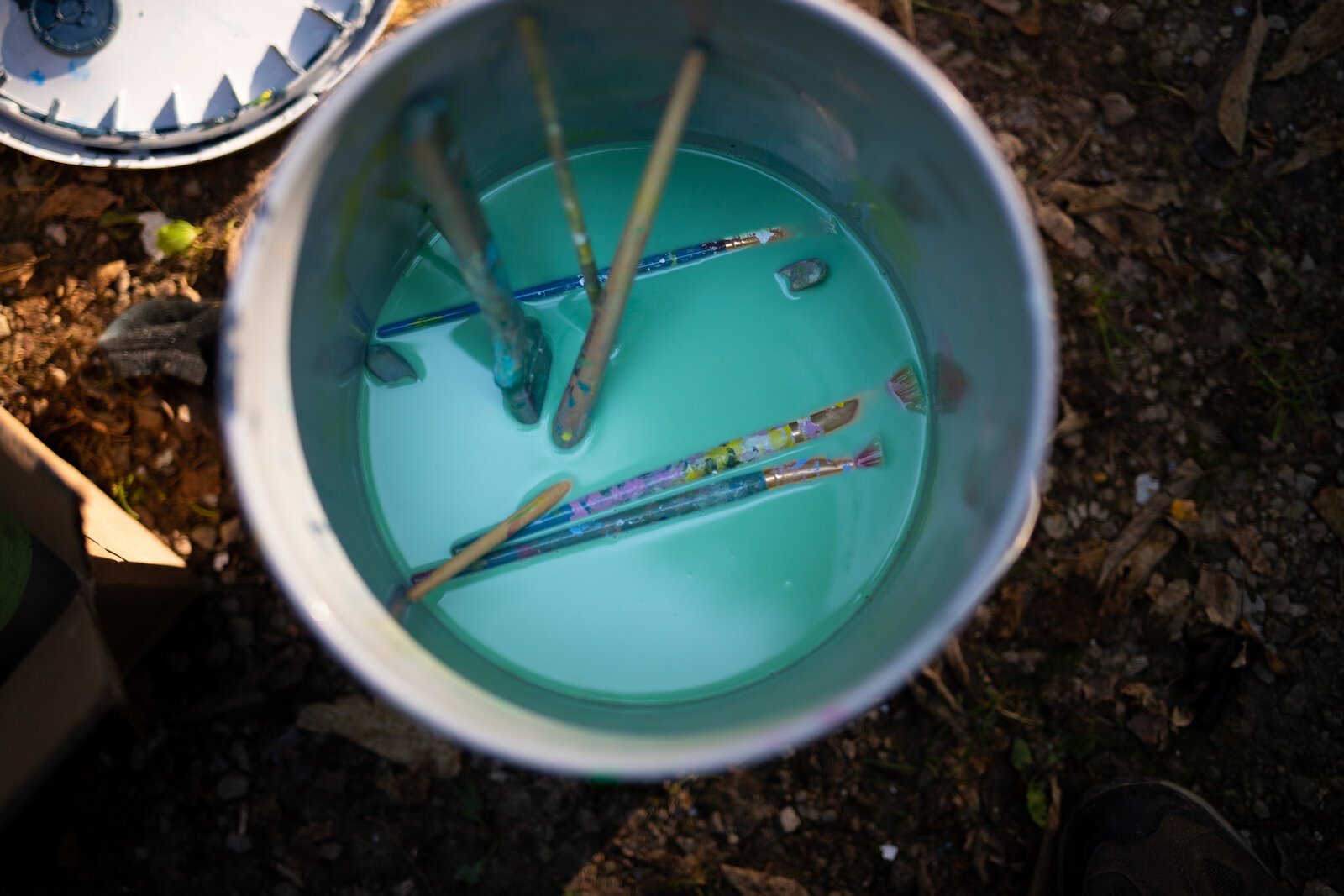 After my experience as a mural assistant in Columbia City, I discovered the open walls. I had two exterior paint colors (the leftover navy and white that we had used on our garage the year before). I mixed these two to get a few undertones in between. On my days off, I painted monochrome images of a dog and an athlete. That’s what put me on Francisco’s radar.

IFW: What is your greatest hope for the future of public art in Fort Wayne?

RS: My biggest hope right now is actually directed towards the creators rather than the audience. I want the barriers broken down so that more local artists have the opportunity to show their talent.

This was Fransisco’s vision for Open Walls and the Elevation event. But he only thought about the walls and the qualifications for the mural competitions. I hope that people like me who make public art can equip other interested creators with the knowledge and connections necessary to make their own large-scale dreams come true.

A manufacturer in demand for poetic and quirky furniture