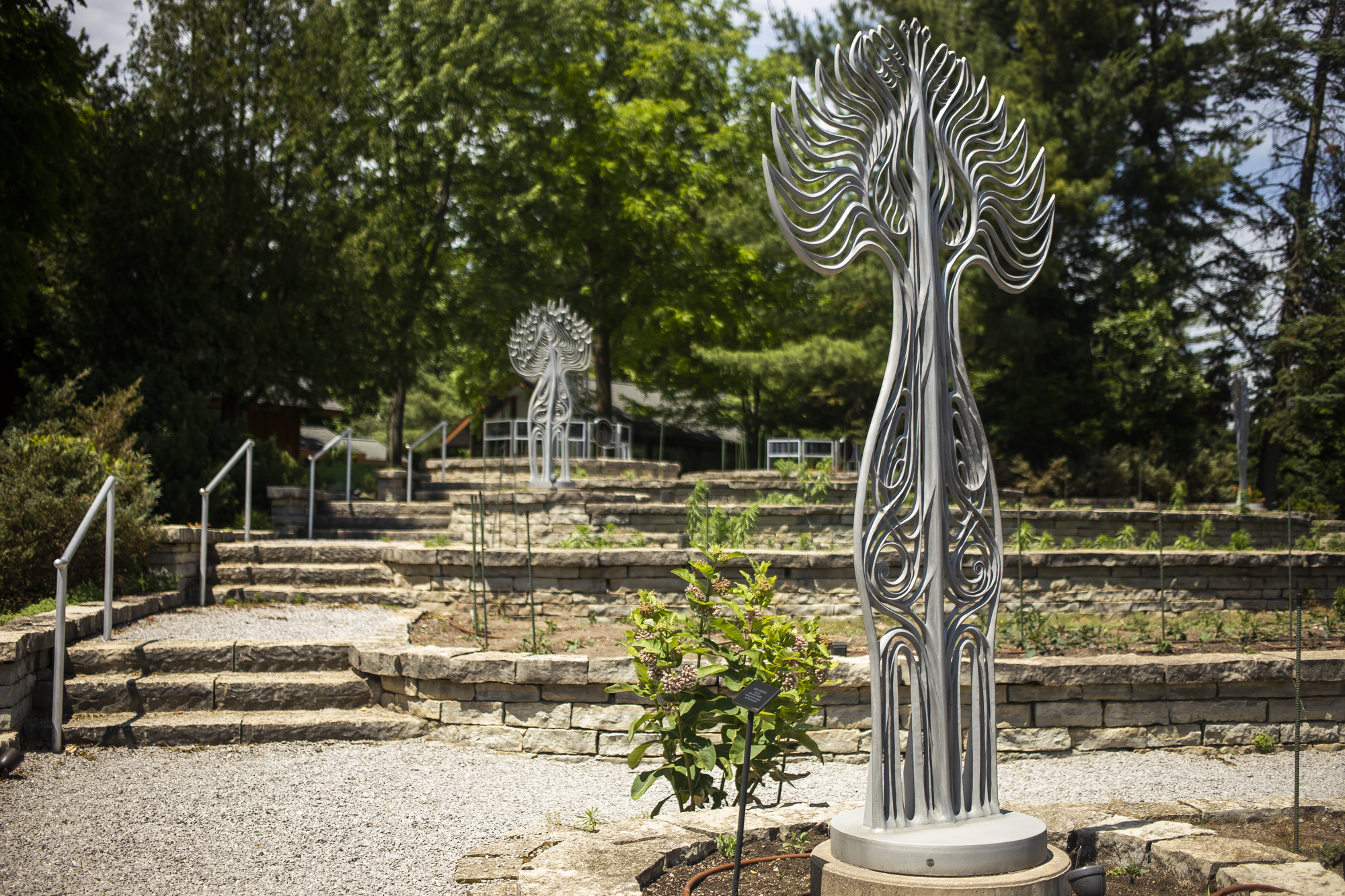 Midland is home to dozens of public works of art, including sculptures and plaques. While some installations offer colorful cues, others compel passers-by to stop and take a closer look.

Here are some public art installations that can be found in the northern sector of the city, stretching from the south towards the city center.

The Medallions of Midland

First impressions are important, which is why a group of Midlanders have used public art to help visitors understand what Midland is all about as they enter the city.

Motorists driving on Eastman Avenue near the mall might spot two pairs of bronze medallions on the US-10 bridge, each depicting aspects of Midland’s rich history.

In the early 2000s, former Midland City Manager Jon Lynch approached the Entry Initiative Task Force with a request to put a medal on the bridge as a sign of welcome to Midland. In this case, when the bridge was built, four footprints were included for such panels. The task force contacted local artist Jim Ardis for ideas. Ardis eagerly presented the group with 32 possible designs for consideration.

“Since moving to Midland I have noticed the use of copper. After living here for a while I realized it was the Dow family that was behind this, especially Alden Dow. Thought we should have something to commemorate it,” Ardis said in a January 2022 post.

The medallions were installed in March 2004. The Midland Area Community Foundation, along with other local organizations, provided funding for the project.

Two designs were chosen, one for the south side of the bridge, the other for the north side. The south-facing design depicts three light towers designed by Alden B. Dow and used in the landscaping. The border has an inscription of “City of Midland, 1887” – the year the city was incorporated – and includes Michigan’s state tree, the eastern white pine.

The north-facing medallions honor Herbert H. Dow, showing a conical flask with the chemical compound polystyrene in the middle; polystyrene is used in the manufacture of Styrofoam, invented by Dow Chemical. Junia Doan, a member of the Entryway Initiative Taskforce, chose to include Midland’s moniker as “City of Modern Explorers” for these medallions.

“It’s a very positive attitude to be an explorer,” Doan said. “I think it’s a gift that Midland can share now in that sentence when he arrives.”

Motorists and pedestrians coming to the intersection of Washington and Wheeler Roads will spot a bright orange abstract sculpture on the corner titled “Illusions.” In the early 1990s, the late Midland entrepreneur John Rapanos commissioned the late Bruce Davis to create a sculpture to adorn the property of Rapanos Investments.

John and his wife, Judy, enjoyed art. Judy explained that John had met Davis on his travels and was impressed with his work. Very little is known about the meaning of the sculpture or why John commissioned it.

“I’ve always believed that artists’ work should be shared with the public,” said Judy. “Whether it’s sculptures in the open air, in museums or in private homes, I think it has to be shown. Artists bring real value to our communities. Art makes a person whole.

Davis, a Wisconsin native, learned to weld after being honorably discharged from the US Navy in 1957. He then worked at Brown Machine in Beaverton and eventually moved to Sanford. In addition to “Illusions”, he also created sculptures located on the campuses of Northwood University and Michigan Technological University.

The second piece on the Rapanos Investments property, closer to the building, recalls a series of past summer sculptures. Al Chmelar created the piece, titled “Unity” as part of the 2006 series, “Alden B. Dow Block Party”. The piece was one of 16 works of art that were auctioned off in September after the project concluded.

Grace A. Dow benefited the Midland community in many ways during her lifetime, including helping to plan the current Midland Library that bears her name. His good works are continued by the Herbert H. and Grace A. Dow Foundation, which donated the library to the city. Sadly, Grace died two years before the library was completed in 1955.

The Monday Club, a literary group of which Grace was a member, commissioned a plaque honoring the philanthropist. Italian artist Giulio Tamassy designed and constructed the bronze plaque titled “Flower Treasures”. The plaque was dedicated and installed at the library in November 1973. The work, located at the end of the pavilion near the entrance to the library, depicts a tree covered in flowers.

Among those who spoke at the plaque dedication ceremony was Mrs. Robert R. Wolf, Past President and Chair of the Dedication Committee.

“This memorial, we believe, is the first honoring Mrs. Dow with the sole purpose of saying, ‘Thank you, Mrs. Dow, for your warm friendship and for all the benefits and opportunities you have given us and the community of Midland . “, with no other function attached to the memorial,” Wolf said.

In 1991, the library received another public art donation. Handa Japan donated a garden to the library to celebrate a decade as a sister city to Midland. The garden included three lanterns, which Handa Mayor Hiroshi Takeuchi officially dedicated in September. The lanterns are made from stone harvested near Handa.

The Kasuga lantern is the largest of the three. This type of lantern was used to illuminate the facades and aisles of temples as early as the 5th century. The Yukimi lantern was designed to represent snow on a bamboo wooden hat. The design of the third lantern, the Oribe, dates from the 17e century and is composed of a tree swollen in a sphere with a lotus bud on its roof.

“It’s the best way to introduce Japanese culture and spirit to the American people,” Handa Mayor Hiroshi Takeuchi said in a September 6, 1991, Daily News article. Just looking at it will give silence, implying silence in your heart.

The eternal flowers of Dahlia Hill

While the flowers of Dahlia Hill bloom and wilt with the seasons, four sculptures watch over the hill all year round.

Charles Breed, artist and founder of Dahlia Hill, began designing four “Seasons of Life” sculptures in the late 1990s, according to Peggy Kernstock, executive director of Dahlia Hill. The sculptures are based on cross-sections of dahlias with human characteristics, each representing a specific period of life. “Spring” depicts a person from birth to 20 years old, in the “bud” stage of life as they learn about the world around them. “Summer” represents the 20s to 40s when a person “flourishes” and builds their family. “Autumn” represents someone “going to sow” when they reach the age of 40-60 and giving back to the community. “Winter” depicts the “withering” stage of a person between 60 and 80 as they learn to let go.

“The different parts related to the equinoxes and solstices are meant to be floral patterns, inspired by flower buds and petals,” Kernstock said.

Breed created original models, which were cast in aluminum in Saginaw and installed in 2008. Casting was done in 2-by-4-foot pieces that had to be fused together. While most of Breed’s artwork – some of which is on display at Dahlia Hill – is plastic, the aluminum sculptures are among the few outdoors and most accessible to passers-by.

“Having them available to people is a great way to bring people in and get them familiar with his designs,” Kernstock said.

This is the first in a limited series about public art in Midland. Permanent installations including murals and sculptures around the city will be presented.