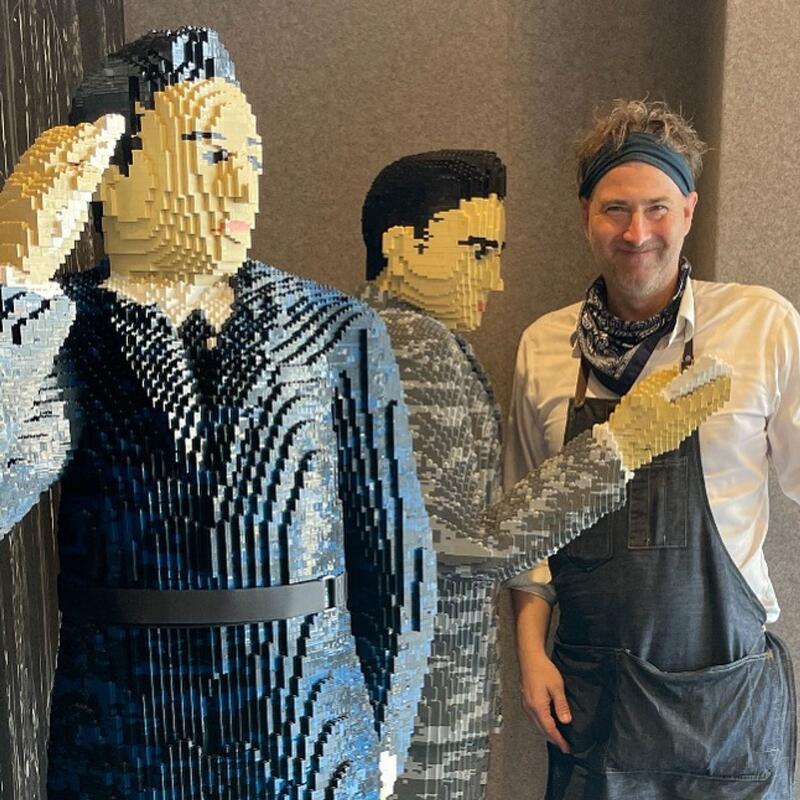 Chris Ihle, Iowa State alumnus and founder of We Build U, works with a team to create a life-size Lego statue of George Washington Carver at the Iowa State Fair. Construction will take 11 hours each day of the fair and will require 44,000 Lego pieces.

Traditionally used to escape the heat, the Varied Industries building on the Iowa Fairgrounds is home to many booths, selling tubs or outdoor gear to fairground goers who cool off with a paper fan on a stick. of popsicle.

Three stalls, however, sell experiences and the promise of a prosperous future in addition to the merchandise. The University of Iowa, Iowa State University and the University of Northern Iowa, although rivals, have neighboring booths at the state fair each year.

Without a fair last year due to the pandemic, universities are doing everything they can to ensure a successful presence at state fairs this year.

Throughout the week, ISU alumnus Chris Ihle and a team will be building a life-size sculpture of Legos’ George Washington Carver.

Ihle is the founder of We Build U, specializing in life-size Lego sculptures. Together with Chris Rau, who designed the sculpture, it will take 44,000 Lego pieces to complete.

“I know Chris and I both wanted to do something for Iowa State, so he reached out to them to see what they might want,” Rau said. “I think the timing really worked with the fair to generate interest and show off one of the historical figures of the ISU.”

When complete, the statue will reside on the Iowa State Campus at a location yet to be determined.

It has been 125 years since George Washington Carver graduated from ISU. Carver was the first black student and high school faculty member. One of the most renowned scientists of the 20th century, Carver was a pioneer in the field of agricultural science.

The goal of We Build U is to use Legos to educate visitors about the long-standing legacy of George Washington Carver.

“I think about it because Lego itself gets the initial attention of ‘Wow, that’s pretty cool’, and generates an interest in what’s going on,” Rau said. “They will then see that we are building a person and hopefully make them wonder, ‘Why this guy? What did he do to have a unique statue built? From this interest arises an openness to know who George Washington Carver is, his connection to the ISU and his historical contributions.

The team of builders will spend 11 hours each day of the fair building the statue.

The University of Northern Iowa is focused on “Achieve Beyond,” which focuses on the untapped potential of students. By attending the four-year institution, UNI students are able to realize their potential and take it beyond what they expected.

“After years of research, we’re really helping students realize their unrealized potential,” said Sara Kies, associate director of marketing and branding at the University of Northern Iowa. … “They come to UNI with fears, hopes and dreams like everyone else. But what we found in our research were people saying, “I never thought I could do as much as I do now and that’s because of my experience at UNI. So we are really trying to integrate that into our UNI brand and that will really be our theme this year. “

UNI will also be promoting a new partnership with Des Moines Area Community College (DMACC), which will make it easier for DMACC students to transition to UNI or register for online courses through UNI.

After last year’s hiatus, Kies is hoping to bring purple back to 515.

“They must expect to see a lot of purple,” Kies said. “The chance to really celebrate UNI and see what UNI brings to Iowa as a whole. I think that’s what we’re trying to do with our being at the state fair, is Iowa and Iowa State, those are household names, but you go into some parts of the world. ‘State and they don’t know what UNI is, who UNI is, so this is really an opportunity for us to be proud of who we are and to connect not only with the residents of Des Moines, but also statewide and out-of-state. ”

The University of Iowa plans to incorporate many of the same exhibits and activities from previous years. Herky and members of the Iowa Spirit Squad will be in attendance, along with volunteers from various UI departments and organizations, including Dance Marathon, STEM, UI Health Care and Athletics, to promote the events.

Admissions counselors will also be on site to answer questions about enrollment and the upcoming school year.

The Iowa State Fair will be held Thursday through August 22 at the State Fairgrounds in Des Moines.