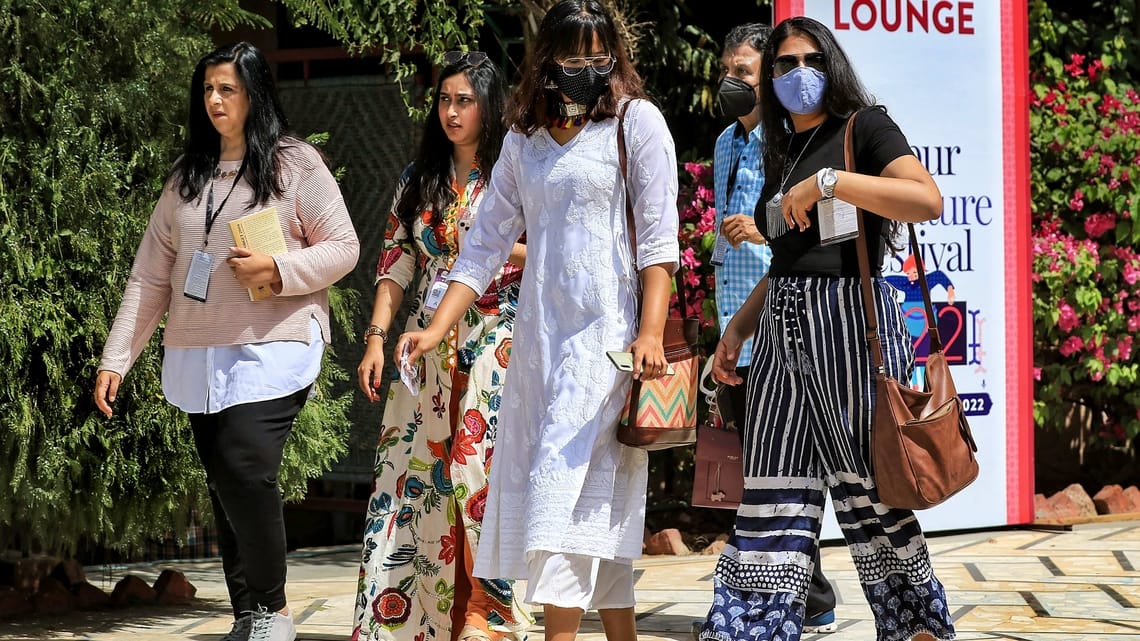 Yes, covid-19 has fundamentally changed us all. It has also changed the Jaipur literature festival experience. What that hasn’t changed are the possibilities that arise when clever, contrarian, original minds come together in one place for a week – there’s immense learning, of course, but also snark exchanges and tantrums.

If you’ve followed the Jaipur Literature Festival (JLF) for the past 15 years of its existence, you’d know what it’s been like every year: the coziness of late January, the predictability of spotting quilted Jaipuri jackets on delegates and attendees. , see and hear the literary and intellectual stars and their freewheeling thoughts as you sometimes strolled, sometimes rushed through the premises of the Diggi Palace, to attend the many sessions.

In 2020, JLF performed in January as usual, narrowly missing the wrath covid has caused around the world. In 2021, the pandemic forced the festival online. JLF has maintained its digital ownership, playing a tireless year-round host for literary discussions, unframed by the usual five-day festival.

In 2022, in its 15th edition, even as it returned to its original style of on-the-ground programming, the mood of the festival changed even more. First, JLF moved from the 162-year-old luxury hotel Diggi Palace to the more conventional Clarks Amer hotel. The various locations within Diggi, which JLF had named and delineated to facilitate parallel sessions – the Front Lawn, Durbar Hall, Mughal Tent, and Baithak – were to be superimposed on Clarks Amer. Second, due to Omicron, the festival had to be postponed from its usual January time to March. And boy, the sun was there too.

Like many other things in our lives now, it was a hybrid festival, with the five days pre-recorded and online only, and the other five days being the main lineup on the ground. This made it a bit too stretched. Many international attractions – including popular writer Elif Shafak, 2021 Booker laureate Damon Galgut and 2021 Nobel laureate Abdulrazak Gurnah – were only online; others opted out of the physical event due to various international travel uncertainties. Yet others, who were due to be present at the festival on the ground, had to cancel at the last minute. This made the experience somewhat dull and fraught with a few disappointments. Seeing in person authors and thinkers you would hardly have access to even in the age of social media, rushing to have a book signed by them after their panel, the opportunity to exchange a few words with them via the during the week — it’s these little moments that make JLF happy.

The physical experience of sailing at a different time of year and in a bigger location – a decision made to ensure the safety of the growing crowds that JLF began to attract over the years – was also surprisingly drastic. If you are someone who attends with diligence and curiosity, the physical exhaustion caused by the heat has reduced your ability to really absorb and engage in nuanced thoughts during some of these sessions.

But there was a lot to add to that comforting feeling of familiarity and joy. The boring pleasure of too many options – do you want to hear new voices like Dariba Lyndem share the stage with literary legends like Mr. Mukundan, attend a lecture with biographers and historians like Manu Pillai and Ira Mukhoty, or listen to the politician-writers Shashi Tharoor and Smriti Irani expound elsewhere?

Then there was the sheer satisfaction of listening to writers who not only treated their art like craftsmanship, but also made you think, like the session with translators from writing Indian languages ​​into English. Ministhy S, Fathima EV and Nandakumar who work between Malayalam and English spoke clearly about their work, emphasizing the need to navigate and understand the cultures contained in the languages.

As before, there were minor controversies – journalist-politician MJ Akbar, originally invited by JLF, was removed from the lineup after questions were raised about the festival rehabilitating those accused of the #MeToo movement. Others have wondered why nothing seems to have been done yet about William Dalrymple, one of the festival’s co-founders and co-directors who was also nominated by many women.

It was also similar to previous editions, when some authors and darlings of literary circles authoritatively spoke the most exciting nonsense (one of them confidently stated how a target word a day can help with discipline – better late than ever, maybe). Some got drunk and threw tantrums (an international writer forced festival volunteers to keep the author’s lounge open late into the night, drinking alone). Many have worked hard to prepare for their sessions; others seemed more interested in spotting who else was around and being seen around.

As always, with JLF, the truly moving moments were offstage, but not so far from the authors around whom viewers gather. Readers and non-readers, young and old, sat in wait 10 minutes before a session started, bags, notebooks and pens working to rescue someone from a seat; it was more of a serious but long-winded comment than a question that invariably popped up when a session was opened to the public. The young couple taking selfies with an author whose book got them talking; the lucky first authors of the covid era finally physically meet the publishers who helped their books see the light of day; underrated or unknown voices making their presence felt; the troops of uniformed school children marching for a panel – it’s all that makes us recognize ourselves as people who want to talk, not just trade barbs on social media; as people who want to engage, and hopefully not just in the different shades of our own beliefs. After the two very long years that we have all experienced, here are many more festivals of this type are back on earth, in full force.

Grantville Freight Depot will be painted by ‘The Color Purple’ production

‘Seed of Hope’: Sunlight enters the portal of a sculpture to an enamelled bronze seed