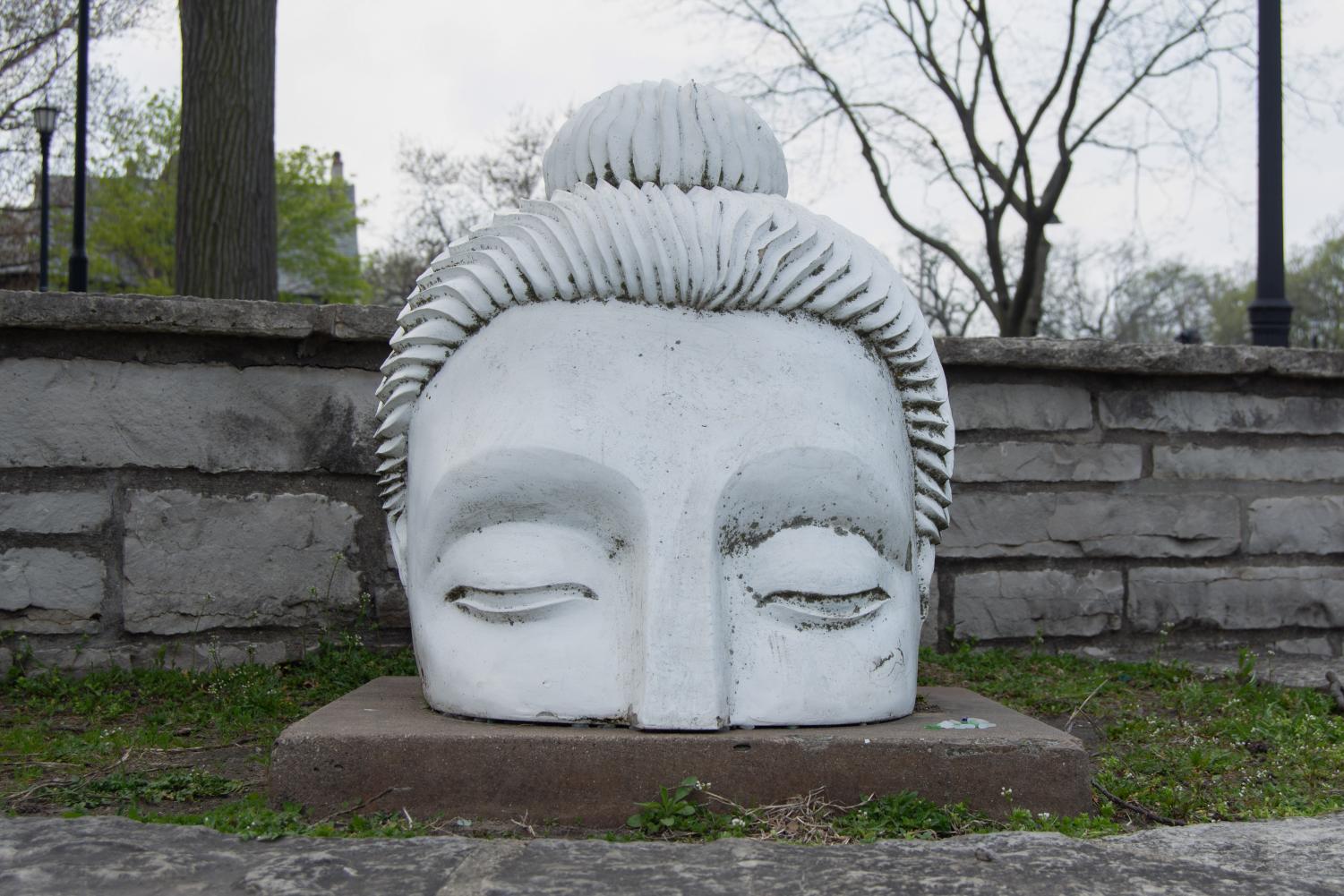 Evanston artist Janet Austin said she was hesitant about her ‘Attached’ sculpture because it might be controversial because of her environmental stance against the use of pesticides, but she said it didn’t seem not be a problem. “I got some great responses about what that meant,” Austin said.

In Dawes Park, a Buddha head sculpture emerges from the ground. For designer Indira Freitas Johnson, the piece is meant to exude a sense of beauty and tranquility that can be enjoyed by passers-by. Part of a larger public art program in Chicago, Johnson said “Ten Thousand Ripples” had a positive effect on the experiences of residents in the community.

“One of the things we wanted was to engage people with the art that’s in their neighborhood,” Johnson said. “You don’t have to go to a museum or gallery to see art – art can be around you.”

The Emergent Buddha is far from Evanston’s only piece of public art. Sculptures created by various artists are scattered around the blocks for the general public to enjoy, while sharing meaningful messages. These pieces can be found on Evanston’s recently updated public art interactive menu.

Sachs said the city’s funding for public art comes from three main sources: taxes, individual donors, and an ordinance that designates up to 1% of the overall construction cost of each public building for art.

Another such artwork in Raymond Park is “Conversations; Here and Now,” which Johnson also created. This piece, she said, is about cultivating peace and individual agency and involving people in the process of installing public art.

“Interviews; Here and Now” is a circle of seven uniquely designed chairs with an empty space in the middle. Johnson said his wish was for people from diverse backgrounds to sit down and interact, filling in the empty space.

“I feel like all public art has to have (commitment),” Johnson said. “Thus, each of the chairs represents something, and whoever sits on it then has a voice to speak.”

Austin said “Attached” highlights his anger over the overuse of pesticides.

“The Wasp is a perfect example of something that’s really targeted,” Austin said. “I think even the smallest things have the potential to carry life on Earth. You get rid of one of them, maybe you could crash an entire ecosystem, or at least make it less functional.

At the base of the installation is a poem by Austin which includes a paraphrase by naturalist and conservationist John Muir: “I pollinate / I build nests fit for a queen / I consume swarms of harmful parasites / Call me hornet, wasp, / Yellow vest, vespa / We live together / When we shoot a single thing in nature, / it finds her attached to the rest of the universe.

Pedestrians on Sherman Avenue can also encounter some of Evanston’s public art exhibits. Chicago-based artist Anna Soltys designed “Amalga,” a white form partially covered in mosaics that changes appearance depending on perspective. It is now outside the Albion building.

“Amalga” comes from the word fusion, which means the process of combining or uniting things together, or the result of doing so. Soltys said she likes to search for weird words. Sometimes, she says, she spends months diving down a rabbit hole of words before finding the right one for a work of art.

Soltys said she never knew what she would create when she first sat down. Instead, she said she let her subconscious take over and whether or not the finished product made sense. In this case, Soltys said “Amalga” made sense because it demonstrated the idea of ​​connection.

“In all of my work, I really enjoy exploring the internal psychological struggles that we all face and really thinking about the things that connect us,” Soltys said. “A lot of times we connect a lot through mystery and pain and very personal things, because then we realize we’re not alone.”