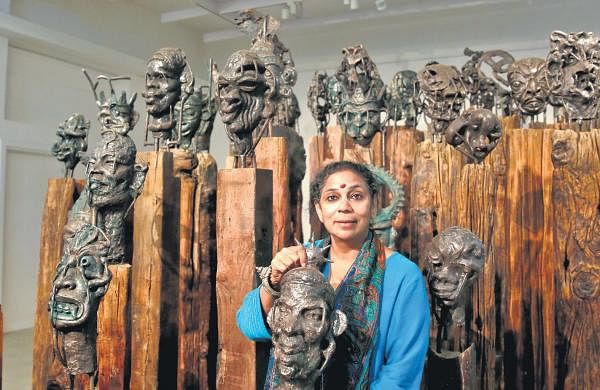 As a child, I would make idols of Saraswati and Ganesh out of clay, do a pooja and dip them in water,” recalls artist Nivedita Mishra (54). Similar examples from his childhood provided the creative groundwork for his recent work “Nitya,” a solo exhibition featuring sculptures inspired by tantra, an esoteric spiritual practice in Hinduism. Currently on view at Triveni Kala Sangam, Mandi House, Mishra’s exhibition centers on the female form which the artist explores through the prism of mythology.

“I wanted to represent Shiva and Shakti in my series because you cannot separate the two. I have been curious about spiritualism since childhood. Today, with war and the pandemic, there is no certainty anywhere I think in the current times, spiritualism is the only path we can follow to be calm and normal,” shares Mishra.

Growing up in Rakshimunda, a remote tribal village in western Odisha, Mishra was exposed to several indigenous traditions, memories of which are incorporated into her recent work. Mishra claims that her goal from the beginning was to create an aura that can represent the past and the infinite power of the devi (goddess).

One of his works represents 64 Yoginis in bronze, surmounting wooden planks. According to tantric tradition, the Yogini is a sacred feminine force that appears in a group of 64. A thick layer of haldi (turmeric) marks the limit of this work. “Haldi has an auspicious presence in our culture. It has medicinal value and is a symbol of purity. His presence creates an aura of his own,” says Mishra.

The work stands out for its intricate metal detailing which Mishra admits to having attempted for the first time. The rustic look of this piece further makes it seem like the faces are talking to you. The artist admits that her work “Kamakhya” is deeply personal to her, given the connection she feels with the goddess Kamakshi, who is the goddess of love in Hinduism. The artwork, crafted from black marble and granite, is a tribute to the goddess who, according to Mishra, “lives within all of us”.

The artist’s distinct creative voice and deep interest in a subject that has gripped his heart and soul for centuries permeates his work. “It wasn’t just work [created] in seven months. I have known this concept since childhood; it’s the product of 35 years of my sculpting practice,” she adds.

Develop a unique voice
‘Navgraha’, a body of work depicting the nine astral bodies explores their connection to Shiva. Inscribed with shlokas (verses), traditional symbols and animal figures, these sculptures were placed outside, where Mishra says, “it establishes an instant connection with heaven.” Another work presented depicts human sacrifice, an important component of Tantric rituals. Speaking about this controversial piece of art, Mishra shares, “I showed that they are aware that they will be sacrificed, they have surrendered to the goddess. In return, they seek peace and harmony for society.

They seek nirvana (an idyllic state) through this process. The artwork – an amalgamation of stone, wood, fabric and many indigenous elements – seeks to take the viewer back in time to the 1st millennium AD, to be left awestruck by the traditions that once made part of society.

Mishra dedicated this series to her father, Nityanand Mishra, a former MP, who passed away in July last year. Recounting his memories, Mishra concludes, “When I was little, he could notice the talent in me very well. This show is not a tribute to him, it’s a gift.