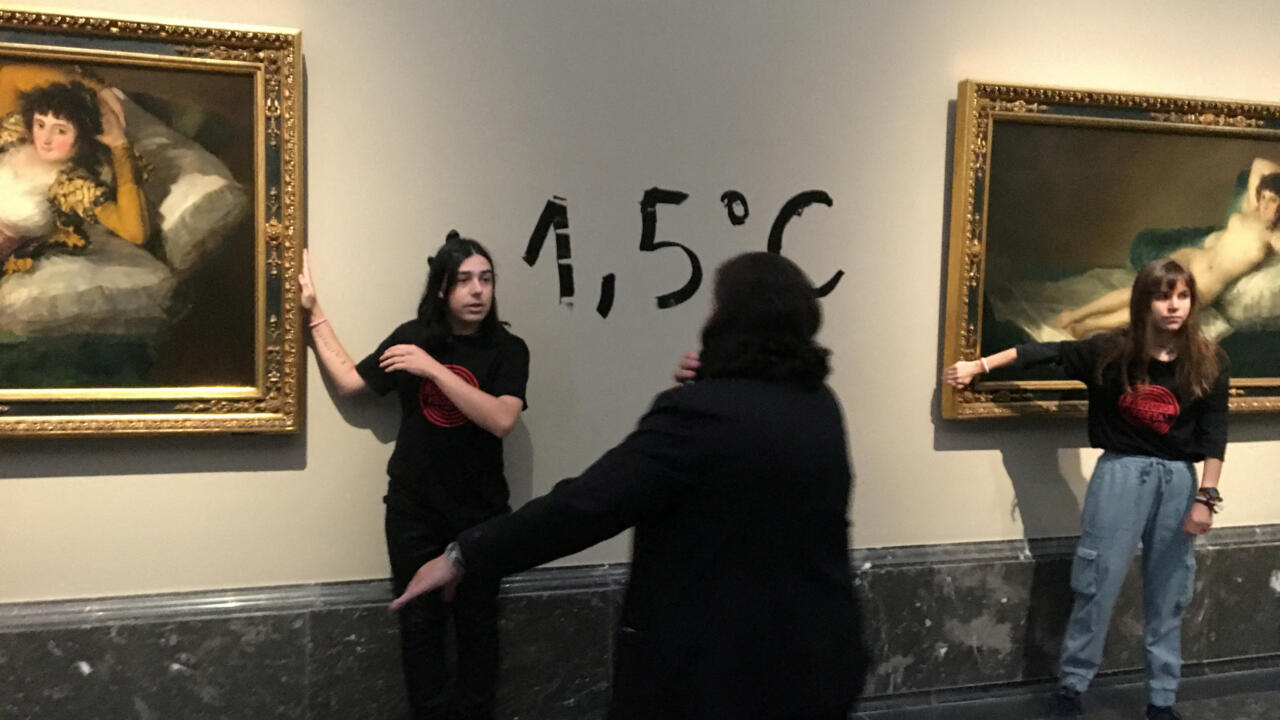 On Saturday, two climate activists each stuck a hand to the frame of Spanish master Francisco Goya’s paintings in Madrid to protest inaction on global warming.

The protest at the famous Prado Museum did not damage any paintings, but protesters scrawled “+1.5C” on the wall between the two artworks and the two were arrested, police said.

The United Nations warned last week that the world was far from the Paris Agreement target of capping warming at 1.5 degrees Celsius above pre-industrial levels.

Saturday’s stunt in Madrid was the latest increasingly daring move by climate activists to grab headlines, including throwing soup at paintings by Vincent van Gogh in London and Rome, and the mashed potatoes on a masterpiece by Claude Monet.

On Sunday, nearly 200 nations will kick off the latest climate summit in Sharm el-Sheikh, Egypt, to tame the terrifying juggernaut of global warming.

Climate activist group Extinction Rebellion uploaded a video showing the two activists each with one hand fixed to a painting before museum security intervened.

The band said the two works in question were “The Naked Maja” and “The Clothed Maja”.

The action was aimed at protesting against rising global temperatures which “will cause an unstable climate with serious consequences for the entire planet”, the group said.

Videos released by Extinction Rebellion show the two young women pulling glue from their clothes and sticking their hands to the picture frames before addressing other visitors to the museum.

Part of the crowd yells at the activists before security appears and asks those present to stop filming.

Spanish Culture Minister Miquel Iceta denounced the attack, writing on Twitter that it was an “act of vandalism” and that “no cause justifies attacking everyone’s heritage”. .


This is the latest in a series of protests by climate activists targeting famous works of art in European cities.

A group splashed pea soup on a Van Gogh masterpiece in Rome on Friday.

“The sower”, a painting from 1888 by the Dutch artist representing a peasant sowing his land under a dominant sun, was exhibited under glass and in good condition.

Four activists have been arrested, according to news reports.

Last Generation climate activists called their protest a “desperate and scientifically based cry that cannot be understood as mere vandalism”.

They warned that the protest would continue until more attention was paid to climate change.

Other actions have seen cake or mashed potatoes used in recent weeks.

They targeted masterpieces like Leonardo da Vinci’s “Mona Lisa” at the Louvre in Paris or Johannes Vermeer’s “Girl with a Pearl Earring” at the Mauritshuis Museum in The Hague.

In October, the group Just Stop Oil threw tomato soup on van Gogh’s “Sunflowers” at the National Gallery in London.

All these paintings were covered with glass and were undamaged.

At the Galleries: Fall into art with sculpture, jewelry and contemporary works