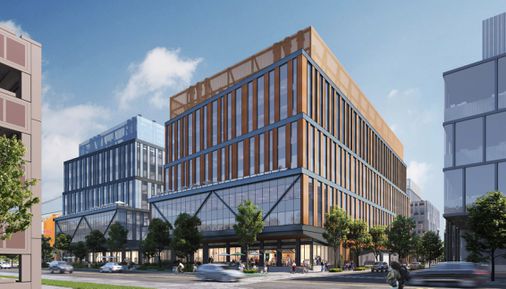 Architecture and design firm SGA has a new direction at the helm.

The Boston-based company The company, founded in 1991 by Al Spagnolo, Jeff Tompkins and Bill Gisness, will now be run by equal owners: CEO Adam Spagnolo; Gable Clarke, president of interior design; and John Sullivan, president of architecture. Al Spagnolo, meanwhile, will move into a chairman role.

Since its inception, SGA has employed approximately 130 people in Boston and New York, and is currently working on over 15 million square feet of active projects. Some of the company’s projects in the area include a future expanded headquarters for Ginkgo Bioworks and the interior design of the headquarters for hair care company Living Proof in the Boston Seaport; passive house projects at Wheaton College and Williams College; and LINX, a science and technology campus in Watertown.

The leadership transition comes at a time when real estate projects related to life sciences – an area of ​​practice in which SGA has worked for more than a decade – have exploded across the region, and employers are considering how to design workplaces to attract employees. office.

Get the pace of innovation

The Boston Globe’s tech reporters tell the story of the region’s technology and innovation industry, highlighting key players, trends and their importance.

“It’s an exciting time to be a designer,” Clarke said. “The spirit of SGA has always been very entrepreneurial. Al, Bill, and Jeff really instilled that in the three of us, and we’re really excited to instill that in others.

SGA’s workforce has more than doubled over the past two years to reach 130 people today. Most employees are based at the company’s headquarters in downtown Boston, with about 30 in New York City. Adam Spagnolo, a native of Lynnfield and son of Al Spagnolo, will remain based in New York.

The bulk of SGA’s work has focused on its two home markets, Greater Boston and New York, but the company is increasingly being called upon to tackle projects in other parts of the country, a said Adam Spagnolo.

“It’s really important for us to continue to be a diverse company, which has always been the DNA of the company,” said Adam Spagnolo. “As an architecture, engineering or construction firm, I think you have to be prepared to follow the ebbs and flows of the market.”

Beyond Sullivan, Spagnolo and Clarke becoming owners, SGA also named five new directors and seven directors. Clarke will be the first woman to serve as president in the company’s three-decade history.

“Architecture hasn’t always been the most diverse profession in the world, but for us to have women owners and more women moving up the ladder…is really important to us,” said Adam Spagnolo.

“It’s really about benefiting from other points of view,” Clarke added.

SGA will retain its headquarters in Boston.