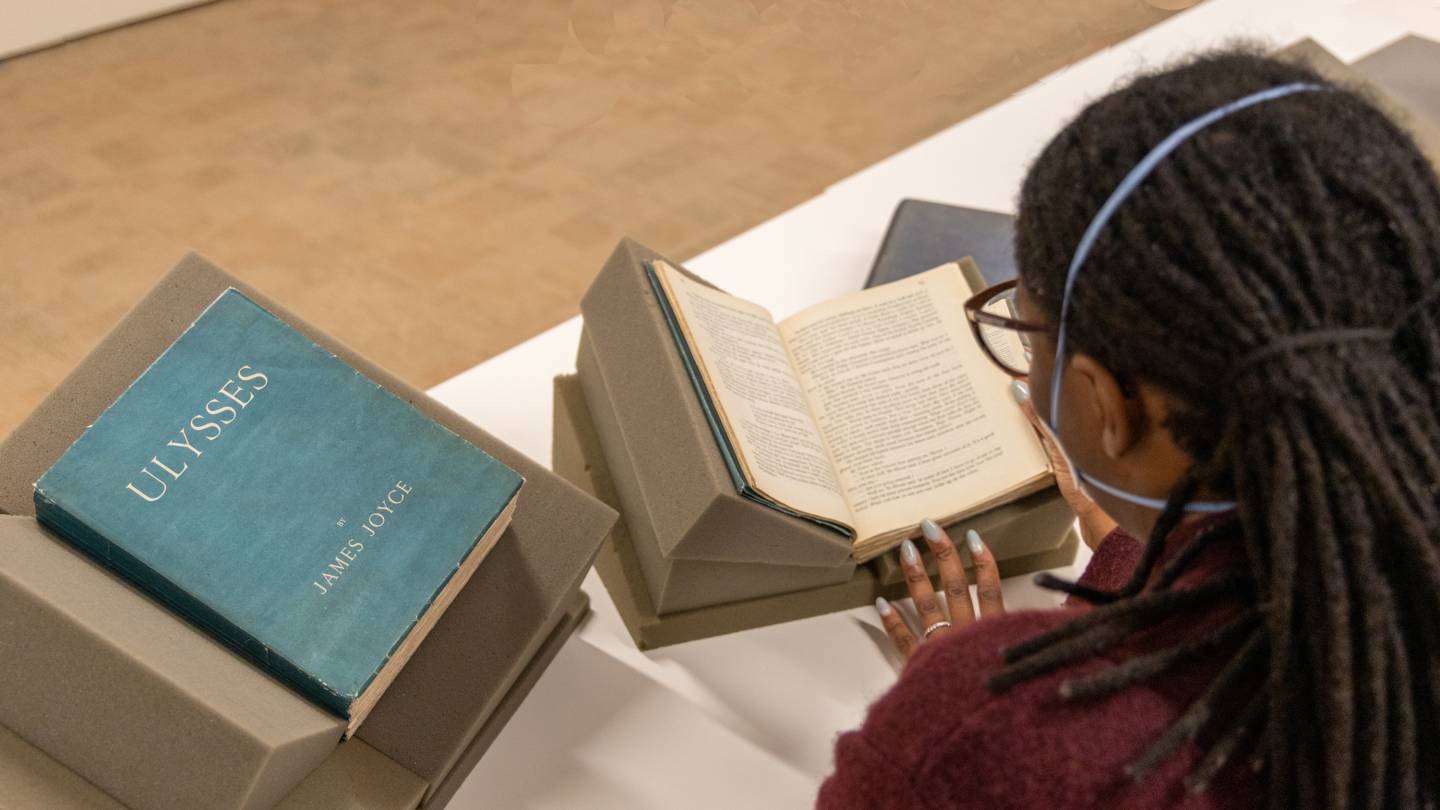 What does “Ulysses” by James Joyce tell us 100 years later? Published in 1922, the same year the Lincoln Memorial was dedicated and the Hollywood Bowl opened, “Ulysses” is an inextricable part of the modern literary canon that has received more than its fair share of praise (and criticism). Fans around the world mark Bloomsday on June 16, the day the action of the novel takes place.

Still, Associate Professor of English Joshua Kotin thinks we’ve only scratched the surface of what ‘Ulysses’ has to offer. His graduate seminar, “Special Studies in Modernism: 1922”, explores the work of James Joyce as well as the contemporary publications of TS Eliot, Virginia Woolf and Claude McKay considering their influence 100 years later.

“This class presents a way of thinking about modernism and reflecting on the significance of this year,” Kotin said.

Stimulated by the centenary of the publication of “Ulysses”, Kotin believes that modernist studies must experience a renaissance. In addition to wanting his students to glean literary meaning from course texts, Kotin emphasizes the process of contextualizing literature as part of a larger historical conversation.

“I wanted them to think about what context is — we’ve always been told to contextualize literature, but I’m not sure anyone really knows how to define that process,” Kotin said.

To that end, Kotin enlisted Jennifer Garcon, Librarian for Modern and Contemporary Special Collections at Princeton University Library (PUL), who manages the collection, curation, and maintenance of materials from the 20th and 21st centuries. Kotin and his students made several visits to PUL’s special collections during the spring semester. 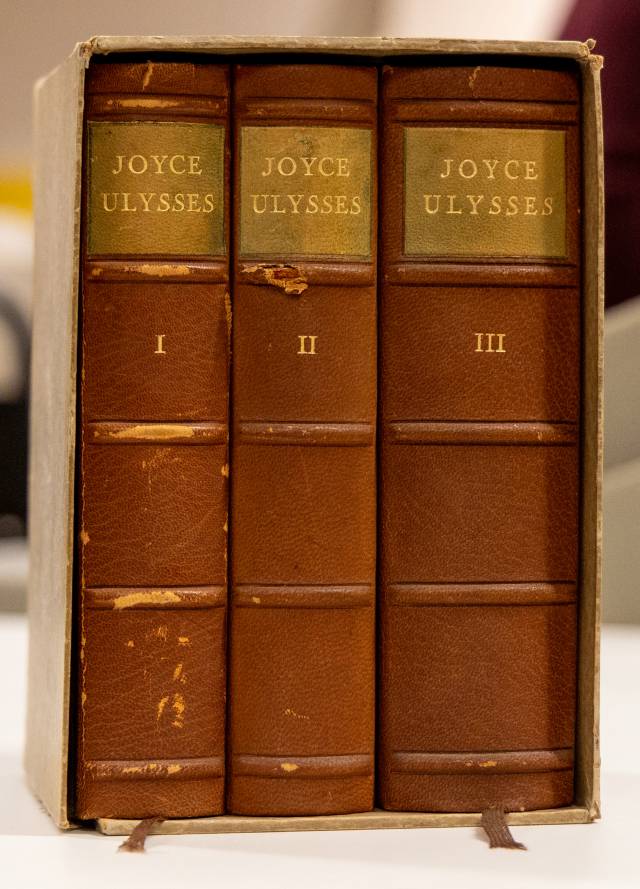 This German three-volume set of “Ulysses” by James Joyce, part of the PUL Special Collections, was published by Privatdruck in Basel, Switzerland in 1927.

Garcon supported the class by calling many copies of Joyce’s “Ulysses” from the library’s Sylvia Beach collection. Beach, an American bookseller in Paris, first published “Ulysses” in 1922 in her bookstore and lending library, Shakespeare and Company, which she founded in 1919. The shop becomes a meeting place for French, English, American, Irish and other writers — including James Joyce — from the 1920s to the 1930s.

The Beach Papers, acquired by PUL in 1964 and held at the Firestone Library, document much of Beach’s life and activities. The collection includes material related to Beach’s publications of the works of James Joyce, including the controversial “Ulysses”, which was banned in Britain and the United States until the mid-1930s. The collection also includes numerous documents related to Shakespeare and Company, correspondence with authors such as TS Eliot, Allen Tate, Richard Wright, George Antheil and DH Lawrence, as well as personal documents, photographs, writings, works of art, manuscripts and memorabilia from Beach.

“Students were able to see different editions of ‘Ulysses,'” Garcon said. “They could see it serialized, in its initial appearance in small magazines. They were able to touch and manipulate the objects themselves. And due to the variations in how it was printed and the publishers’ financial constraints at the time, they can also see a visceral difference in the material over time.

Watch ‘Ulysses’ in the context of the 1920s, create new scholarship

Kotin’s class also focused on the dichotomy between the sheer volume of commentary on Joyce’s work and the still untapped potential of archival reserves.

“On the one hand, we’re diving into the middle of a million conversations about these canonical, important, and influential books,” Kotin said. “On the other hand, we want to use the Firestone Archive to think about the potential of unpublished artifacts, texts and documents that have not been examined. How can these two versions of the story speak to each other?

As researchers, Kotin and Garcon frequently returned to the question of how to constitute new collections from the materials extracted from the archives.

“We discovered things together that we didn’t know were in special collections and identified gaps so we could say, ‘It would be great if the library could acquire material in this area,'” Kotin said. . One such resource was letters from black modernist authors such as Paul Laurence Dunbar, Ralph Ellison, and Richard Wright, which they found almost entirely in the archives of white publishers and poets.

“So now we have to think about how to build collections that are more than just miscellaneous letters,” Kotin said.

Graduate students and two members of the Class of 2022 who received special permission to attend the seminar were also tasked with scouring the PUL archives and finding something – anything – that has yet to be published and wrote about it. The project was based on the “Little Known Documents” section of PMLA – the journal of the Modern Language Association of America — in which researchers organize archives on unpublished documents.

“At first, I was surprised by how difficult the archiving work was,” Kotin said. “What does it mean to look at a letter, or even to know where to look? There are so many options in Firestone because it’s such a rich collection that students had a hard time figuring out where to look and how to figure out the item they were trying to look at.

“I took this course simply because I wanted the chance to examine canonical texts, and I was also really drawn to that component of working with archives,” said Grace Monk, a first-year graduate student in comparative literature. “It’s not something that a lot of upper classes do, although I think it’s something that a lot of people are supposed to do as part of their thesis, but they don’t really have a introduction before that.”

This serialized edition of “Ulysses” by James Joyce, part of the PUL Special Collections, appeared in The Little Review magazine, March 1918, published by Margaret C. Anderson in Chicago.