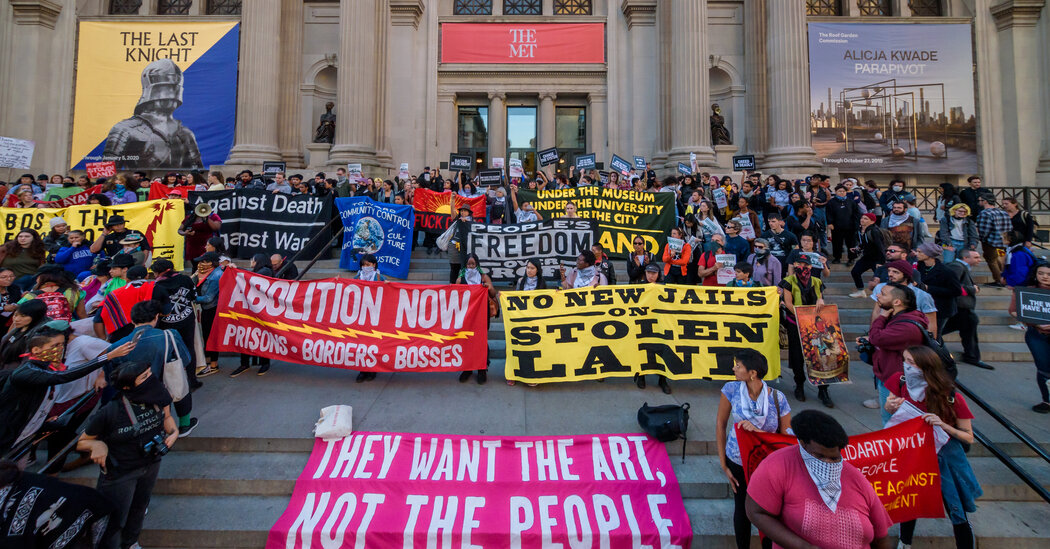 Artists bring activism in and beyond gallery spaces

One of the most iconic ancestors of today’s activist art collectives is the Guerrilla Girls, who were born in 1985 amid frustration with the commercialism of art. The Guerrilla Girls, who wear gorilla masks and use the names of deceased artists as war names, targeted onlookers in public with posters and slogans that questioned the status quo using language borrowed from advertising . “Do women have to be naked to enter the Met Museum?” Asked a 1989 poster, alongside a graphic of an odalisque wearing a gorilla mask, noting in the text that while less than 5% of the artists in the Modern section were female, 85% of the nudes were female. women. Then as now, critics of these movements suggested that there was some hypocrisy, as many artists involved in institutional criticism funded and exhibited their work in these same institutions. But that was, according to the artists, always the goal: rather than purifying the world of art, it is a question of freeing it.

“We always do street posters and banners denouncing museums, but we also say them directly on their own walls,” Käthe Kollwitz, longtime Guerrilla Girls member, wrote to me in an email (her name is a pseudonym). Their latest project, “The Male Graze” (2021), is a series of billboards that reveal a history of exploitative behavior by male artists. Their focus remains largely unchanged: “We say to all who care about art: ‘Don’t let museums reduce art to the small number of artists who have won a popularity contest among the big dealers, curators and collectors, ”writes Kollwitz. . “Unless institutions present art as diverse as the cultures they represent, they don’t show the history of art, they only preserve the history of wealth and power.

Revolutions, like art, begin as works of the imagination: a reshaping of the world in a new image. Nitasha Dhillon, co-founder, with Amin Husain, of Decolonize This Place, refers me to a 1941 essay by surrealist theorist Suzanne Césaire, in which she envisions a “realm of the strange, the wonderful and the fantastic.” … Here is the poet, the painter and the artist, presiding over the metamorphoses and the inversion of the world under the sign of hallucinations and madness. We can all agree that the world has gone mad; Can the art of calculus and trauma show us a way forward?

The point is, there is no plan for decolonization; nothing that involves people working together for greater justice is particularly utopian or wonderful. There will always be disagreements, imperfections, more to learn, more work to do. This kind of art is nothing if not an effort; it comes at a personal cost. And so, while groups like Forensic Architecture and Decolonize This Place have already had their proven success – in courts, in art spaces – I can’t help but think it’s the least measurable impact. who might, in the end, be the most powerful, as models of cooperation and correction in a cynical, self-serving and often violent world. If nationalism and greed are transferable on a global scale, then perhaps idealism is too. Responsibility, in the end, means paying attention to the suffering that pays the bill for our way of life, our comfort, and even our beauty. The fear of being canceled is, after all, the fear of facing these harsh truths and being found an accomplice. The question, perhaps, has never really been whether or not art can heal us, but rather to what extent we have the courage to heal ourselves.

Ditch literature, history books and embrace the hustle and bustle of start-ups: CEOs