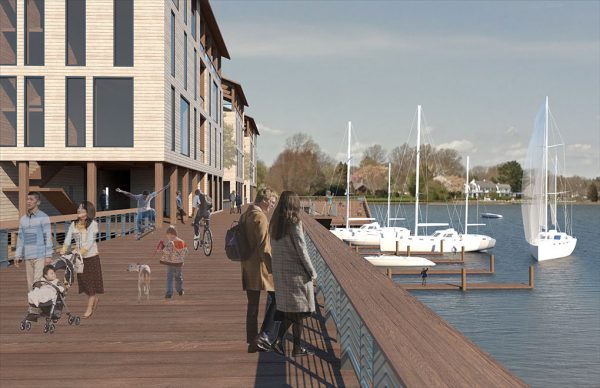 A team of students from the School of Architecture led by Julia Czerniak, Associate Dean and Professor, and Professor Ted Brown, have spent the past five months immersing themselves in the culture, values, history and peoples of two towns on the shores of Narragansett Bay, Rhode Island, as part of the Envision Resilience Narragansett Bay Challengewhich called on university students across the country to develop adaptive and creative solutions to sea level rise.

The students’ mission was to develop innovative pathways in the face of sea level rise based on the National Oceanic and Atmospheric Administration (NOAA) High Curve. Based on these projections, Narragansett Bay will see a seal level rise of three feet by 2050, five feet by 2070, seven feet by 2085 and nine feet by 2100.

“Instead of feeling anxiety and paralysis about climate change, we have a window of opportunity to imagine how to adapt and even thrive in the future,” says Wendy Schmidt, Founder of ReMain Nantucket. “While the challenge began as an exercise in big ideas, we hope it will also spur big action – in Narragansett Bay and in every coastal city around the world, where hundreds of millions of people live.”

Czerniak and Brown incorporated the challenge into their spring 2022 guest critique studio, “Design Scenarios for Adaptive Coastal Communities,” which takes the position that while protection is a way to cope with rising seas, we must engage climate change not only through mitigation but by re-examining our lifestyles and consumption habits.

“The overall mission is to redesign our world, not just save it,” Czerniak says. “There are a lot of wrongs that can be righted.”

The students focused on the town of Warren and the village of Wickford, two small, quite different historic coastal communities along Narragansett Bay that share a common future; they go slowly underwater. By researching moments of natural and cultural adaptation across time and across scale, visiting sites for field verification, and meeting with local experts and residents, they tested a set of scenarios design for each of the sites in order to adapt to the challenges of climate change. and be resilient to future changes through the prism of architecture.

Using scenario planning, an appropriate approach that provides a way to assert control over a rapidly changing world by identifying hypotheses and determining possible responses, the students set up the scenarios for each city in the form of IF, THEN statements, then isolated and tested what that meant. alternatively RETREAT & ADAPT (moving colonies to higher ground and proposing new, more climate-friendly lifestyles); EMBRACE & ENGAGE (remaking shorelines to participate in rising waters and opening them up for common use by human and non-human species); or PROTECT & ABSORB (preserving invaluable resources by innovating to stay put).

Responding to the needs of these communities, the students presented ambitious, bold and innovative ideas, challenging entrenched ways of thinking and presenting a radical reimagining of these coastal areas.

Known as the smallest town in the smallest county in the smallest state, the City of Warren, Rhode Island’s shores are bordered by Belcher Cove and Warren River. Although not as popular with tourists as its neighbors, Warren, once a bustling whaling and shipbuilding port, still draws a regular seasonal crowd to its waterfront and downtown area. Ancestral home of the Pokanoket Nation, Warren continues to depend on its coastal location for much of its economy, way of life and recreation.

Students Clara Faure-Dauphin ’23 (B.Arch) and Ayana Ayscue ’23 (M.Arch) focused on the RETREAT & ADAPT scenario by rethinking land use for higher density communities, for repair land and for public and ecological corridors of connectivity. In introducing mixed-use development on Metacom Avenue, the existing residential area, the team prioritized a retired land to retired land relationship.

RETREAT & ADAPT screenplay for the city of Warren by Clara Faure-Dauphin ’23 (B.Arch) and Ayana Ayscue ’23 (M.Arch)

Instead of treating the coastline as a barrier where the sea endangers people, team members Ruoxi Li ’23 (B.Arch), Muge Zhang ’24 (B.Arch), and Tony Fitzgerald ’23 (M .Arch) used the EMBRACE & ENGAGE Scenario to reimagine Belcher Cove as a multi-species commons that changes with sea level rise and can be used seasonally for recreation, habitation, and business. 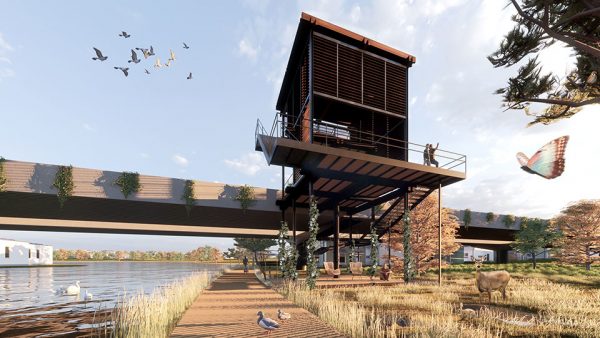 EMBRACE & ENGAGE scenario for the city of Warren, drawing by Ruoxi Li ’23 (B.Arch)

Students Khoi Nguyen Chu ’24 (B.Arch) and Zhuofan Song ’24 (B.Arch) focused on the PROTECT & ABSORB scenario by proposing a new recreational waterfront along Water Street, a major street near the coastline with a large commercial area that is exposed to the sea. Reviewing the city’s historic plans, the team postulated that the current coastline had lost its urban form and proposed to reintroduce it by designing a new climate-friendly development and economically generating: mixed-use housing with commercial spaces.

The original home of the Narragansett Nation, Wickford Historic Village sits on the west side of the bay and is one of the oldest preserved colonial villages in the country, dating back to the 17th century, with structures from the early 18th and of the 19th century. With a long maritime and fishing history, Wickford’s economy remains water-bound through boating, fishing and tourism. Its population is twice that of Warren and is a popular summer destination for sailing, shopping and fine dining.

The student team of Zhi Fei Li ’23 (M.Arch), Raquel Rojas ’23 (M.Arch) and Kaylee Holmes ’23 (M.Arch) studied the RETREAT & ADAPT scenario by rethinking the way people move across the lands to the heights. On Post Road, northwest of the existing village, they proposed a new intergenerational riverside community with ecologically rich social spaces for human and non-human species, sustainable dense collective housing, and new routes and types of transportation. 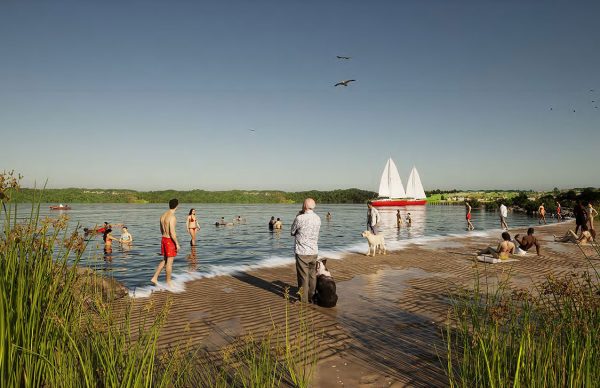 Using the EMBRACE & ENGAGE scenario, students Troy Schleich ’23 (M.Arch) and Ruth Shiferaw ’23 (M.Arch) proposed an adapted version of the “Wickford Walk” in contrast to the current historic walk connecting areas important in the city. Defined by its role as a historic seaside village, the new Wickford Walk offers three key areas – recreational, educational and ecological – that allow residents and visitors to embrace a new relationship with water. 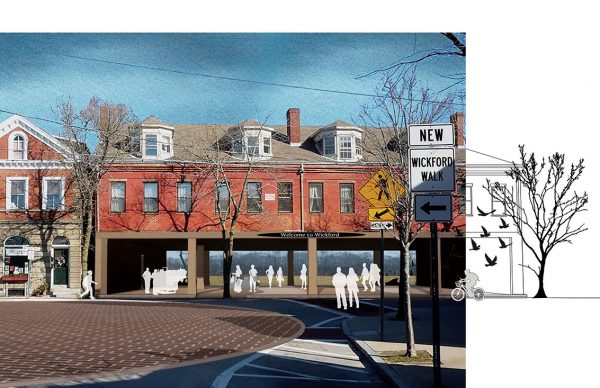 Students Parker VanderVen ’24 (B.Arch) and Yifei Xia ’23 (M.Arch) studied the PROTECT & ABSORB scenario, with a focus on historic assets threatened by sea level rise. choosing to protect Wickford’s historic district, the team rethought (over time) the preservation and engagement of the village’s colonial buildings along Main and Brown streets. Through alternative strategies such as the introduction of absorbent surfaces, the use of natural barriers, the elevation of buildings and infrastructure, and the deployment of new forms of immersive technologies such as augmented reality, they have proposed new ways to protect the memory of the village and to celebrate the history of Wickford. 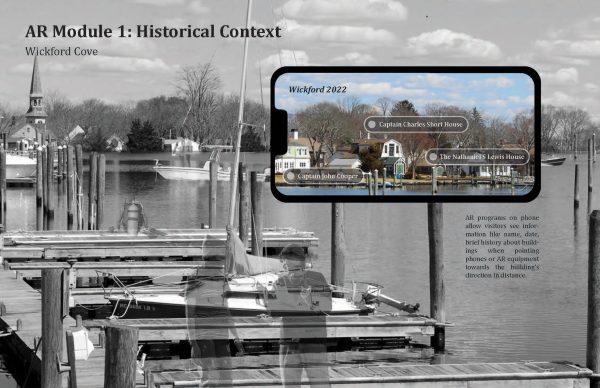 In late April, students pitched their ideas virtually to the entire Envision Resilience Challenge cohort, including teams from other participating universities, during a final jury examwho praised them for their clear and impactful proposals, their superb illustrations and their articulate arguments.

Students and faculty from the Syracuse University team at the opening of the exhibition “Envision Resilience: Designs for Living with Rising Seas”.

In addition, a month-long exhibition titled, Envision Resilience: designs for living with rising seaswhich features adaptive designs by teams of university students reimagining infrastructure, shorelines and neighborhoods in Rhode Island communities vulnerable to sea level rise, is currently on display at WaterFire Art Center, Gallery in Providence, Rhode Island. The free exhibition runs until June 26 and is open Wednesday through Sunday from 10 a.m. to 5 p.m. and until 9 p.m. on Thursday.

“We are thrilled to bring this exhibit to Rhode Island and support ReMain Nantucket in this important work,” said Barnaby Evans, Executive Artistic Director of WaterFire Providence. “This show is a wonderfully hands-on and engaging extension of the environmental conversations we’ve had here at WaterFire. These exciting proposals will broaden our thinking and enrich our perspectives as Rhode Island communities strive to find the best solutions to address rising sea levels.”

In pictures: See the best of Art Basel Unlimited 2022, from a painting made from hardware store finds to a sculpture turned into a shipping container