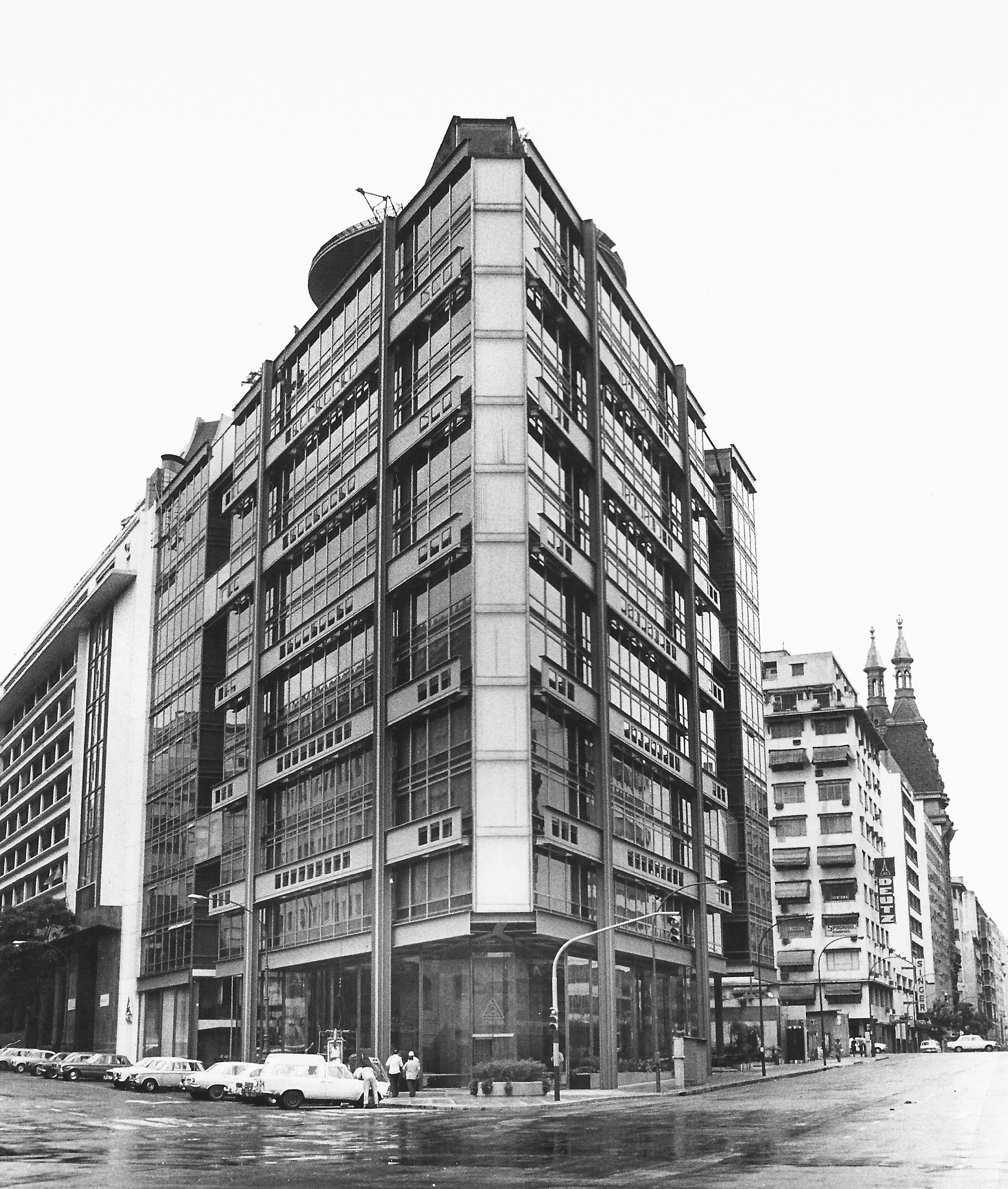 The Teniente General Castiñeiras building stands on a triangular plot in the heart of Buenos Aires, one of the most emblematic of modern architecture in the city. Better known as the SOMISA building, its origin is the result of a design competition for the design of the new headquarters of the Sociedad Mixta Siderúrgica Argentina company. The first prize was won by MRA+A, Mario Roberto Álvarez & Associatesand its construction began around 1966, with work being completed in 1977.

First building in the world made of folded sheet steel, the SOMISA building contributes to the urban completion of the morphological continuity of the block and represents a great technological challenge for the time by implementing a mixed structure, metal on the upper floors and H °A° in the basement. Through construction that made the most of the use of steel, a column-free floor plan was designed with a perimeter load-bearing structure that provided flexibility in reconfiguring workspaces, making manifest the idea of ​​industrialized modulation. Today the building houses the National Cabinet of Ministers.

Memoir of the authors. The headquarters of Sociedad Mixta Siderúrgica Argentina, located at the corner of Belgrano and Diagonal Roca avenues, was the first building constructed in Argentina entirely of steel and the first all-welded building in the world. Its structural elements, mezzanines, exterior enclosures and interior partitions are entirely made of this material, the basis of the country’s industry, and of which SOMISA was the main producer. A true technological and architectural revolution.

The projected building fully meets the objective of adaptability and flexibility, made possible by the perimeter steel support structure which avoids the existence of interior posts, the appropriate layout of circulation and the zoning of workstations.

Constructively, the building is divided, as it is functionally, into two parts. One is buried and built in reinforced concrete at a depth of 24 meters, and the other aerial is made up of a metal structure, all the constituent elements of which are made up of prefabricated and dry-assembled elements.

The entire perimeter of the building, which is glazed, is treated with heat-resistant glass thermo-panels and a double interior air chamber in a stainless steel frame for optimal thermal and acoustic insulation. The interior dividing elements are removable steel panels, which contribute to the flexibility of the building, including the sanitary facilities. The central air conditioning, electricity, intercom and telephone installations have been contracted with the latest modern technologies.

The following necessary functions within the organization have been clustered and zoned:

Two groups of vertical circulations have been designed to form the axis of the composition, allowing the public to circulate independently of employees and hierarchical personnel. The lift batteries have been grouped into a single core so that all lifts can be used at peak times.