Why does almost everything Commission I-195 touches turn out to be architecturally poor? How long will Providence continue to suffer from an agency that has failed to provide design leadership for an extremely important part of downtown development?

A pedestrian bridge crosses the Providence River at the site of the old Interstate Highway. The “planned site” marks the spot where the food and beverage pavilion is to be built. I-195 Development District.

Pedestrian footbridge with site for new toilets and restaurant just below on the right. PHOTO: Will Morgan

It is painfully obvious that plans to create a spectacular innovation district have been hampered by unenlightened vision. After having the audacity to remove a healing interstate highway from the edge of the river, the city then lost courage and allowed the piecemeal development of hotels, offices, apartments and parking for the city. most mediocre. Moreover, the idiocy of the proposed Fane Folly should have cleared any doubt that Commission 195 had any idea how to shape a city in an inspiring way.

An exception to the clown school planning process is the pedestrian bridge over the river (although this is not without embarrassing issues that could have been avoided by less political considerations). Now the commission has sought qualifications from architectural and engineering firms to construct a 4,000 square foot, $ 2.8 million building, widely labeled the Innovation District Park Food & Beverage Pavilion. The inappropriate location of the proposed service structure is at the western approach to the pedestrian bridge.

Considering the enormous popularity of the bridge, the jewel in the jewelry district, one has to wonder what sort of fuzzy thinking would locate the restrooms and hot dogs right at the entrance to the bridge?

Much needed public toilets have been installed for plot 14, just behind Brown’s information technology office at 220 Dyer Street. The restoration operation was to take the odd shape of this plot, a potentially picturesque place to eat. Mysteriously, the commission’s solicitation for qualifications moved the catering facility into the heart of the park’s open space, as well as mid-line of sight to the bridge and College Hill. Do we, citizens and taxpayers, know the reasons for the change of location? Or, maybe it’s just another example of incompetence?

Properties in the 195 development district. Commission 195

Even though the structure of the food and drink was a beautifully designed architectural object, this diagram placed it wrong. The pedestrian bridge is a real asset, but the location of this pavilion will diminish the value of the beloved signature piece of waterfront renewal. The building must be something special, a jewelry box, something to write on. It requires a sensitive architect to design it. 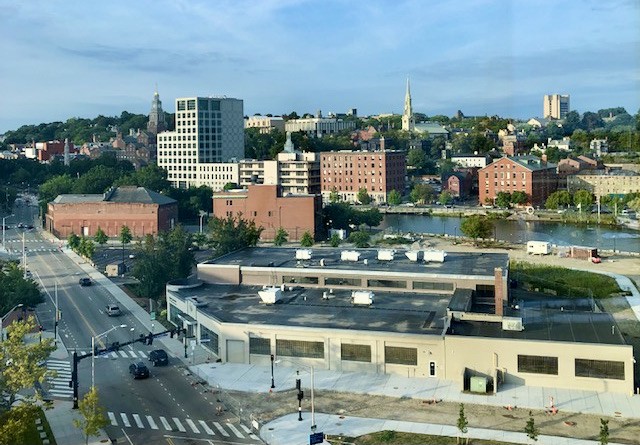 Instead of an open competition, for example, which could gain national attention, the RFQ seems little more than a superficial trolling of the usual developers. And it’s not clear whether the qualifications are accepted only by Rhode Island architects, or whether the commission could cast its net over a larger area. The quality of the design does not appear to be the goal, despite the standard claim that they are looking for “striking architecture that will create a new landmark”. The commission has its own design office and catering consultants (are we aiming for a food truck or a Michelin-starred restaurant?). By stating that respondents should “exclude landscape architecture” from their response, the committee further limits designers.

One obstacle to achieving the commission’s goal of “creating an active and vibrant open space” is that it is made up of presumably well-meaning officials who are not trained to design cities. The commission is made up of lawyers, businessmen, a casino operator and a medical school professor. How can we not have members from the design professions, such as architects, landscapers, town planners, engineers and curators? (What kind of advice does the Boston Commissioners’ architectural consultant give Providence? Is he fronting or offering sound advice that goes unheard?)

It seems unlikely that we could get a high design for “highly visible public equipment” from the I-195 Commission, given their failing track record and lowest common denominator. A magnificent opportunity to reshape an important part of Providence into a truly creative capital has been traded for mind-numbing mediocrity.

Most of the larger plots carry the aesthetic mark everywhere and anywhere from the board, so we can’t afford to let the remaining open parts be developed under its auspices. Providence must demand better, more design-oriented planning for Lot 195. It is time that Commission 195 be enlarged with design professionals or dissolved.

William Morgan graduated in Restoration and Preservation of Historic Columbia Architecture. He taught at the School of Urban Studies at the University of Louisville.

Bhopal Literature Festival will be held from January 14