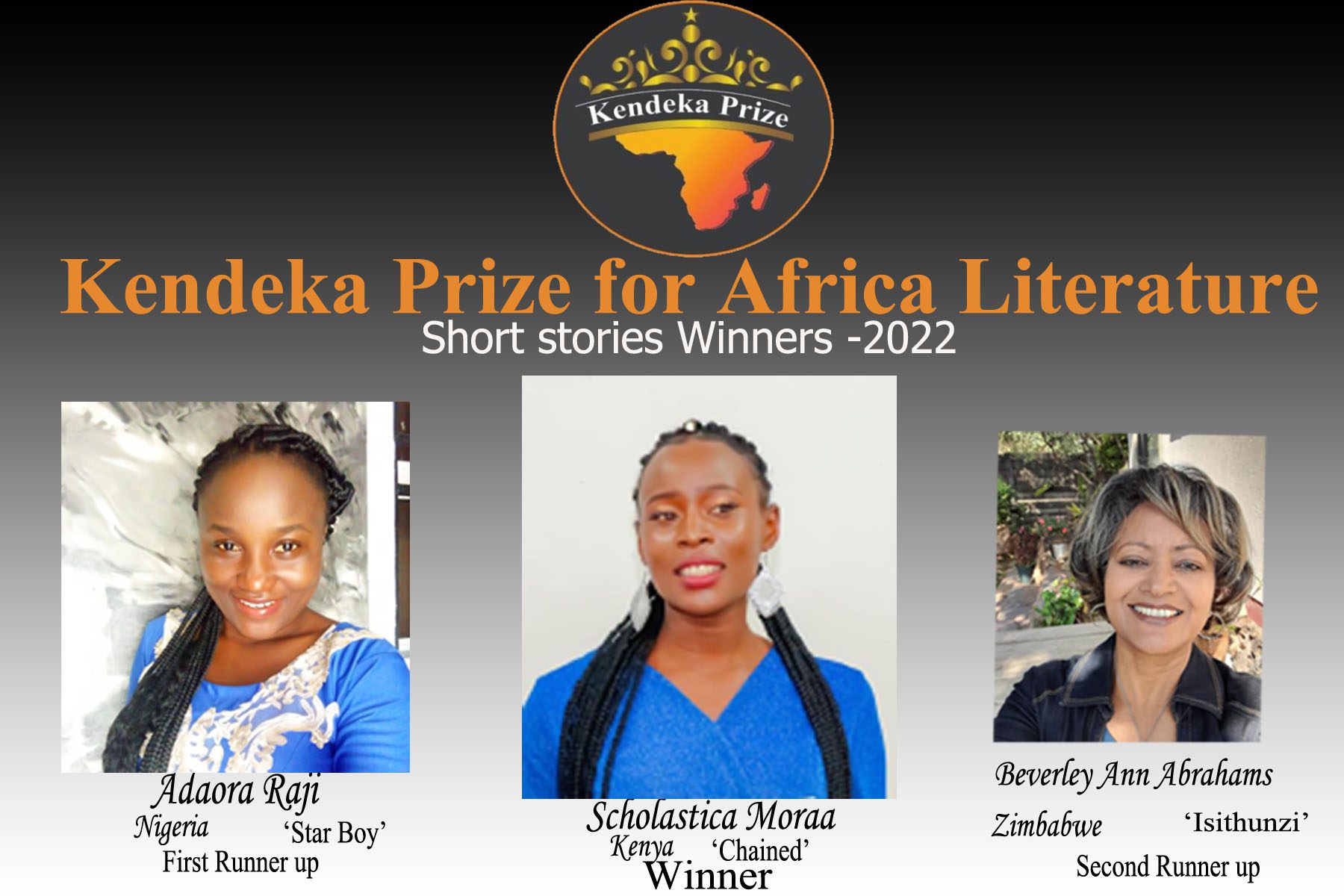 The grand winner of the Kendeka Prize for African Literature 2022 has been announced. Scholastica Moraa, from Kenya, is the big winner announced for her short story “Chained”.

The winning stories were chosen after a rigorous process by a panel of three judges chaired by Dr Siphiwo Mahala, from South Africa. Bisi Adjapon from Ghana and Faith Oneya from Kenya were also part of the panel. In their statement, the judges had the following to say: “Each writer who has put their ideas to paper and submitted their story for consideration in this award adds a unique voice to the African literary tradition. The wide range of themes, narrative styles and images tell the story of a continent in the midst of a literary revolution. Academics may not yet coin an appropriate name for it, but these new voices are redefining the African literary tradition in their own terms.
The winners were announced during the awards ceremony held at the TAS TV studios in Thika. The overall winner will receive Kshs 100,000, while second and third prizes are Kshs 50,000 and 25,000 respectively.

Here are the biographies of the winners;

Scholastica Moraa – Overall Winner
(Chained), Kenya
Scholastica Moraa is a Kenyan author and poet. She graduated from Jaramogi University with a bachelor’s degree in Actuarial Science. She is the author of a collection of poems entitled “Beautiful Mess”. One of her short stories “6 Days to Twenty” was long listed in the 2021 Kendeka Prize for African Literature. When she’s not writing, she’s deeply immersed in a novel or two. She likes to travel, make new friends, learn new languages ​​and think too much

Adaora Raji – The first finalists
(Star Boy) Nigeria
Adaora Raji works as a writer and content producer for Playroom Media, and earned a Bachelor of Arts in Broadcast Journalism from the University of Benin, Nigeria. His fiction has appeared in Arlington Literary Journal, Midnight and Indigo Literary Journal, Coachella Review, Bookends Review and was on the 2021 Toyin Falola Afrofuturism Prize Anthology list.
Beverley Ann Abrahams – The Second Runners Up

Beverley Ann Abrahams is a Zimbabwean English and art and design teacher, writer and campaigner against gender-based violence. It has been published in two anthologies of international poets: “Ps: his poetry” (2020) and “Ps: his motionless poetry” (2021) https://www.amazon.com/dp/B08P1P6MB8 It has been published in a regional poetry anthology of women human rights defenders of the Sadc in 2021: “Mwala: The Rock https://www.dropbox.com/sh/pemiz7j4krzl7sn/AABmQTbYovQhWmQratGhCSh3a?dl=0
It was shortlisted for the 2021 Intwasa short story competition and is featured in their second anthology of Zimbabwean short stories. Beverley is a single mother of four amazing children.
The biographies of the 2022 judges are as follows;

Siphiwo Mahala is an academic, short story writer, novelist and playwright. He is a graduate of the University of Fort Hare, holds an MA in African Literature from Wits University and a Ph.D. in English Literature from the University of South Africa. His first novel, When a Man Cries, was published in 2007. He is the author of two critically acclaimed plays, The House of Truth (2016) and Bloke and His American Bantu (2021), two collections of short stories , African Delights (2011) and Red Apple Dreams and Other Stories (2019), and a biography, Can Themba: The Making and Breaking of the Intellectual Tsotsi (2022). He is a senior lecturer at the University of Johannesburg, South Africa.

Bisi Adjapon is the author of The Teller of Secrets, a Washington Post/Essence/Globe and Mail Top 20 Novel published November 2021 by HarperCollins. The short version, Of Women and Frogs, was nominated for the Caine Prize. Her second novel, Daughter in Exile, will be published by HarperCollins in March 2023. She has written and been featured in numerous publications, including McSweeney’s Quarterly, Washington Post, Ms Magazine, Aljazeera, New York Times and Washington Times. She founded and led the Young Shakespeare company for four years in America, and as an international affairs specialist for the US Foreign Service, she won the Civil Rights Award for Human Relations. As an educator, she has won an Excellence in Teaching Award and is a member of The Who is Who of America’s Best Teachers. She divides her time between Ghana and America.

Faith Oneya is a media practitioner, opinion columnist and creative writer. Her articles have appeared in several publications, including the Standard, African Woman Magazine, Daily Nation and EastAfrican. His short stories have been featured in several anthologies, the latest being Nairobi Noir (2020). Her children’s book, The Girl with a Big Heart (2018), has been approved for use as a classroom reader by the Kenya Institute of Curriculum Development.
Faith holds a Master of Arts in Digital Journalism from Aga Khan University, Kenya and a Master of Arts in Communication from the University of Nairobi, Kenya. She also holds a Bachelor of Education (English and Literature) from the University of Nairobi, Kenya. She is a member of the Kenya Editors’ Guild and the Association of Media Women in Kenya. She is also a member of the editorial board of the Jahazi Arts Journal.

The Kendeka Prize for African Literature is an initiative of Andrew Maina, a Kenyan writer whose aim is to encourage Africans to write and read more. The winner of the 2021 award is Jenny Robson, from Botswana, for her story, Water For Wine. Fatima Okhousami from Nigeria was the first runner up for her story, The Women of Atinga House, while Okpanachi Irene Ojochegbe from Nigeria was the second runner up for her short story, Au Pair.