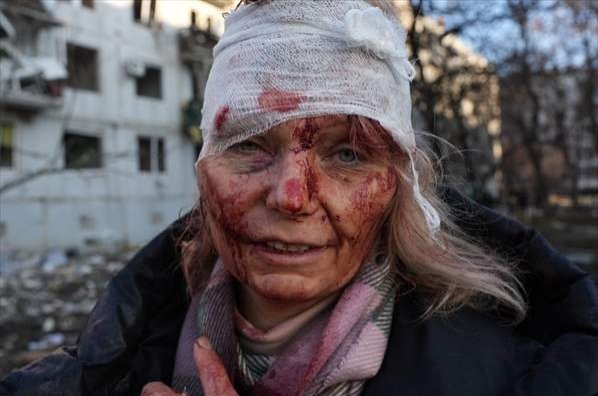 An oil painting by American artist Zhenya Gershman of a photograph taken by Anadolu Agency (AA) photojournalist Wolfgang Schwan in Kharkiv, Ukraine, during the Russian military invasion, has sold for 100,000 $ at auction in the United States.

A statement from Heritage Auctions says Gershman painted an oil painting of the photograph of Olena Kurilo, with a bandaged head and blood on her face, taken by Schwan during the February 24 Russian military operation. The iconic photo has become the symbol of war, revealing the brutal face of the Russian military operation as an example of the humanitarian crisis in Ukraine immediately after it was taken.

The statement added that proceeds from the painting, titled “First Face of War: Intimate Portrait of a Ukrainian Professor, 2022”, will be donated to the Ukrainian Red Cross.

“You see that civilians are the ones who suffer the most because of this conflict. In any conflict, it is very important to highlight the suffering of people who are not active participants. It helps us to see the suffering of terrified civilians “Schwan said. said in a statement about the photo he took.

Painter Gershman has also expressed her belief in the power of art and said: “I believe that a simple act of depicting truth in a painting can change the world. I was an idealist and I knew something good would come of this work.”

Keep up to date with what is happening in Turkey, in its region and in the world.

Tearing: what is Japanese literature? | Books